BBM4: An Answer to Old Yearnings 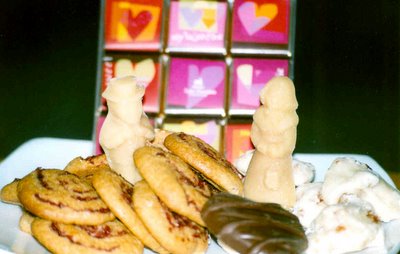 It's uncanny how someone in this whole wide world , previously un-met, practically a stranger, should know your wants and desires, be they conscious or subconscious/unconscious, even those that are not prayed for.

I've been participating in the Blogging By Mail series since I started this blog, joining in from BBM2. From then on I have received a total of five care packages from across the globe. If it doesn't count - BBM is only up to 4 presently, after all, so I've only joined in three - that's because I've had extra packages for an exchange among readers of Chocolate & Zucchini, and an extra one organized just between me and Swan, who sent me sugus and other treats from Netherlands.
But the latest one I've received, for BBM4 organized by The Food Ninja, is sort of the most mystical one, in the most pleasant sense. In her handwritten letter, Cathy, of the Mondays with Maida and Dining with the Bloggers fame at My Little Kitchen, and also the organizer of the preceding BBM3, described nonchalantly the contents of the package she sent. Little did she know the impact it would have on me. 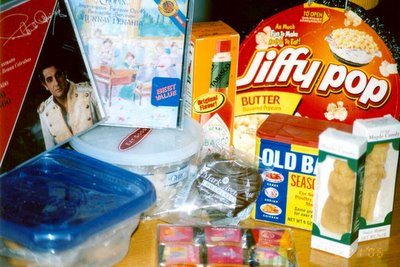 Cathy wrote she is always hard-pressed thinking what the state of Maryland in the United States, where she lives, is known for. She decided to throw in, unwittingly, a can of Old Bay Seasoning, to represent the Chesapeake Bay region.
Last year Marketman featured crab cakes and crab soup, using Old Bay Seasoning. I love crabs, and I love crab cakes and crab soup, and I've found no decent restaurant which served good crab cakes. So I bemoaned the fact that I could cook some crab cakes but that the critical seasoning is not available in the Philippines. Marketman so generously offered a spoonfull or two if I could attend his eyeball, but I had a prior engagement and missed the chance. And so I had been on the lookout for Old Bay ever since.
Thanks to Cathy, I can now stop prowling the groceries and specialty shops in the country. The seasoning has been put to good use right away - several recipes are printed on the can, and I've tried out two already - the results are real yummie! I'll be trying out the others, plus Marketman's recipes, and Cathy's suggestions.
I would have been so grateful if the seasoning were the only content of the package. But of course, there was a lot more, thank you ever so much. There was a bottle of Tabasco sauce, Jiffy popcorn in its own grilling pan, and homemade cranberry pinwheels and opera creams - yummy vanilla-pecan creamy candies, recipe included - the last one a clever inclusion in keeping with the theme for BBM4, which is music.
There are treats from Vermont, where Cathy hopes to retire in the far future. Maple sugar candies came in the shape of a man and a woman. Between them are a heart-shaped chocolate with strawberry mallow filling and dark and milk chocolate conversation squares as post-valentine treats.
To round it up, my musical gifts consisted of a compact disc containing highlights of Georges Bizet's popular opera Carmen, with no less than Placido Domingo singing the part of Don Jose, and a recording of Murray Perahia playing Frederic Chopin's impromptus, fantaisie, barcarolle, and berceuse. Both are precious additions to my collection, the latter one acquiring sentimental value because I studied Chopin for years when I was a kid.
Of course I never graduated to the level of difficulty of the recorded Chopin pieces, but I bet Cathy never even knew I play the piano. Or that I have sung some major works by the masters.
A million thanks to you, Cathy, for the bundle of long-lasting happiness you sent me.
Posted by Kai at 9:42 AM

Hi Kai - I'm so happy you enjoyed the package. In these days where it seems like you can go down the street and buy anything you want from anywhere in the world, it's hard to know what local products are unavailable in other parts of the world. I'm happy I hit on one and on one you were wishing for!

Right on the spot, Cath!

Kai, I am so glad you have that familiar tin of Old Bay Seasoning now... keep it in the fridge to keep it fresh longer. Use it on crab cakes, steamed crabs with lots of old bay on the shells, in crab and vegetable soup or chowder, etc. Enjoy!

Have I ever thanked you properly for the offer, Marketman? Thank you, and thank you for the recipes. I'll be doing the crab cakes tonight!

Did you know I first joined this swap last January and my parcel never arrived. Well my parcel arrived in Scotland, whoever sent to me all I said was thank u.. never got here in Greece


I will be more than to send u goodies
but I will have to use my mafia network here via uuwi..

Hello Kai! Thank you for the wonderful package. It seems to have brought some sunshine with it! I posted about it on my blog this morning. Come see. www.lindystoast.com.