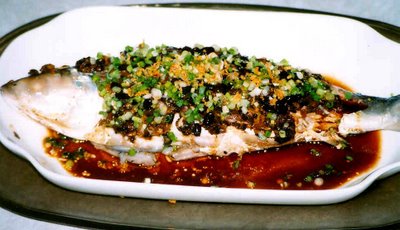 I adapted this from Yan-kit's Classic Chinese Cookbook (© 1984 Doubleday Sydney and Auckland). The recipe is categorized under Western (China) or Szechwan Menu, and calls for either rainbow trout or grey mullet. These fish I've often read about but have never seen hereabouts (trout lives in freshwater with temperature of 12 degrees C in summer). There is a local freshwater fish I know that looks like a mullet (talilong), but it rarely grows to the size specified in the recipe (350 grams in weight).
Bangús or Milkfish, Chanos chanos (Forsskal) is the most common fish in the Philippines which is found (marine) and cultivated (freshwater) across the archipelago. Of course the taste and looks vary, but I'm not about to go into that, yet (again, I reiterate that I'm a Pangasinense so where my loyalties lie should be transparent enough). Along with bangús is probably tilapia, too, since I heard it is even cultivated in Lake Sebu in Mindanao (and wherever I go, for that matter, across the globe).
My lethargy, from the summer heat, has been getting the better of me lately. I've been assembling and cooking (or not) easy dishes, and this is one of the easiest ones so far. It just involved steaming the fish (placed on a heat-proof dish that sat on a steamer for about 10-15 minutes, with peeled slices of ginger inside the cavity) with a mixture of mashed black beans, half a teaspoon of sugar (brown) and crushed garlic on top.
When the fish is cooked (flesh is flaky), some spring onions are cut into small rounds and sprinkled on top of the fish. Smoking hot oil is is poured over the spring onion to cook it just so. Remove fish from the steamer and pour two tablespoons of soy sauce. The skin is then scraped back and discarded, the condiments put back as topping on the fish.
I used bangús (more than half a kilo in weight) in this dish because I thought of the Filipino dish bangús tausi/bangús con tocho, though I've never had bangús steamed. A good experiment since I try to avoid frying fish as much as possible. Bangús lent well enough to the condiments, which was a bit salty, and very nice to pair with the thick, sweetish flesh. Next time, though, I'd add a bit more sugar to tame the saltiness.
Yes, there's a next time for this. I like it, it's simple enough and fast enough to prepare, yet it provides a complexity and depth of flavor. I added fried garlic bits to the topping, which added more crunch and an extra dimension in flavor. I also put more soy sauce (in recipe it is 2 tablespoons), but reduced the oil by half (recipe indicated 4 tablespoons).
I welcome any new way to eat bangus, or any other local fish. In the future I'll try other fish varieties that are good for steaming. Like pompano/pampano, talakitok (trevally), even tilapia. I'm eyeing fresh alumahan (Indian mackerel - so that's why it tastes like the canned mackerel sold in supermarkets!), too, although there's a different Szechwan recipe for it in the cookbook, and I want to try that, too.
Posted by Kai at 5:11 PM

god am salivating
cant remember eating steamed bangus
pero i would love to treat your for trout....

I will post my recipe for steamed tilapia, sarap din noon.

Definitely, I'll try this one. Thanks.

Uy, Toni and Lani, pahingi, I've never had steamed tilapia before. Unless you count the tilapia wrapped in aluminum foil and grilled.