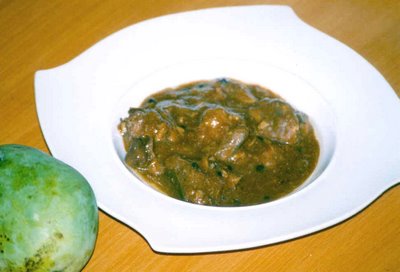 [Adobo sa mangga/Chicken stewed in green mangoes]
Name me a single Filipino who doesn't love - adore, be fond of, or even minimally like - adóbo, and I'm sure you'd be hard-pressed thinking of one. Adóbo is the quintessential Filipino dish, componentially salty and sour, its flavors in such a potent level because it will be eaten with bland steamed rice.
And yes, how many Filipinos have eaten plate upon heaping plate of rice with adóbo in many differing variants? I'm guessing almost every one, if you ask me.
As for me, I could live on adóbo every other day of my life. I could even venture to say every day of my life, if not for the fear of being branded as exagerrated. The late food doyen Doreen Fernandez once ventured to say that adóbo may have been assimilated from the Mexican adobádo, which basically uses the same ingredients but is now more related to the sweeter Filipino asádo.
We benefited a lot from that colonial Acapulco-Manila galleon trade, which we owe a great deal for our local (localized) fruits and dishes, but, as is wont to happen over the centuries in every exchange, we have indigenized these to have their very own Filipino identities.
And now it is our turn to introduce our own adóbo to the rest of the world. Filipino restaurant Cendrillon in New York serves it. And in every trip abroad, it is the dish, along with sinigang (meat or fish in soured broth), cooked by Filipinos for non-Filipino host families. I once cooked pork adóbo for my host family in Kanazawa City, Japan, during a cultural exchange program, and my otósan (host father) said it is good to eat with beer.
Japan is of course still Asia, and I was in luck because all ingredients for a decent adóbo were accessible. But I was not so lucky in Aarhus, Denmark. Or make that - my host family was not so lucky, to have had me. There was no vinegar (up to now I wonder why), and soy sauce. Without those main ingredients I was doomed.
But I could not think of any other dish to cook (it was then in my self-imposed, cooking ignorant life). So I persisted, and found a lemon (to sub for the vinegar) and, would you believe, a vegemite (or maybe it was marmite since I was in Europe, I cannot exactly recall). Silly me, I thought marmite could sub for soy sauce since I knew, from all the uneaten jars (courtesy of a balikbayan aunt) left to rot in our refrigerator if not for masochistic me, that it was salty.
I've learned now that sometimes we should not push our luck too far. Back then I was young, and so I made a lemon-marmite adóbo. Up to now I still feel pity for my host family. I just hope they threw the black-as-dinuguan (pork blood stew) dish in the garbage bin. I never knew how they reacted to it because I was left alone in the house to cook, and had long been gone to another country when it was time for them to come home.
Which is not to say that adóbo is not versatile. It is - it can use many different souring ingredients, and there are variations that do away with soy sauce entirely. Of course I know that now. But vegemite/marmite can never be put in an adóbo, I assure you. And that is one big understatement. Eating it alone or on toast is such a punishment for non-Australians and non-British - it has such a powerful flavor that is, to say the least, an acquired taste.
In my new life, I cook adóbo in the most common way - a layer of crushed garlic on the bottom of the pan (I prefer a garlicky adóbo), to be topped with rinsed cuts of chicken that had been patted dry, then splashed with soy sauce and vinegar (no measurements, just tantyá, or an approximation), and sprinkled with whole peppercorns and bay leaf. The pan is covered, and the adóbo is allowed to cook by itself over low fire until tender and the sauce is thick. I'm a Pangasinense, so there's no place for any sweet hint in my savory dishes. Especially in adóbo.
Adóbo sa manggá is another dish I first ate at Cafe By the Ruins in Baguio City. Pangasinan is mango country, and we incorporate mangoes in various dishes, but unripe ones are usually used to sour only sinigáng na bangús. Chicken adóbo soured by mangoes was a novelty for me.
Not just a novelty, though. It was a great discovery. Being partial to anything sour, I liked instantly the innate tartness an unripe mango brings to an adóbo. It clashes with the saltiness of soy sauce on the same level - not overpowering, but having the same strength, both dominant at the same time. Your tastebuds are then left in a quandary deciding which taste is more forceful.
Adóbo sa manggá is cooked just like the common adóbo, substituting the vinegar with slices of an unripe mango. A whole carabao mango is enough for a kilo of chicken - it is that sour (don't use the Indian and pajó varieties). And exclude the bay leaf. One time I forgot to instruct the househelp to forego it, and the adóbo came out tasting like a sour mango chutney.
This adobo is dark - kayumanggíng kaligátan - because there is no other liquid to dilute the soy sauce. Brown, is beautiful. Quite tasty, too. And, like all adóbo and all Filipinos around the world, very much comforting and makes you feel so at home.

yay to our Adobo! wow another great discovery from you Kai! manggang hilaw as souring agent! is there a hint of sweetness when this is used? as you may know, i want my adobo sweet...galing nito ah! patikim?

Hi Kai! I cant wait to try this one. Adobo is a favorite. Green mango is another favorite. But I havent tried mixing the two together. The way you describe it, it makes complete sense. Thanks for this great post!

I think this is a wonderful idea! You just made this great Pinoy dish a lot Pinoyer ;-)

I never had Adobo sa Mangga before but I can combine the two separately but not into one dish...

Wow its amazign! So where did you get the idea Kai? With my curiousity baka pwedeng matikim na rin...

Mabuhay ang Adobo! Mabuhay! Your recipe looks interesting, i might try it myself.

BTW, Have you read "The Adobo Book" by Reynaldo Gamboa Alejandro and Nancy reyes-Lumen, they have collected hundreds of "traditional and jazzed up recipes" for adobo. This one of yours might land in one of their next volume!

About the adobo without soy sauce, I've tried once at home cooking puting adobo. I ran out of toyo and the sari-sari store wasn't near enough to save me,I used salt instead. With lot's of garlic and a dash of sukang paombong (only a dash because I was afraid I might turn it to paksiw, he-he), the result is not that bad at all! Medyo may pagka- ugly duckling nga lang compared to the usual adobo color.

No Ces, it's so tart you'd feel your teeth tingling! Maybe you could add some ripe mango slices when you do this. Where are you na?

TC, for me both are also favorites and beforehand I never knew the pairing could work, too!

C, Oh, yes, now this adobo can never be traced back to adobado, can it?

Hi Tin, yes, we eat unripe mango slices as a side to other savory dishes as well. Pampagana, kumbaga. I first ate this at Cafe By The Ruins in Baguio and have been smitten since. So when it's mango season I cook it as often as I can.

Hi, Jhaw, yes, there's about 250 adobo variants listed in that book. I've learned from a friend that in Cavite (at least in Kawit) their adobo is sans toyo, but they put in red coloring from achuete to achieve the adobo colored effect. Salt is not even added, but fatty pork is used which is allowed to fry in its own fat, rendering it a bit salty. That is one kind of adobo I've long been wanting to cook and document. Maybe after Holy Week!