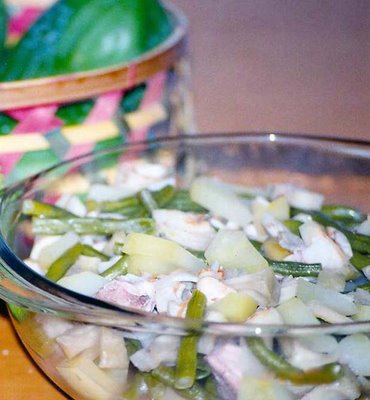 [Papaya and string beans]
In Pangasinan we have no name for this vegetable dish, as with other vegetable pairings, like salúyot tan labóng, or kalobása tan marúnggay.
What I call it here, as with the other examples, is by the names of the two vegetable ingredients, apáyas being the Pangasinan term for papaya, while agáyep is sitaw, which is called string beans in English, but the name string beans in the US actually pertains to another pod much shorter than our sitaw.
As a digression, let me add that sitaw is called batong in the Visayan language (Cebuano). Batong sounds related to balatóng, which is the Pangasinan term for the lowly but noble munggô or mung beans.
While they're two different bean varieties, balatóng is actually harvested from pods which look like batong or sitaw. And then, sometimes we open up mature agáyep (batong) pods to get the beans when the pods are already inedible, cooking them like a balatóng. Of course the agáyep beans are softer.
I prefer the shorter sitaw, which is less than a foot long, greener, and has thinner skin than the more common and longer sitaw. There is less insulating white pulp covering the beans, so the pods are firmer and look "skin-tight." This sitaw variety has more flavor, and there are times in the year when they are sold in the morning market mostly shelled - like soft mung beans with a few unshelled pods here and there. 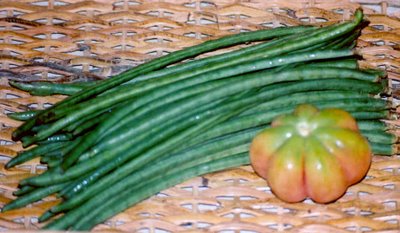 Anyway, in Pangasinan when we ask the cook to prepare vegetable dishes, we just say what vegetables to include. It is actually automatic because it has been established how one complements and enhances the other.
And all native vegetables are cooked the same - in the method called sinágsagán. So if I am asked what I have cooked, I will simply say the names of the vegetables I put in the pot.
Of course not all vegetable dishes don't have names in Pangasinan. Like we have pakbet, or pakbet tan kalobása (with squash, which is the Ilocano bulanglang).....and....., I can't think of anything else. So mostly they are identified by what they contain, the vegetables just enumerated.
Probably this is the case because the dishes are so simple and so homey, that they did not merit being named. Almost all vegetable dishes in the province I have never encountered elsewhere, but it existent in the Ilocos and Batangas provinces, with whom we share the sinágsagán method of cooking vegetables.
I actually stop in surprise sometimes - because whenever I am away from the province, I so miss and crave for these specific vegetable dishes. The salty smell of bagóong boiling away merrily, and then that of the green notes of the fresh vegetables - they evoke the comfort of home and homecooking.
Looking back at the child who cried in anguish because she actually had to eat the vegetables served frequently (daily, without fail), I never foresaw I would come to this day. That I would actually crave what I used to hate. And even to the extent that it could take on the identity of comfort food.
Agáyep tan apáyas, or vice versa - let's call them AA for short, smells of sinágsagán coupled with the unrealized sweetness of the thinly sliced unripe papaya, punctuated by the deep greenness of the sitaw, which is broken (by hand) into several (about three to four) pieces, removing the string on each side.
This is the basic pairing, and can be served on its own. A piece - preferably the head - of grilled bangus, the favored flavor enhancer of provincial vegetable dishes, ups the allure of the dish, elevating it to almost gourmet status (of course I'm exaggerating, but it's not really far from the truth). 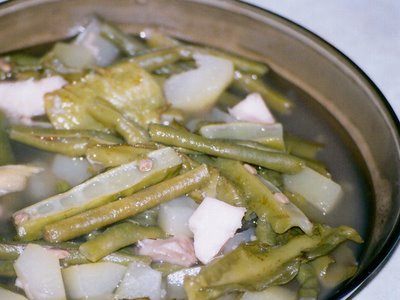 For variety, other vegetables can be added. Here we have bungá'y cabuéy, the fruit of that climbing vine which is considered a weed - called sigarillas in Tagalog (sigadillas, seguidillas, winged bean, Goa bean, asparagus bean).
In the first photo, the dish contained kamansī (kamongsi, breadfruit, Antocarpus camansi blanco), which is prized for its breast milk inducing capability. 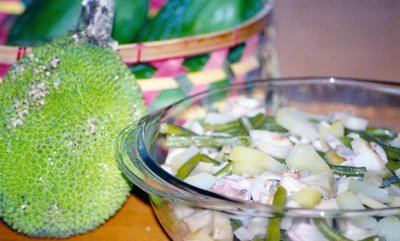 Kamansī is another vegetable I crave for when I'm out of Pangasinan, but this post is already too long, so I will leave that for another time.

wow, sarap! i like those vegetables, too! i remember my aunt's husband, who hails from bugallon, pangasinan cooking those vegetable dishes when i would spend some days with them in summer. now, i'm craving for them!

Kai,
Do you still stay in Pangasinan? The reason for asking, because I would like to ask if the "arimas" fruit is still available. It reminds me that fruit because of the "kamansi". "Arimas" fruit is ls like "langka" but it is boiled and mashed with butter, milk (condense) sugar then chilled. I used to eat for snack when I was a kid. I am taking my two weeks vacation by the end of May this year at Pangasinan. I missed that traditional fruit since I left Philippines 17 yrs as of today.

BTW the vegetable you mentioned is worthwhile to note and I will make sure that sinasagan will be part of my diet there... :-)

hi kai,
in batangas or at least in my town we call that kibal and we cook it bulanglang with papaya too and squash blossoms or tops. good with sinaing na tulingan or kahit anong luto basta isda.

looks very delicious. But too bad since I can't find those ingredients here probably i should rumage around the asian shops

Yo, glad you liked it. I could not have said the same thing if you had asked me when I was a child, haha.

Bert, I'm away now but we do go home regularly. Kamansi features regularly in our diet because my in-laws have two, very productive trees, and because I have had two kids in the last four years. In the absence of malunggay leaves, kamansi is the best alternative, according the biyenans.

Now for the arimas, which we call pekak, we cook it like kamansi, too, but rarely. I haven't seen one in a long time, actually. But maybe only due to the fact that it's not a favored alternative to kamansi in my hometown, probably because of the numerous seeds exploding in your mouth as you eat it (I hope I'm talking of the same thing as you are). And you know what, I haven't even eaten any sweetened pekak. Now I'm going to find out why and will be pestering some oldies. I'm really grateful that I'm learning so much about food in general and Pangasinan food in particular, thank you for your inputs.

I hope you do find arimas when you go home. Let me be the first to greet you welcome back home for your impending trip. Have a safe one, and don't forget to insist on manibok ya bagoong!

Alilay, thanks for letting me know about kibal. Now I really wonder why we don't have a name for it. I have many friends from Lipa, and one vegetable dish served to me which I love is a soup of squash, malunggay leaves and corn flavored with bagoong Balayan, which I don't know the name of and which we don't have in Pangasinan. I hope to write about it soon.

To the anonymous commenter, thanks for letting me know. It seems there are many Ilocano versions of dinengdeng and inabraw.

Chas, I hope you do find some, including bagoong!