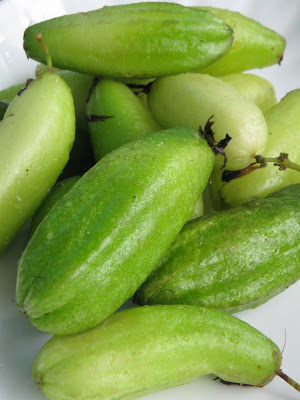 Pias is the Pangasinan term for this fruit (Averrhoa bilimbi, of the family Oxalidaceae) that is one of the many souring agents used in sinigang (soured clear soup) across the Philippines.

Equivalent term in other Philippine languages:
It is called "cucumber tree" or "tree sorrel" in English (weird). It is grown and utilised, as food or food ingredient, in Asia and South America. In the Philippines it is more like it grows on its own, as it is not really cultivated but it is found extensively in the width and breadth of the archipelago, in backyards and farms and along paved and unpaved roads.

In Asia it is commonly referred to by its Indian name, bilimbi, which strongly influenced how it is called in other Asian languages - belimbing, billing-billing, balimbing, blimbing, taling pling, kaling pring.

In Southern American countries it is variously known as blimblin, bimbling plum, grosella china, mimbro, tiriguro, vinagrillo, birambi, pepino de Indias. There is a French term, carambolier bilimbi, or cornichon des Indes, though I doubt if it can be found there, much less eaten. 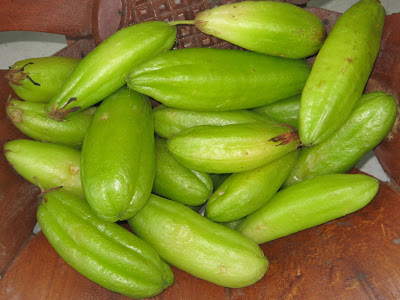 Pias, in the Philippines, makes its appearance in markets at the onset of summer (around the end of February), or even earlier, but it is hard to find during the rainy and cold seasons (August to January).

But that is just about right, because pias is used mainly in sinigang, the Filipno soured soup with either meat or fish, that is served during the hot months. It is served hot, like most soups are, but the sourness of it refreshes and cools, and so is apppropriate for the blazing tropical summer.

The fruit is very tart, but in soups it is a mild souring ingredient. It is actually one of the least potent in the array of Philippine sour fruits used in sinigang. I believe it is just a notch above the tomato, which is considered the mildest peres (the Pangasinan term for the souring ingredient in sinigang), and half a level below the kalamansi.

And so pias, and the tomato, as well, is used to sour only the sinigang that contains fish. And not all fish, but only freshwater fish, or marine fish that have delicate flavor. Deep-sea fish requires an ingredient that imparts a more forceful sourness, while meats (chicken, beef, pork, goat) use the most powerful of them all, sampalok, or in the case of the islands of Panay and Negros, batwan. 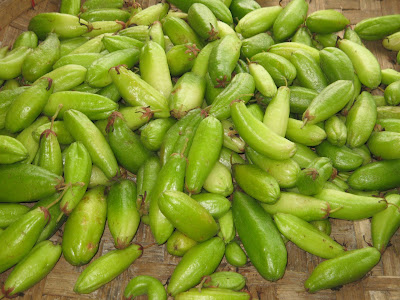 When it is pias season the fruits sprout in a congregation, plentifully, around the trunk of the bilimbi tree. We are just starting to enjoy the fruits this year, and I am drooling in anticipation of the dishes it could be added to, besides the sinigang.

We add it to the vegetable mix of saluyot tan labong (bamboo shoots and saluyot leaves), and to puso'y ponti tan saluyot (banana heart and saluyot leaves), as well. The clan on my father's side of the family use pias in bagisen (dinuguan, pork blood stew), while I was taught that Bicolanos use it in laing (taro leaves stewed in coconut cream).

My husband likes the fruit sliced thinly, then mixed with agamang (bagoong alamang, salted fermented krill), to be eaten as an accompaniment to grilled or fried fish. During such times it is not far-fetched to think that I feel like on a picnic, with my hair tossed by the sea breeze.

Your picture of kamias had me reaching for the bottle of bagoong. I miss eating fresh kamias. No fresh kamias where I now live.
My mother used to make kamias "prunes" but there's nothing like biting into a fresh, crunchy, face-contorting, sour kamias.

I see children reaching for kamias on the tree and munching on them, but my sensitive molars can't tolerate them long. I'm salivating at the thought of it.

I have heard of kamias prunes, but i haven't seen them in my part of the boondocks. Perhaps because there's only one tree in the backyard, and the neighbors east-south-north-west of the house treat it as public property, so there's usually no surplus to make into prunes.

Kinilaw na dulong? Now that's one I'd like to see, and eat.

Can you eat the leaves? We have a plant an was wondering if the leaves are edible

No, we don't eat the leaves.

Hello po. Can I ask for the author's surname and first name po so that we can cite him/her in our research paper?