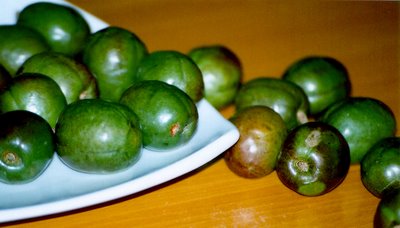 Siriguelas by the kariton-load have been going around residential and commercial areas for weeks now. There must be thousands of the small fruits per overflowing wooden cart, and several carts rove around throughout the day.
Most are ripe (overly so, for me) and sweet even though the skins are still dark green. They are in the relatively smaller variety, which is a good indicator of high concentrations of flavor.
This is one of the few local fruits I know which retain their names or a semblance of it all over the archipelago. Scientifically the term is Spondias dulcis Blanco, but the local names are saguelas/sarguelas (Ilokano), saraguelas (Ibanag), sereguelas (Bisaya), sineguelas/sirihuelas (Tagalog), siriguelas (Bikol/Pangasinan).
All these names in the various Philippine languages can be traced as corruptions of ciruela, the Spanish name for the plum fruit. It was, of course, the Spanish who brought the fruit here from the Americas, and referred to it as ciruela because it looks a lot like a plum.
It tastes like a plum, too, only more astringent and has a lot of sourness (or sweetness, when ripe). The flesh is denser, and the seed bigger. Along with duhat, it is a good kutkutin (finger food to munch on), which Filipinos are very fond of - natural, no-salt, low-fat.
Siriguelas is not planted in my hometown, so we get to eat the fruit only when somebody goes out of town. It is a favorite pasalubong from the pilgrimage town of Manaoag, which produces the biggest and tarty-sweetest siriguelas in the province, sold in small, brown paper bags.
We prefer our siriguelas on the tart side - the sourness overpowering the sweetness, because a too sweet siriguelas tastes a bit cloying. It is exciting to be biting onto the fruit and experiencing tingles in your mouth from the tartness.
It's been said that a partly unripe siriguelas can cause stomach ache, but I've never been down from a sour siriguelas. Maybe because I have been exposed to the fruit since childhood and probably have developed a bit of "immunity" against its trouble-causing compounds.
Posted by Kai at 7:11 PM

oh my!. miss it terribly.

kai, that is one of my fav. fruits...when i was high school we usually by them when season as our meryenda! My pocket money just to spend for a bunch of siniguelas as we call! thanks for sharing the picture!

kai, recently i bought some small plums while on the road -- a farmer's harvest that day that they were selling in stalls off the highway. they were still on the greenish/unripe side and tasted, surprisingly, like siniguelas!!! I say "surprisingly" kasi most unripe plums I've tasted are really sour, unlike siniguelas which to me is "just right". so i told my kids about it, but sad to say, walang appeal sa kanila:(