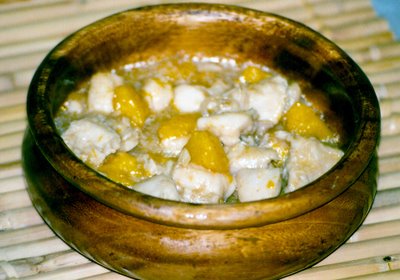 We held our wedding in Baguio City because at that time our hometown parish church was still under construction, having sustained irreparable damage from the powerful earthquake that shook Luzon and leveled down Baguio.
The huge church was demolished and took more than a decade to rebuild, largely due to insufficiency of funds.
It is standing now - it is large enough to rival any cathedral. It would have been grand to have walked down its aisle. And of course, more importantly, its sentimental value is immeasurable - I had attended services in the church from infancy, after all. I was baptized and confirmed there, and it was where my parents got married.
Sometimes I still dream of getting married in that church. My Flynn and I couldn't wait for it to be finished when we were planning our wedding, so we opted for a non-traditional course by holding the ceremony and reception outside the bride's hometown, which happened to be out of the groom's hometown, as well.
The most logical choice was, of course, Baguio City, due to its proximity and wealth of wedding venues. We also had a lot of invitees from abroad and from out of the province - mostly from Metro Manila - and we wanted them to maximize a trip out of town by indulging in other activities on their own. That would be a bit difficult in Pangasinan because leisure spots are far in between, and would need a lot of planning and management on our part.
To at least have a little sentimental connection, I insisted we get married inside the school where Flynn finished college, in a charming little chapel perched on top of a hill with a view of the mountains traversed by Kennon Road.
For our wedding reception we both fell in love at first sight with the clubhouse at Camp John Hay, which had mismatching carved, heavy wooden chairs and tables, huge fireplaces, massive chandeliers, and a gleaming, grand pine staircase, going down on which you get a breathtaking view of the undulating greens surrounding the clubhouse.
Good thing the concessionaire - owned by the Wassmers of the famed Chinese boxed take-out Singkit - offered us a good menu. We scouted for other venues, but either the food was ordinary (mostly Chinese), or it was too far from the ceremony venue.
The closest other option was the Baguio Country Club, but at that time the grand ballroom was not yet constructed, and anyhow, I would not have traded anything in the world for the view around the John Hay clubhouse.
It was a splendid hall in itself - it needed minimal decoration, even for a wedding. All I did was to scatter around mini Japanese paper lanterns and washed out pebbles, and the effect of the shaded fluttering tealights against the burnished pine wood and the greens in the dusk was spectacular.
I chose to dwell on these because, as I'm sure anyone who ever got married could identify with, I remember nothing about the food. Of course we had a selection of menus to choose from, which elicited much thought and much more discussion with my hotelier friends. I did research on wines. We had a tasting menu. We revised our selections after the tasting because we did not think one course fit in and we had to change it.
But I don't remember how the courses tasted. And I don't ever remember how they tasted on the wedding reception itself, and it was not that long ago. I'm not even sure if I or Flynn actually ate during the reception. Maybe a forkful of wedding cake and a sip of champagne, but even that I don't recall.
What I vividly remember was that we were ravenously hungry (for food, just to be clear, hehe) upon reaching our honeymoon suite around midnight. Thank goodness for room service.
~ ~ ~ ~ ~ ~ ~ ~ ~ ~ ~
What I'm posting here today, in commemoration of our wedding anniversary, is a dish that was included in our wedding banquet. It is, at most, eclectic. I've never encountered it before the tasting menu, but the pairing worked.
Apparently, stir-fried chicken and ripe mangoes is a popular tropical dish in the Carribeans, but is not eaten in the Philippines. I can understand a savory dish with green mangoes, but not ripe ones. In Asia, there is a beef dish with mangoes, or a curried chicken and mango, but not a simple chicken and mango as what we had in our reception. Most recipes call for other ingredients, or with cream.
As I do not remember the taste, I don't think I even approximated what we had in the wedding. Probably the closest one would be this recipe.
What I did, though, was to marinate fillets of chicken breast in salt, pepper, oyster sauce and flour for about twenty minutes, Chinese style, then sauteéd the chicken in sesame oil, garlic and onions. I added a little water, and stir-fried the chicken until cooked. Then I added the cubed ripe mangoes and cooked for a minute more.
The result was a combination of tropical and Asian flavors melding together. The sweetness of the mango was foiled by the oyster sauce, with spicy undertones of the sesame oil. All in all the tastes were delicate, teasingly understated and deliciously restrained. Quite refreshing, too.
It is festive enough - which is just as good, for I don't think I could eat this on an ordinary day basis. As I note time and again, I am not used to savory dishes having sweet elements. But this can be a very elegant addition to a spread during special occasions. Like a wedding anniversary, for one. And a wedding banquet, of course.

Email ThisBlogThis!Share to TwitterShare to FacebookShare to Pinterest
Labels: from around the world, poncia (handaan/party), prutas (fruits), sira (ulam/viand)

when i saw the title and the picture i do wonder how it would taste. ur way of describing it convinced me it is really quite special. :)

Oh yeah, Iska, I wonder if there is a dish something like this in China?

hey happy anniversary! missing our philippine mangoes..imagine what we get here! and for a dollar and fifty a piece!

hi kai! mangoes here in beijing are either from southern china, taiwan and thailand. so far, i haven't encountered a dish that is similar to this.

hi kai. i've tasted a dish similar to your recipe in a chinese restaurant, but they served it as a salad--combination of shredded steamed chicken meat, ripe mango and jelly fish, with oyster sauce and sesame oil dressing topped with fried molo wrappers.

so i guess your dish really has some chinese connection.

Jhaw, thanks, wherever can I find that? I'll be on the lookout for Chinese dishes with fruits from now on. I think I missed a lot shunning savory dishes with sweet notes in them - considering I like the hot prawn salad.

I own a website www.decorwoodshop.com Here you can buy the very cheap handmand wood carvings to decorate your room! The price is very cheap!!!

I will try this one. Thanks for sharing, Kai.

Kai,
First of all I would like to congratulate you on your wedding anniversary...
I wonder which chapel you got married.. SLU ??
In pangasinan there are good resorts now. I was there on the last week of May to celebrate the Golden Anniversary of my parents. We have the reception at the Leisure Coast in Bunoan Dagupan. The place was great and there are accomodation with reasonable price. They have also water park for young and adults to enjoy..

For the menu I tasted one here in NJ at one of the Malaysian restaurant and it taste great.

Thanks, Bert. It was in Fort Del Pilar. Good thing you were able to enjoy Leisure Coast - I haven't yet, but would try to find time for it soon. It's been the in place for years now. Hope you enjoyed the best of Pangasinan cuisine, even for only a couple of weeks.

i still remember that grand day of yours. I still have the scars (unrelated to your event but got it during the trip) to remind me. That road trip proved to be the first of many we undertook ever since. i guess the travel bug is contagious.

Hi Kai..anong batch si Flynn? Haha.. 1990 was when the earthquake happened so before that, I used to go to hops..yikes..I think I said too much. I am guessing Flynn is in the "flying division".. ooppss, getting close, getting close..

Anyhow, I tasted this from a French restaurant so I think it has a bit of French influence to it.