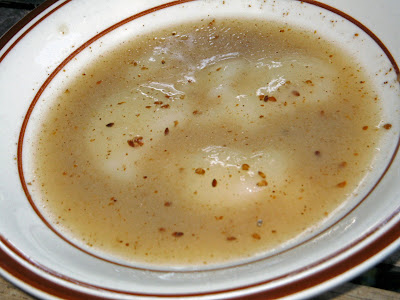 Here is yet another variation of palitaw, that ubiquitous kakanin that is so versatile because it is just rice flour mixed with water - it is so bland that it lends well to any and any other topping. Or sauce, as what I seem to be used to. I wrote about unda-unday previously, which is how palitaw is eaten in my family - with a thick sauce of dissolved sugar and coconut strips.

The most common palitaw is the dry version topped with a combination of grated coconut meat, toasted sesame seeds and white sugar. As for masikoy - I never knew about it, that is, until I married and became immersed in my in-laws' food traditions.

As it turns out, masikoy is a perennial feature in handaans (parties) hosted by the many families in my husband's clan. It is an indispensable handa in any padasal - a novena prayer session held usually for the souls of the beloved departed, in remembrance of their birthdays or death anniversaries, and led commonly by the eldest in the community. My husband's family also cook masikoy during All Saints' Day/All Souls' Day, because they also hold padasal during this time and because it is harvest time - a premium time to eat new ansak-ket (malagkit, glutinous rice).

I like attending padasals, because these days it is one of the only two occasions when I can get to hear novena prayers in the Pangasinan language sung in keening fashion, called cantores, which also refers to the singers. The other occasion is during Three Kings, when cantores go from house to house singing about the birth of Jesus Christ during the wee hours of the morning, when I am usually so deep in REM that I can never get the motivation to wake up.

So a padasal is the most accessible, and the more common, event to get to hear cantores singing. A padasal is also always accompanied by a handa to refresh, and as a grateful gesture to, those who led the prayers and the others who joined the prayer session. As the ritual goes deep into our Filipino Catholic religious heritage, the food also represents deep cultural roots.

The handa will always have a kanen (kakanin, sweet treats made from rice). As the padasal remembers the dead, the handa features that which sustains the living.

It is almost sacrilege to serve any unknown dish (i.e., foreign-inspired, fusion, et.al.) during this occasion. There may be pancit, yes, but pancit has been so indigenized, and has featured in our cuisine for so long that it is considered a local dish. The drinks would invariably be softdrinks, because it is the most common, although if the host family is a bit up the economic stratum tsokolate is preferred.

Masikoy, or palitaw, is the embodiment of rural cuisine. Made from rice - the staple food - and adorned with coconuts, sesame seeds, sugar - all can be sourced from the backyard garden - it is absolutely home-made, the making usually a community effort, and cooked using ingredients that abound in the locale.

Masikoy tastes like regular (dry) palitaw, because the two variants basically have the same ingredients. The only difference is that eating masikoy is like eating ginataang bilo-bilo, with only the flat bilo-bilo as ingredient and with the flavors of dry palitaw, though the taste of toasted sesame is more pronounced. 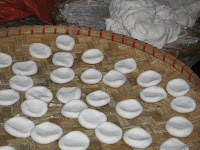 **Alternatively, commercially available powdered rice flour can be used. Make sure you use glutinous rice flour and not ordinary rice flour. Mix in a little water to make rice dough, and proceed to step 2.

Hi! I have been reading your blog for sometime now. I am from Dagupan City, but I work in Mandaluyong. Even though I go home twice a month, I still miss the food back home. I try to cook Pangasinense dish here in Metro Manila, and my housemates and colleagues at work find our vegetable dishes really good. I also brought masikoy and deremen, and they loved them.
Thank you for promoting Pangasinense dishes. Pangasinense dishes are not as heavily promoted as those from other provinces or regions. It's so good that we have bloggers like you who are trying to introduce the culinary treasures of our pinablin luyag a Pangasinan. :)

And yes, we have treasures to share. Masikoy, deremen, kiniler, puto Calasiao, mangga na San Carlos, and the beautiful and brilliant people of the province or of the Pangasinan heritage (F Sionil Jose, FVR, Gloria Romero, FPJ, GMA, Chief Justice Moran, the Orboses, Carlos P Romulo (from Camiling, which used to be part of Pangasinan and they were and are a Pangasinan family), the Bengzons, to name a few).