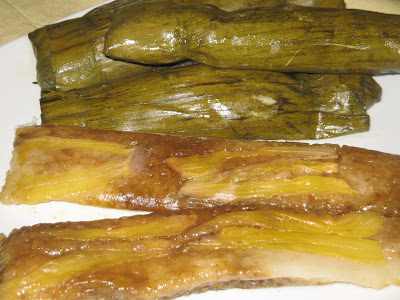 [The Colors of Christmas]
Christmas can be one very big excuse for decadence, for indulging in your wildest imagination and actually translating it into reality. So cakes, salads, kakanin and all kinds of desserts are the order of the day, and several kinds on the table is not actually frowned upon, for once in my family, during this season.

The bacchanalia is not even limited to Christmas Eve, extending to Christmas Day itself. The season officially starts with the onset of Advent, as practiced in the Roman Catholic Church, right on the first Sunday after the feast of Christ the King.

It usually falls on the first Sunday of December, with the buzz increasing daily until it attains deafening proportion nine days before Christmas - when the Misa de Gallo starts.

Christmas Eve and Christmas Day feasts are big buffet spreads, encompassing all courses imaginable, with several kinds of each. Misa de Gallo treats are a different matter, though. For one, eating after each dawn mass is not considered a party. And second, you can only eat so much so early in the morning.

And so Misa de Gallo treats are light, pre-breakfast fare, usually finger food cooked right in front of the church or along the streets leading to or coming from it. Breakfast, perhaps heavy, celebratory ones, is reserved for later, when the sun has warmed the air, maybe after a short nap that brings on renewed energy for sitting down on the table.

Eating right after Misa de Gallo, just outside the church, while walking home, or inside the house while tea or coffe is brewing, is communion after mass. Communion with your companions, who may play a major part in your success in completing all the nine days. Also communion with the local culture, because Misa de Gallo treats usually adhere to tradition.

They may be as nondescript as pandesal peddled on horn-tooting bikes, still hot from the ovens, filled with margarine and sugar, or liver spread, or pastillas, or katiba (coco jam). Or as opulent as ensaymada warmed with butter. Or as rooted to the locale as bibingka, or puto bumbong, or intemtem (commonly known by the Ilocano term tupig). And any suman variant, a product of community effort and the focus of community partaking. These are traditionally downed with either tsokolate or salabat (hot ginger drink), to warm the throats and fight the cold. 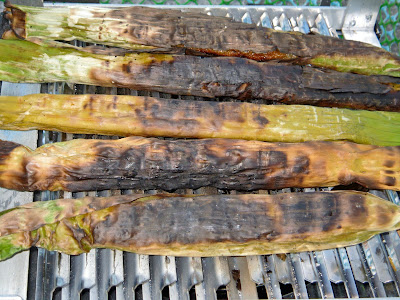 Intemtem, or tupig in Ilocano, is the ultimate Misa de Gallo treat in Pangasinan. It is more popular than our version of the bibingka, which is in mini sizes and made of rice. Of course it is available year-round, after Sunday masses, but there's nothing like the smell of grilled banana leaves mixing in with the cold dawn air after Misa de Gallo. And the experience of unrolling the wrap and biting into the still hot treat redolent with buco strips while walking home in the silent streets, the world still to wake, and the prospect of burrowing back under the covers after eating, is just unforgettable. 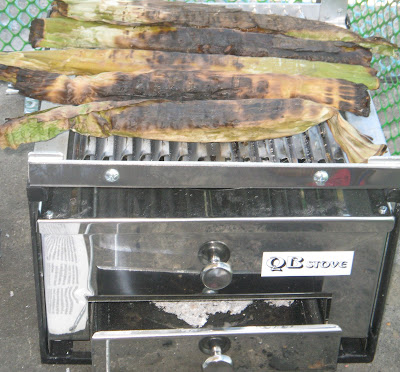 Living away from the province is no excuse for me to miss that experience again. So I relived cooking and eating intemtem right in Cavite, using the economical QB Stove charcoal grill (no way was I going to cook intemtem over an electric grill).

Lasang Pinoy 22 for December, with the theme Rice to the Challenge is hosted by JMom over at Cooked from the Heart.
Posted by Kai at 5:55 PM

Is "Intemtem" and "Tupig" one and the same? Whenever my parents would go to the Pangasinan and Nueva Ecija they would always bring home "Tupigs" and they're really good when still warm.

its my 1st time to visit your blog in months. i'm surprised by the new look and the volume of articles you've written. i happen to be looking for some recipes after failing to inform our cook in the seminary to prepare meals for 3 days that she will be out during the holidays. yeah, the task falls on my lap. its daunting as i'd be cooking for a french man, a colombian and an american with varying preferences and gastronomic quirks.

btw, you've got a yummy looking suman! i could almost taste it.

Copperfish, intemtem is the Pangasinan term for tupig, which is Ilocano. Yes, they're great to eat warm.

Yo, nice to hear from you, hope you had a grand time cooking for multinationals!

My sister was just commenting how much she missed tupig. Now I'll know how to make it! Thanks for sharing the recipe, Kai. Your contributions to LP are priceless! I am printing this out to try.

Too bad your the puto recipe is in the vault. I read your comment on Stef's puto experiment. :)

btw, I think in La Union they also call intemtem ibus? is that right?

JMom, sorry, tupig and and intemtem are the only terms I know for this grilled delicacy. Though the term ibus would be about logical referring to tupig.

I've never had langka suman before!! This is a definite must-try! Have you had Quezon's sumang saba?

Mang Mike, I just tried to copy the flavored suman that's the fad in Metro Manila these days.

Stef, never heard about sumang saba. The flavored (filled) suman being vended around Metro Manila have banana filling using saba, but I'm sure that's not what you're referring to.