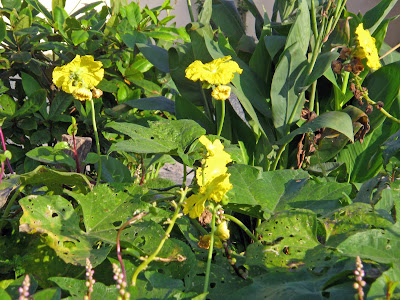 The community in which we live has been ablaze with lights since December 14, when there was a lighting ceremony with the padres de familias along with their spouses, that had been preceded by the kids' Christmas party.

The decor is a sight to behold, very festive with a myriad of lights and a huge star shining down atop a tower. But lights are only good in the evenings, the enjoyment lasting only a few hours.

During the daytime, though, the entire place is alight with a different kind of decoration - golden, ethereal, not as brazen as the blaze of light at night, but as profuse, and the impact is the same, or even more forceful.

For at first sunlight the whole neighborhood is already afire with yellow blooms that had started sprouting merely a week before the lighting ceremony. Every backyard, frontyard, sidewalk and lower areas of every building, and virtually any patch of soil in between, is covered with leafy vines on which golden floral bells reign, tolling the countdown to Christmas.

It is my first time to see patola (sponge gourd) flowers on the plant, and it seems a blessing to witness them in full, profuse bloom. At first I thought they were bulaklak ng kalabasa (squash flowers), and I had asked the househelp one morning to pick some at the nearest crawling tendril for that day's lunch.

Well it turns out patola blooms are not edible, so the flowers were allowed to bloom, greeting attendees to the Misa De Gallo each dawn up to Christmas, and providing constant, live golden fireworks the whole of New Year's day. 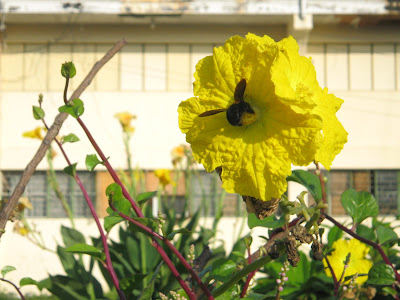 I'm sure the backyard trellises sporting the yellowbell lookalikes had been intentionally planted, but I doubt the same elsewhere. Even pavement cracks are sprouting flowers. It's such a wonder how nature, when the right season has come, lets nothing stop it when it decides upon abundance.

The greater wonder is that the first fruits arrived in time for Epiphany. It's as if it is telling us, wishing us, that all the festivities, perhaps even the frivolities, should now be bearing fruit - a more generous spirit all year-round, with radiant light emanating from within from a shiny new heart brimming full of love, charity and hope.

I have never been a fan of patola. Actually, I abhorred - I cannot use the term now, but I still can't bring myself to eat - the vegetable. As a child, having naturally over-sensitive senses of smell and taste, the subtly flavored and scented vegetables eggplant and sponge gourd had such strong, undesirable aromas for me that I couldn't tolerate them in proximity. I don't know why I picked on these two, there are certainly other vegetables that are stronger smelling. Perhaps it was due to the green, or greener, smell.

My mommy was clueless, stating that the vegetables I was picking on were actually tasteless and scentless. I eat eggplants now, and I know that they have a certain subtle flavor and aroma. As for patola, I can get near it only when it is already in loofah form. Its smell, and taste, is really distinctive, even now for me, and I have long decided that I'm missing nothing avoiding anything cooked with it.

I don't take pains staying away from it, anyhow. Patola never featured much in my childhood food landscape - it was never used commonly. I know it is added to misua, but I grew up on patola-less misua. It is also added to some versions of bulanglang, but the oldies, including the in-laws, never cry when patola is absent in the repertoire, so my food peculiarities have never been highlighted. Well at least in the patola division.

My food biases nevertheless, wishing everybody the spirit of Epiphany - wealth and richness in heart and spirit.
Posted by Kai at 10:53 AM

Happy New year to you and your family!
Is it really true that patola blooms are not edible. Coz if I remember it right, years ago, when I go home during sem break , I see my mom gathering patola tops and blooms for lunch, sahog sa bulanglang maybe but I haven't try eating it. Do you know if they have ill-effects or are poisonous?
thanks...

Hi, Jane, I don't think the blooms are inedible per se, but I don't know anyone else who eats them. Don't fret - the leaves have medicinal properties and are used for home cures, so the possibility of the plant being poisonous is far out.

Happy New Year to you and your loved ones, as well!