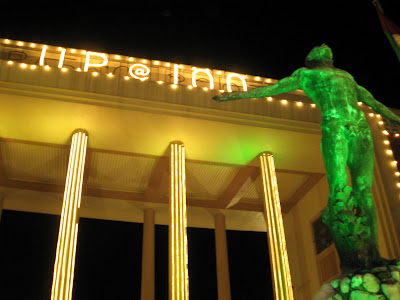 [Centennial Lights and The Oblation]

The University of the Philippines kicked off its year-long centennial celebrations on January 8, 2008 at the Diliman campus, with a series of symbolism-packed events. The landing of skydivers, sounding of tambuli, a 100-man torch relay passing the centennial flame and lighting of the centennial cauldron, a 100-gun salute and tolling of the Carillon bells, the emotional assembly singing of UP Naming Mahal, a concert showcasing UP's famous talents, and fireworks display - all were held around the academic oval and in front of the administrative building - never far from UP's symbol The Oblation, which stands for the unending search for freedom and truth in knowledge. 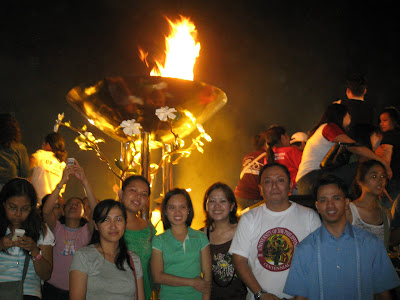 Of course, as much as the trip back with friends to the campus were for sentimental and celebratory reasons, part of these reasons is the chance to once again partake of student food. I'm sure nobody ever goes back to eat dormitory food again in Kalayaan, or Molave, or Ilang-Ilang, but campus food means the whole gamut of streetfood to SC offerings to fresh, home-baked breads to the new, classy restaurants that survived the years.

The night meant a late dinner for revelers, as all the celebratory events ended at about 10PM. I had the sense to heed the call of a bike's horn behind me as the torch-bearers' names were announced (distinguished alumni, university officials, the topnotcher of the UP IS elementary graduating class, and a 100-year old alumnus). Monay being vended on a bike by a manong along the University Avenue was not surprising - what surprised me was that he had pre-packed single slices of cheese, and individual servings of peanut butter in small cups with a small spoon to go with the warm bread.

That was a blessing that sustained me and my companions through the cool evening, since all campus eateries were packed and service was at a crawl. This meant most celebrators opted to eat inside the campus, even though it meant walking blocks and blocks to get to the area where most food joints were located, since parking was restricted to the backstreets, and the academic oval was of course closed to traffic.

Our first choice was The Chocolate Kiss, it being the nearest at the Alumni Hall, but it was logically SRO. Chateau Verde was having problems serving all of its customers, so we ended up at Khas Food House. 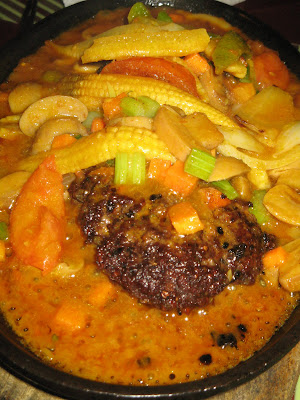 Khas, which used to be called Cititop, but which we've been calling Pakistani ever since it opened (in our generalization mode, and because in my time there were a lot of Pakistani students - again, they were not really all from Pakistan, but we tended to lump them all together). It should not have been our last choice (we decided early on that Rodic's would be impossible, given its few tables), considering the service and specialties, but we wanted a more "classy" ambience and experience, given that a centennial is a cause for grand celebration.

But Khas was actually perfect for the event. Besides the usual prompt service and the consistently good food, the exotic rich taste of its cuisine represents the path towards which UP intends to go for the next hundred years.

We had Sizzling Kebabs - two thick beef patties piled with crunchy vegetables and drizzled with spice-rich sauce, served bubbling that the sizzling was so loud on the hot plate, leaving a comet's trail of smoke all through the eatery. 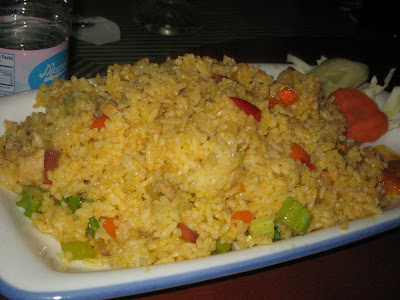 The kebabs went perfectly well with Jambalaya, which was so flavorful that it was good on its own. We were so hungry, and the pair was so good that we ordered seconds. The second order of kebab was declared the last order of the dish for the night because, unlike the other dishes, it takes a long time to cook, and by that time it was nearing midnight (Khas closes at 12MN). 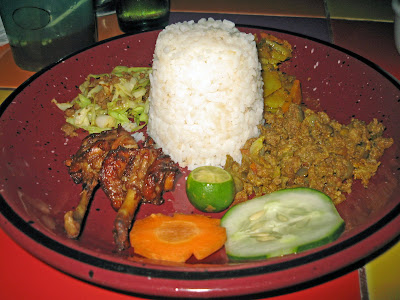 Khas has been feeding UP denizens for about 14 years now. I was introduced to it by a Muslim classmate when I was doing graduate studies at the university. It occupied the "garden" inside the UP Arcade, beside the swimming pool, and it filled up the gap left by the closed cafe once operated by the now defunct UP Food Service.

That it is patronized by Muslims is logical - the food is described as Persian (mostly), almost every dish has a vegetarian equivalent, and everything is halal. Filipino and foreigner Muslims patronize the eatery, but other diners regardless of religious or ethno-linguistic affiliations also occupy about half of the tables.

The eatery was open air, the floor mud-packed, the kitchen was separated from the main dining area by a low wooden wall, which was tacked with white cartolinas covered in plastic, on which the menu was written.

This menu never changed - but now there are laminated menus on folders with photos of the dishes and brief descriptions of each. When I first ate there my classmate recommended either the Chicken Garlic(or beef, squid or all-vegetable) or Chicken Topping (again, it could be beef, squid or all-vegetable), the two bestsellers. They also contain the least spices, so they are the perfect introduction to Khas' cuisine.

For years I could not pull myself away from these two. Chicken Garlic was sauteed with garlic, cabbage and spices, while the topping had chopped Baguio beans (long green beans) and spices. They tasted like nothing else in any restaurant I went to or what I could cook at home. But a big part of the reason I could not veer away from them is the fact that the rest of the menu was unfamiliar territory - I didn't have the guts to try Hajj Burning Lips or That's Not What You Think, or the popular Keema, by myself.

But I couldn't contain the addiction to myself. Gradually I introduced several circles of friends to Khas, and after their first heady taste of Topping and Garlic we became more adventurous and tried other dishes. It helped that the waitresses are more than willing to describe, though not amply, each dish.

The safest way to venture to the other dishes is to order the Cititop fiesta, which is a sampler of four dishes - Beef Garlic, Keema, curried vegetables and chicken lollipops (bland). After experiencing the rich spices and realizing that they are tolerable, you are ready for the others.

But the next best thing to Garlic and Topping is the Safari (beef, chicken, squid, vegetable), which is basically Garlic ingredients folded in scrambled eggs. If you happen to be ravenous (like me most of the time when I get to Khas late in the morning, when I intentionally eat no breakfast so I could sample more dishes), try the Double Decker, which is Safari that is twice the serving size. 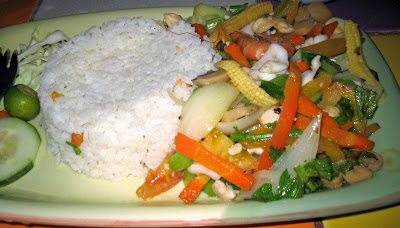 But lately I've discovered that the Bradi platter doesn't contain any spice, but is enriched with the flavors of its ingredients that are half-cooked so that every bite is a crunchful - chicken, squid and shrimp with slices of bell pepers, young corn, mushrooms, carrots, tomatoes, onions and celery, simply sauteed. 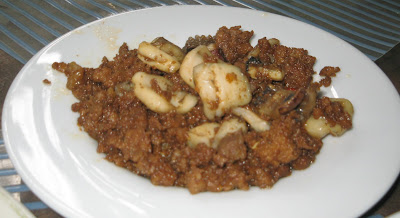 The popular Keema is ground beef simmered until dry with tomato sauce, ginger and spices. It can be ordered with squid or chicken slices, and it is best eaten with steamed plain rice.

The beef dishes at Khas use ground beef, always cooked well-done. This may be one of the eatery's strategies of keeping the prices of beef dishes down, but I think that it is also the best way for the meat to absorb all those spices that it always comes out so full of flavor.

The dishes have remained practically the same - in taste, serving amount and price, over more than a decade, but the place has evolved, albeit gradually. There is now a sort of canopy so diners could enjoy the food even during the rainy season. It's funny, though, that an aluminum water gutter now runs along the ceiling, and small fruits from the trees which rise way above the canopy produce small explosions like sporadic high-powered gunfire when falling. Perhaps in keeping with the Arabian ambience?

The floor and tabletops have also been tiled, in bright colors, and some wind chimes and water fountains counter the din in the kitchen. The expansion that can be accommodated is a couple of tables toward the entrance, but the service is always prompt, dishes take only a minute to cook, so table turnover is quick. 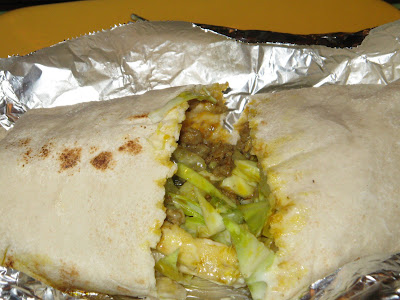 The equivalent of the hugely popular shawarma is Zetheska, pita-wrapped beef, cabbage, cucumber and onion slices with mayonnaise and a hot sauce. 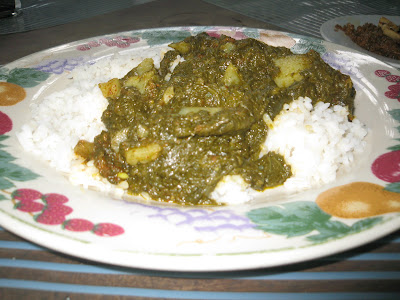 * between the Church of the Holy Sacrifice and Ilang-Ilang Residence Hall, on the vacant lot at the back of the College of Law

It was great, just a little overdone, but still great