Not a lot of chocolate gifts in 2007 for me and the family, comparatively speaking, in kind and the quantity of sources. Throughout the year the chiller never ran out of chocolate bars, but they were of the common, "ordinary" kind, the kind brought by balikbayan friends and relatives which are available in any local 7-11 or grocery store regardless of size or extent of imported goods it carries.

The only markedly different ones I got were the Nestle bars under the Cailler line from Switzerland, bought at the DFA Bazaar.

And then an aunt came from New York, and my chocolate dreams became livelier. 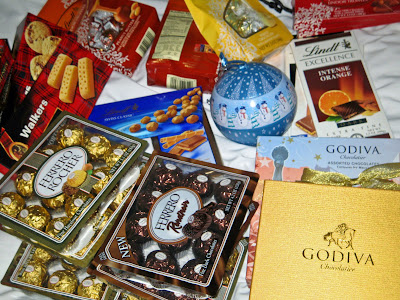 [Godiva, Lindt, Ferrero chocolates from NY, US-made shortbread and butter cookies]
The brands are commonly familiar - exceptly for Godiva. I had the sense to warn the aunt that all these brands are available here, and fortunately she chose the flavors not found in the country. I may be wrong - I don't peruse the chocolate sections of supermarkets that much since I never buy, but I have passed by them a great number of times and I can safely say that I've never seen these before.

The Lindt bars came in peanut butter, intense orange and creme brulee flavors, and there was a holiday ball full of truffle squares that delighted the kids. There was also a Ferrero Rondnoir - dark chocolate Rochers. I have never been a huge fan of Rochers, even though it is full of hazelnut goodness in various heavenly forms, but this variant created a convert in me. Now where do I get more when the family finishes the pack? 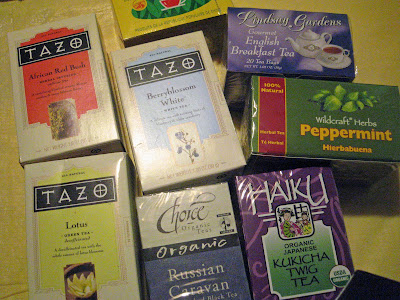 The same source also enlivened my tea cupboard, providing more than enough cheer for a whole year due to the variety of teas she brought. This aunt is a frequent traveler, and I would always ask her to buy me teas wherever she goes. She reports she sees the teas I want, but refrains from buying them for me because there is no guaranteeing when she'll be coming here (not a regular balikbayan - the last time she was here was when she attended my wedding).

But this time she made up for it, going overboard with her tea shopping. Of course nothing too exotic - everything came from her grocery store in New York - as this trip was largely unplanned. But the variety suits me very well - at least, even if some of the brands are locally available, the flavors are hard to find, and some are my first encounter of their kind.

First off are the Tazo teas, the brand carried by Starbucks, but I don't believe anyone could order these in any local outlet. The African rooibos (red bush) tea is a special request, but I'm lucky the aunt included two more organic, naturally-caffeine free flavors - lotus and berryblossom white. All three are anti-oxidant rich, with the white tea naturally containing the most antioxidants. It is flavored with a blend of blueberry and white cranberry.

Lotus is a green tea with the subtle essence of lotus blossoms. I've eaten lotus roots in Japan, and stuffed myself with white lotus cream mooncakes from the Far Eastern Cafe in Binondo, but I'm not really familiar with the taste of lotus blossoms. This one is subtle indeed, fragrant and a bit tangy.

The Russian Caravan is a pine-smoked black tea that evokes the flavors highly-sought by the 19th century Russian Czars. These teas of old journeyed from China to Russia in camel caravans, their flavor heightened by the smoke of nightly fires during the long passage. The Russian Caravan is a blend of rich Yunnan with the distinctly smoky Lapsang Souchong teas.

The gem among the whole lot is easily the Haiku organic kukicha or Japanese twig tea. Kukicha was a peasant's drink in Japan, drunk by the tea tree growers after selling the more valuable leaves for tea. It consists of 40% medium twigs that are 3 years old, 40% thick twigs which have been growing for 10 years, and 20% thin twigs and leaves about a year old.

This is a very mild tea that can be drunk even at night, because caffeine is mainly found in the leaves, and so twig tea has the lowest caffeine content among all traditional teas. But whether it was just due to economic reasons that the Japanese peasants of old drank concoctions made from the twigs of the tea tree, or whether they knew about its health properties, kukicha is among the preferred drinks of the macrobiotic diet - essentially eating all things natural for health and well-being.

Kukicha is reported to be a nutty and creamy tea, but I cannot confirm this as yet. I'll be able to taste it only after about two months or so - I'm avoiding it now as it has been proven to be effective in inducing labor.

For now, I'm content with reflecting on the haiku, by my favorite Basho, that accompanied the kukicha -

Deep in the summer shade, when leaves are muteI heard the Sunma Temple's unblown flute.

the lindt is the only chocolate I eat.

I enjoy kukicha tea as well. I purchase it loose to get that sweet, creamy taste that kukicha is known for. Green tea is known for many health benefits and so is dark chocolate. Both have lots of antioxidants that our bodies need to stay healthy, so you have a great holiday stash.

Yes, isn't it great? My aunt purchased all these cluelessly - I mean she's not into eating healthy or being conscious of it, anyway, but her choices worked best for me!

I haven't ventured into regularly drinking loose leaf tea yet - I'm not that yet a sophisticated tea drinker, though I've had them as gifts and drunk them in restaurants, and in Japan, of course, and I have some equipment. It will be a good project to embark on soon - I hope I can find good suppliers locally.

i wanna have those dark Ferrero!!! :D