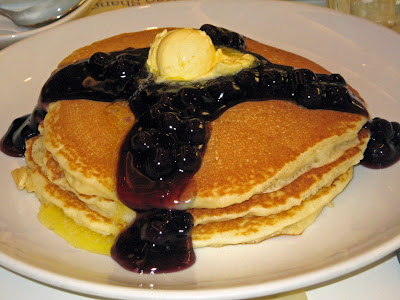 One of my dining groups had to meet somebody at the Greenbelt neighborhood one lunchtime on a weekday. It was unplanned, and as it was well within office hours the time was constrained. We weren't feeling inspired as to our restaurant choices, having heard nothing new that attracted our noses.

So we decided to just proceed to Cyma Estiatorio at Greenbelt 2, where we were sure to have a reliably satisfying meal based on previous visits, but found it closed for renovation. The lunch hour was fast ending by then, and we had work to go back to, so we chose the nearest restaurant we laid eyes on. It so happened that Flapjacks, then newly-opened, was beside Cyma, so it was the natural choice.

But I must say Flapjacks' existence at Greenbelt 2 is unnatural, to say the least. It is nothing more than a flimsy diner, with nothing spectacular to offer. I thought it could be an alternative to the venerable Pancake House, but our lunch there was such a disappointment that I am never going back.

First off, almost all of the dishes we ordered seemed to have come from a can, which were just plated, heated in a microwave oven and served. We had a three-piece stack of flapjacks in double blueberry (Php245), a grilled chicken fajita omelette (Php275), tuna casserole (Php295), and chicken noodle soup (Php155), beef stew (Php295), and a house salad (Php245).

Looking back now it galls me to think we paid about Php1,700, inclusive of service charge, or roughly Php425 per person, for canned goods. That tuna casserole, particularly, was unbelievable - it was just a can of tuna chunks topped with cream and a slice of Monterey Jack. For its price I could have bought two loaves of good bread, a bottle of dressing, a bunch of basil leaves and some chopped pickles, and four cans of solid tuna, not just chunks, and I could have fed eight people great, filling sandwiches.

The omelette was shabby, the beef stew so-so, and the house salad stingy. Looked and tasted like only the flapjacks were made from scratch and cooked in the premises. But that does not in any way justify eating at Flapjacks, because the pancakes were tasteless I could swear they were made of just flour and water. We ordered the double blueberry, which should have been blueberries folded in the pancakes and blueberry topping. We were served plain pancakes with only bueberry topping.

And that blueberry topping was another matter. It was bland, too. It tasted neither of blueberry nor of syrup. It tasted...nothing. I'd prefer my own pancakes at home, made from a mix in a packet. Anytime. 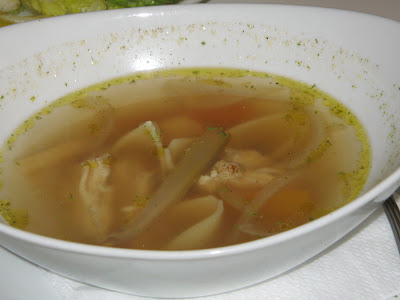 This is half of the chicken noodle soup, and it looked like it came from a can in a brand I would not come near to. My children's nanny can make a better chicken soup, eyes closed.

The other two bowls never came, and we were not inclined to remind the server because after we've tasted the soup we felt we couldn't even finish the one order we had because it was so bland. But the server insisted we were served two orders, pointing out that there were two soup bowls on our table.

She was young, and I couldn't believe she was suffering from memory gap. The least she could have done was to check with the kitchen. Which she did when we were beginning to raise our voices. She came back to our table with the corrected bill, but not a single word of apology.

That's the kind of service offered at Flapjacks. What's more, the servers, all of them, were always hovering near our table, waiting to snatch a plate as soon as it was half-empty (which is still half-full to me), that I had concluded they must have very few plates to serve customers that they should be washed as soon as possible.

I can't recall how many times I had to wrestle a half-full plate from the grip of a server, or hold on to a plate of food to keep it on the table, or even to stuff myself hurriedly with its contents so that it would be empty when the server brandished it away. The restaurant wasn't even half-filled during our meal there. I dread to think how many plates it had.

The owners should have invested on plates when they decided to open a restaurant. Or maybe the servers had broken all but a few of them so this was their modus operandi.

i love the pancakes here, a bit pricey though