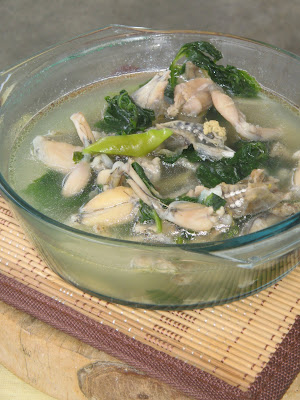 [Sauteed frogs with ampalaya leaves]
We're officially now in the peak of the rainy season, and I'm imagining the ricefields in my province lush with thick, green rice stalks waving in the wind. The waterways are overflowing and pregnant with life. And the air smells of moist earth and young growth.

I delight in thinking that boys of all ages will be standing by the roadside or along the banks of creeks and ponds, sacks at their feet and poles on their hands, waiting for a tug at the worms attached to the end of the thin, plastic cords hanging half-submerged in muddy water.

Just half a day would yield a sackful of, not fish, but live, slimy frogs, eyes bulging and ready to jump away. These boys would also take care of the skinning and dressing, and probably down to the cooking for dinner of these creatures of the earth that wake when the soil is logged enough with rain.

If there is more than enough, the skinned frogs would be skewered on thin bamboo sticks and brought to the public market to be sold to those who do not have the skills for catching frogs.

My father once taught me that to look for frogs you have to turn over stones and logs and big rocks and tempt them with baited worms. We did not have ponds and creeks and ricefields where my paternal grandparents' house was located, and we usually sourced our frogs from the market. The scene of boys along the roads catching frogs is only a recent memory from trips to my husband's family home.

Which goes to say we still have frogs, but not as many as during the previous generation's time, when pesticides were not sprayed on the fields and so allowed the continuous existence of the creatures of the soil. And they are now expensive when bought, the price more than, say, bangus (milkfish), or galunggong (round scad).

I heard that in the past, plenty of frogs could be caught in the fields when the rice has been planted, when the water was knee-deep. Dakomo (mud crabs), too, and bisukol (snails), and dalag (mud fish), gourami, and even the native tilapia and pantat (catfish). 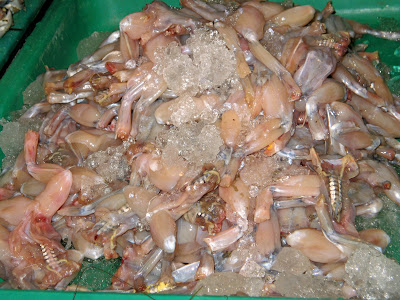 I saw these dressed frogs, heaped with cracked ice, at the seafood market and palutuan by the Boardwalk at the back of Mall of Asia, and bought half a kilo (Php150, US$3), with the thought of being one with those in Pangasinan, offering a toast with a bowl of sauteed frogs in ampalaya leaves.

When I was a child, frogs were cooked in our house adobo style (stewed with soy sauce, vinegar, garlic and peppercorns), fried, or sauteed with tomatoes. Then my children's nannies told me the most common way of cooking frogs in the barrios is sauteed with ampalaya leaves, and I wanted to try it.

I thought the frogs will just be sauteed, and the resulting dish is dry. It turns out the dish is in soup form. The frogs were sauteed with ginger, garlic and onions, and the young leaves of ampalaya and sili haba (mild jalapeno peppers). Water is added and allowed to boil until the frog meat was tender.

I was a bit taken aback. Frogs are exotic enough, even if they belonged to my childhood foodscape. Eating them in broth was a bit too much. But I couldn't back out, and the last time I had eaten frogs was three years ago.

The soup had bitter notes from the ampalaya leaves and a bit of heat from the peppers, but otherwise tasteless. I could understand the use of these ingredients - to cut the lansa (fishy taste) of the frogs. The frog meat was hearty enough for me, but the nannies are frog connoisseurs, and they found them bland. I said it was probably due to the fact that we put the frogs in the freezer for a few days before cooking them.

I know for a fact that anything native loses flavor from freezing. That's why native chicken is cooked right after slaughtering it. And why the frogs were sold cooled with ice, not frozen.

But the nannies said the frogs were bigger than what they usually had from the fields and canals in Pangasinan, so maybe they were of the cultured kind, or were of another variety. So we concluded this kind would be more suited to the dry adobo kind, or to frying. I have to buy again. But I hope we get to go home soon.

as kids, frog legs were a favorite treat... until now, it's is... but we usually have it fried with lots of garlic, salt and pepper... :)

The last time I had fried frog legs was several years ago. They were caught in the creek behind my aunt and uncles house in California. I have never liked nor the leaves that you cooked them with. My uncle just loved them. I have only ever seen them fried. I really enjoy your blog as I keep trying to see if there is anything I remember from my childhood. There are some. Mrs. L Mom.

Aha! now I know were the original Kemit and his relatives met their demise. Kemit's friends with agat tan bulong na sili will be fine dining too.

Frying frog legs is the most common way of cooking them, especially for those who have issues about eating the reptile. With lots of garlic, salt and pepper, yes, spiced well.

Mrs. L's Mom, I didn't know they ate frogs in CA. But then again, I know there are lots of Asian communities there.

With ampalaya leaves it was too much for me, but with bulong na sili? My gosh, that's really like tinola now, I'm not sure I'd have the courage to try that! ;-) Just kidding, thanks for the tip, I'll cook tinola'n patang next time I come across some good ones.

Kai, I meant to get back to you on this. They eat frog legs all over the US, not just California and not just Asians. It is considered a delicacy by a lot of people. My uncle was from Texas. Roz