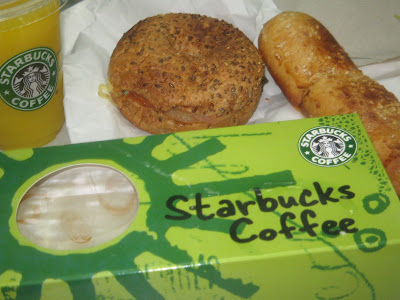 It impressed me that the sandwiches carried by Starbucks in the United States have a loyal following. There was news a few months ago that the sandwiches were going to be pulled out, because their aroma gets in the way of a proper, unadulterated coffee smell that management wants pervading SB outlets. A reversal of the decision was welcomed by customers, including my blogging by mail benefactor, Mrs. L of Pages, Puck & Pantry.

I guess the sandwiches are made on Starbucks premises, to be considered destructive to the coffee smell. It was serendipitous that I was munching on an SB breakfast sandwich - my very first, a hungarian sausage and egg on ciabatta, and surprisingly a good one - when I read Mrs. L's reaction to the update that SB sandwiches were going to stay.

It made me take a second look at the sandwiches carried by Starbucks outlets here in the Philippines. I've had most of their pastries and cakes, and I've unhappily run out of anything good to eat there. So I welcomed the idea of exploring the sandwiches, promising to document them, as a sort of McDonalds index since SB is everywhere around the world, albeit of a higher end sort.

Starbucks Philippines does not its make its own sandwiches, though, nor any other food items it carries, aside from the beverages. The sandwiches, pastries and cakes - appearing uniformly across the country - are outsourced to several local suppliers, and just warmed (except the cakes) upon order. So no news here whatsoever about discontinuing the serving of any food, just the slowing down of the opening of new outlets. 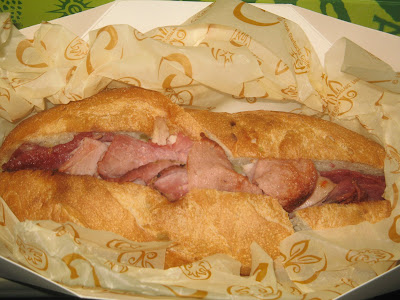 This was the sandwich in that green box in top photo, along with a chicken (in teriyaki flavor) sesame roll (Php70, about US$1.50) on the right.

The following are photos of some breakfast sandwiches I like. 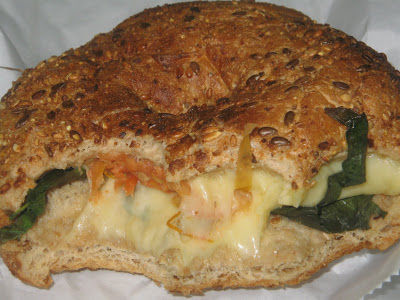 Multigrain bagel with tomato, basil and mozzarella
(Php90, about US$1.90) 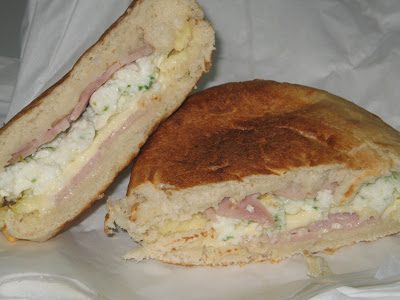 Plain bagels (Php35 each, US$0.75) are also available, with optional cream cheese. There are two kinds of wraps - curried chicken and mango slices on tortilla, and egg, cheese and tomato in a multi-grain tortilla (Php90 each). The chicken mango wrap and the chicken sesame roll represent the Asian connection. 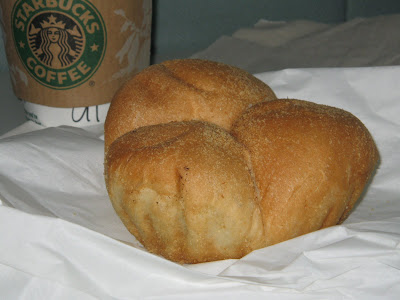 Adobo rolls (also in the asado variant - sweetened pork) and empanadas in the Philippines are not actually eaten at breakfast, but are snack items. Empanadas are small, about the size of half a small cookie, and are usually fried. The common filling is ground pork sauteed in soy sauce, diced potatoes and raisins. 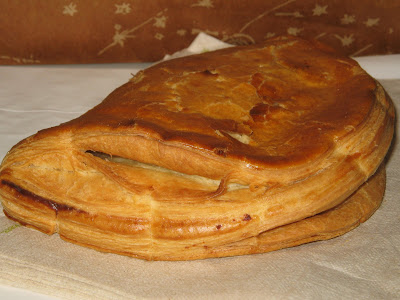 Only the pandesal features prominently in Filipino breakfasts. I say, it is actually the quintessential Filipino breakfast, baked and sold and eaten from dawn from one end of the country to another, transcending ethno-linguistic, cultural and territorial borders. It is eaten dunked in the hot beverage of choice, or spread with mayonnaise, condensed milk, jams, preserves, butter and cheese, or filled with pastillas, fried meat cuts, ground meat, omelettes, hotdogs, stir-fried noodles (pancit), liver spread, sardines.

It is small, about three inches long and an inch and a half wide, so about five pieces for breakfast is normal. A piece on average costs Php2 (about 4 US cents), and is used as one of the indicators of the country's economic index. At Starbucks the pandesal is big, equivalent to about two to three pieces, and filled with chicken, tuna and corned beef.

I love starbucks sandwiches!! my fave is the multigrain bagel w/ egg, mozzarella and bacon :) so filling, i can eat it for lunch! I also like the cinnamon roll (sooo good!!) and belgian waffle w/ caramel..

i have yet to try their muffins :)

Oh yes, I love the cinnamon roll with the lemon buttercream topping, too! I've tried the sugar-free muffins, and I'd advise you not to bother - they're so dry you'd need to drink tons of coffee to swallow it. Don't know about the regular (not sugar-free) kinds, though.

i recently tried their tomato-basil-mozzarella bagel too and its so good rin :D

I never try to taste those kind of sandwiches.I will try to buy someday.

i love the roastbeef pie they had early this year (2010) but it is no longer available... what branch is that 8-deli sandwich from?? looks yum yum

Haven't had the roastbeef pie, would have wanted to try it. The 8-deli sandwich was from the Pacific Star (Sen. Gil Puyat cor. Makati Aves.) outlet, Legogirl.