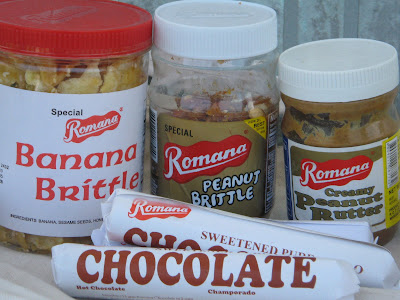 Tourists and visitors to the Philippines' summer capital always lug home one of the city's well-known products - peanut brittle, either as pasalubong, or as a keepsake for one's pantry. Peanut brittle appears in many forms in the city of pines - in very thin, buttery rectangular sheets embedded with pounded peanuts, which are considered the most inferior, and also the cheapest, to whole or halved nuts encased in torn nests of butter caramel in a spectrum of colors, from pale to golden to bronze to dark brown.

Among these, the most popular, and the most expensive, are two brands considered neck-to-neck rivals - Tantamco's and Romana's. A national broadsheet once featured an article comparing the two products point for point. I am not going to do that here, since, honestly, I can't tell much of a difference between the two.

But if I were to choose one to promote, I'd do that for Romana's, because, as I learned only a few years ago myself, it is a brand sprung and grown in my home province of Pangasinan.

Specifically, it was born in the municipality of Mangaldan, which is adjacent to the pilgrimage town of Manaoag. I learned about this because my husband traces his family roots to Mangaldan, and we inevitably visited the town every time we are home.

At first I thought those billboards of the Romana's trademark label I had been seeing were in imitation of the Baguio delicacy, or at best an outlet carrying Baguio products, so would cost more. So I had been surprised to know the truth when I had the chance to visit the outlets.

But the surprise did not end there, because, it turns out, Romana's is not just a label for one of the best (dare I say the best?) peanut brittle in the country (whole roasted peanuts in crackly, buttery toffee caramel), but also for a whole slew of other peanut products, and more.

Sometimes there's also the provincial bibingka - small white things made with ground rice and slivers of coconut meat, not fluffy and eggy like the Metro Manila versions but dense and heavy, and slightly sweet, akin to puto and not cakey.

My husband drives by the outlets, fast, whenever we're in Mangaldan because of the sugar overload the family is likely to get from all those sweet things. But once in a while, about once or twice a year, he takes pity on me, and drops me off to indulge myself.

And of course every balikbayan we entertain is likely to be brought to Romana's, for a taste, or a reminiscing, as well as for a box of goodies to take home, wherever in the world it is.

Romana's is worth making a side trip to from a pilgrimage to Manaoag. It is just a few kilometers away, going towards Dagupan City. Aside from Romana's, the town's not-to-miss offerings include intemtem, better known as tupig, the pancit at the New Mangaldan Panciteria (better know locally as the bangking pancitan) along Rizal Avenue by the public market, which is good eaten with Manaoag puto, and the tapan dweg (tapang kalabaw, carabao/water buffalo beef jerky) at the town market.

*Two outlets in Mangaldan, Pangasinan, one by the side of the town plaza across the municipal hall, on the way to Manaoag, and at the tourist patio at the corner of the block occupied by the Roman Catholic Church

i like the peanut brittle with nuts that's durog... hehe.. now i'm interested to try the banana brittle since I love banana chips. :)