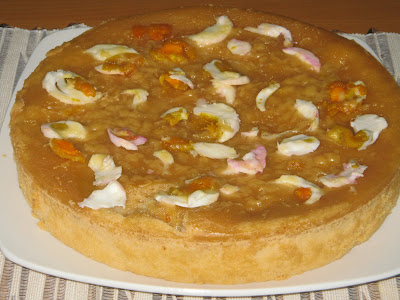 No, I wasn't aiming to make tikoy - that sticky, gooey, rice delicacy that come in many forms and variants and versions, and is known by various names across Asia - at all. I was trying to make puto, a similar delicacy made of rice, but uses leavener and so is not as sticky.

I had scouted the internet for puto recipes. I wasn't even aiming for a Calasiao puto, as I know it would take a special session with a genuine Calasiao puto maker for that, and even then there would be no guarantee that the results would be satisfactory (here's why).

I had eaten a very nice, moist puto at a kiddie birthday party held at the home of a neighbor. The puto was made no less than by the celebrator's grandmother, but much as I begged, the lola couldn't put down the recipe on paper.

So I had to search for a recipe. You see, I am much of a puto-lover, but I grew up on Calasiao puto, so it is the puto of all puto for me. Since Calasiao puto is uber-moist and bouncy, all other puto are parchingly dry in comparison, for me.

But that puto at the children's party was good enough, moist enough, for me. I itched to re-create it. I was consumed by it, and I had to have my puto fix.

Then I saw this puto recipe by Manang Celia Kusinera, a Filipina blogging in UK at English Patis, and it looked like what I had eaten at that birthday party.

It was simple enough, the ingredients readily available, though it works with baking soda, not yeast (which I suspect is used on Calasiao puto - you could taste it).

So I went to the grocery, where all the ingredients could be sourced, and proceeded to make several batches. And everything turned out into tikoy, in the shape of flattened muffins.

When I told the story to friends and had them sample it, they christened it putokoy, because it is tikoy from a puto recipe.

Yes, I had the courage to offer it to friends, and proceeded to offer it to everybody else besides who came to parties I subsequently hosted. Yes, I had the guts to serve it during parties, and bring it to pot luck gatherings. And I have been doing so these last three years, ever since that accident.

Because this accidental tikoy is probably the best tikoy I've ever eaten. And based on the reactions of those who have eaten it, I think I'm not alone in this opinioin. 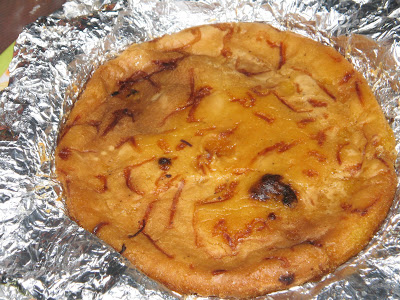 It's not the white, gelatinous starchy Chinese tikoy served and given away during Chinese new year, or even the variously-flavored, filled tikoy rolls eaten year-round.

This is more of a Filipino tikoy, milky and sweet, but still sticky and gooey. I love it because it is a cross between my two favorite kakanin - the Quezon tikoy that is a bronze-brown and sports a sheen, not available anywhere else because it is so perishable it lasts only a few days, and the Ilocano bibingka (in photo) made of glutinous rice, sprinkled with grated cheese on top, wrapped in aluminum foil, and is known variously as Vigan bibingka, royal bibingka, cheese bibingka. 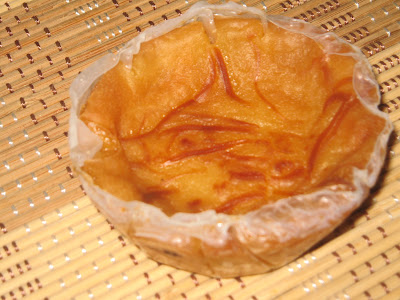 The baking soda make the sides of the tikoy a bit cakey, but inside it is one solid mass, all soft and sticky, chewy enough to hold its shape, but not so seriously that it harms one's dentures. I steam it in an 8" round tin cake pan, and usually serve two pieces for parties, one topped with sliced salted duck eggs, the other with grated cheese.

The saltiness of the two toppings counter nicely the sweetness of the "putokoy." They are both popular, but just two is enough even for a big party, as they are dense and heavy, so only one thin slice per guest is needed, and I usually have other desserts on the table.

And this is, for me, way better than the Chinese new year tikoy that needs to be fried. It is steamed, and keeps for days at room temperature, not turning tough or chewy.

So what caused the accident? As I am wont to do when grocery shoppping, I picked up the wrong flour. The puto recipe specifies using powdered/ground rice flour, but I inadvertently bought powdered glutinous rice flour, and used it without checking the label. I only checked, and found out, when the tikoy didn't rise. It was an accident waiting to happen. But an accident that produced a most happy result, and I haven't looked back since.

(Note: A big thanks to Manang Celia for the recipe. I follow it to the letter, making an exception only on the flour and increasing the amount of milk by substituting the water needed with milk. I have tried making puto, too, and it is commendable that the amounts specified for the ingredients are the exact ones needed - I tried increasing the sugar to make my puto more moist, but they turned out overly sweet.)


Can be served cold. Keeps at room temperature for about 2 days. Or keep in the refrigerator and pop in the oven for a few minutes before serving.

*In the Philippines, packaged rice flour comes in 500gram packs, which is about 3 cups, under the Peotraco label and an unreadable Vietnamese brand. Available in SM supermarkets and Rustan's groceries, and at the Cavite City public market (don't know in other public markets). If the label says it is rice flour, this is the flour that can be used for puto. For tikoy, buy the kind that specifically states that it is glutinous rice flour. The original recipe calls for plain flour, which I take to be all-purpose flour. I used rice flour because I know the puto I like is made with rice.

**When using topping (either grated cheese or sliced salted duck eggs), sprinkle on top of the tikoy when surface is bubbly and batter has thickened a bit, about halfway through the steaming.

***If making two round pieces tikoy, just double the amounts of all ingredients and use two pans.
Posted by Kai at 9:18 PM

where is the recipe ?

Hi, you can click the highlighted/colored words "puto recipe" in the 6th paragraph, and it will lead you to the original recipe at English Patis.

I'll try to insert the recipe as well, pending permission from the author.

Wow... this is some find. I'm not quite a big fan of tikoy, especially the variety sold in Chinese communities in Metro Manila, but a Filipino version sounds tempting. I'll try making this come Lunar New Year.

Not really contradictory, hehehe, we've been assimilating Chinese things forever, why not something Filipino for a Chinese celebration? For a change ;-)