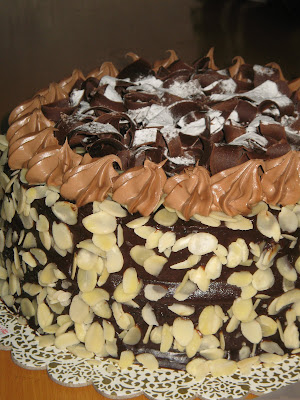 As the family marks my third child’s progress onto her first year, I will be celebrating her monthly birth day in this blog by featuring a cake. Lined up for the next twelve months, and hopefully on afterwards, are old-time favorites, reliable standards, as well as new discoveries, as I go on a quest for the best cakes around the country.

I regularly pass by this restaurant, Malen's, along Noveleta in Cavite, going to and coming from work. The restaurant sports the subtitle pizza, pasta, bakeshop. I haven't had the chance to eat there yet, except once when we tried the Filipino dinner buffet served on Tuesdays and Fridays.

But I went out of my way to drop by this week, as I remembered the "bakeshop" appellation. I haven't been out of town much lately, and I am getting tired of suffering one frustration after another sampling Metro Manila's cakes.

Malen's bakes a few cakes, but there are a lot of refrigerated, graham- or chiffon-based floats, tortes and trifles. Which I haven't tried as I don't buy this kind of desserts - they're easy to make and much more cost effective home-made.

The baked cakes are all chocolate based - the usual black forest, rocky road, chocolate fudge, and almond chocolate fudge. I was told that the first two's cake base is not pure chocolate. That, and the fact that I never liked any black forest cake I've tried, and I hate rocky road ice cream, nudged me to the last two.

Which are cakes of the pure chocolate kind. The chocolate fudge is the simpler, more basic version - black chocolate pound cake in two layers, coated with a thick ganache of milk chocolate that's also present between the layers of chocolate cake, decorated with cylinders of chocolate shavings on the sides and on top. It is an elaborate, and a bit sweeter, version of the astounding Belgian chocolate cake at a La Creme in San Fernando City, Pampanga. 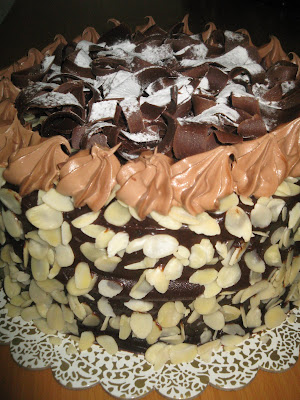 The almond chocolate fudge is the fancier kind. The same cake base and icing, patted with almond slices, piped with whipped milk chocolate creme, sprinkled on top with shaved chocolate curls, then finished off with a dusting of powdered sugar. 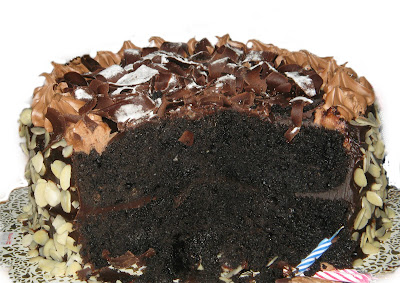 The chocolate cake is dense - so tight-crumbed and heavy - and very buttery. Nutty, too. Pure chocolate to the core - so pure that it's black. It is also very lightly sweetened, that it almost has the tendency to be cloying, especially since the cake is almost six inches thick, so even a thin slice will get you too much cake.

But thankfully, the filling and icing are a bit overboard sweet, which nicely makes up for the seemingly sugar-free crumb (is it just me, or does your mind violently react to low-sugar chocolate, too?).

On its own the cake could also have been boring, but the ganache, creme, chocolate swirls and almonds provide scintillating contrasts in sweetness, texture, flavor, with gradations of chocolate in many forms.

A success story, for me.

As a diabetic I can only dream! Roz