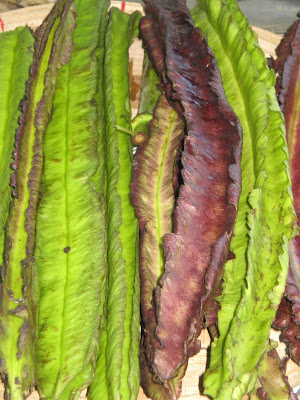 (If it is called something else in your area please let me know via the comments section or email, so we could compile the local names, listed below)

In the Pangasinan language we call it cabuey (KA-BEY, with a guttural e, as in perm) or gabuey. My dad once told me the plant is a weed - it grows just about anywhere, on its own, and without any care - and is valued as a weed. But we eat the fruit (the elongated, square-angled pod), cooked as a vegetable.

What little literature about this vegetable indicates that it is a perennial, but I see the fruits only seasonally, like about half the year, starting from the end of the rainy season. And the whole plant can be eaten, including the flowers and roots.

The pod comes in two colors - waxy green, and red violet - and in two sizes - really long ones, about a foot, and the really short ones, three inches or thereabouts. It contains vitamins A and C, calcium, iron, and other trace vitamins.

Unlike any other pod that I know, the cabuey is four-cornered, but thankfully there are only two "strings" that need to be pulled out from its "seams" before cooking. Frills, or linear "wings," run along all four corners, thus the name.

Cabuey has to be harvested young, or else it becomes rubbery and inedible. And it has to be cooked on the same day it was harvested, to get its premium taste (likened to asparagus). I've seen it sliced thinly and stewed in gata (coconut milk), a common dish in Kapampangan restaurants, called gising-gising. In Pangasinan it is boiled with bagoong isda (salted fermented fish in paste) and a thumb of ginger, along with other vegetables, like squash and string beans, perhaps, or maybe sliced green papaya. A common Ilocano mix is patani, bataw, and sigarillas.

Yields one serving. String beans can also be added, even kamansi, and okra.


Names in other areas in the Philippines

Thanks for the added info! Where in the Philippines is this called pallang, please?

Amazing coincidence! I was just describing what we call in daet as pagulong and you have just blogged about it. Ang sarap nya sa bulanglang! I am so into native vegetables right now. I'll look for kamansi next time. Ang tawag naman sa amin ay ugob. For pagulong, if freshly picked, isinasapaw lang namin sa sinaing then sawsawan of calamansi and patis. Or cooked in coconut milk, ang pang alat ay dinailan. With dried shrimps and shredded tinapa. The smell of dinailan wafts in every daet household every lunchtime. I'll bring you some the next time i'm in daet.

I remember singing that song when I was little during the war. I only remember the first verse, even the melody. My that brings some memories. Mrs. L asked me if I ever ate this but I am not sure. I probably did but just don't remember. Although I remember eating kankong (spelling)? Oh well, the older the get the worst my memories get but that song just popped up for me. Roz

It's kangkong, Tita Roz, it's been a long time you've been here, and it's amazing you still remember. I'd like to try covering all the veggies enumerated in that folk song since they seem to be inundating the markets these days.

Mang Bert, ohmygosh, gele-gele or gourami is hard to find these days. I love cabuey with papayas and mushrooms. Thanks for the dish you wrote about, I haven't tried that, I'll make some this weekend. I'd have to use cultured oyster mushrooms, though, that is, if I could some in the groceries, since the thunderstorm season is months away, which makes the possibility of finding wild mushrooms around banana stalks nil.

In Hiligaynon, we call this vegetable Balagay. Dito sa amin sa Bacolod I like this sautéed with beef strips and mushrooms. Sarap!!!

I think this is what they call sigarilyas in Manila.