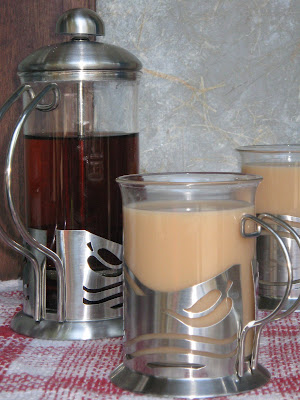 The weather’s been freakish this last week. Right smack in the middle of a raging summer, persistent rains have been soaking pavements, buildings, and the patches of soil in between, turning canals, rivers and creeks roiling and foaming as they make their way to the sea. The over-all effect of which is like the summer was rudely cut-off, and the rainy season has earnestly begun, with all teeth bared.

Showers, maybe a little rain, are not a strange occurrence during summer. But not rains that last beyond a day, that wake up the frogs and make them croak in a symphony like it’s August, when the soil’s been waterlogged for weeks. The rains – referred to in that catch-all phrase ITCZ (short for inter-tropical convergent zone) comprising any weather disturbance not caused by a typhoon – have been predicted, but I’m sure the intensity, and persistence, caught everybody by surprise.

Not that I’m complaining. We haven’t fully enjoyed our fruit shakes yet, but we make the most of it by indulging in other dishes temporarily banned from the table because of the heat. Like arroz caldo. Hot soups. Stewed meats.

Most importantly, I get to indulge, if only for a brief moment, drinking a warming, calming mug of hot milk tea.

I grew up in a household that treated tea as belonging to the arsenal of home remedies. In particular, diarrhea, and any other stomach trouble, required only a few fresh leaves from the tea plant growing in the front lawn, which were then boiled, and the resulting amber liquid imbibed. The flavors were too subtle to be enjoyed in a leisurely cup.

My current collection of teas from around the world is testament to how much I have changed. Not only with how I regard tea, but also with how my tastebuds have evolved.

Early in my college years I happened to find myself one summer afternoon in a small apartment in downtown Paris. And my host was offering tea. I retorted, silently, in my head, that I haven’t had diarrhea in a long time. But of course to my host I smiled, and graciously accepted. But the host had to ask if I wanted it with milk. Milk? With tea? Maybe she wanted me to have diarrhea.

But I murmured oui, sil vous plait, along with a prayer to St. Jude.

Nothing untoward happened. But then again, the taste wasn’t memorable. The tea was too subtly flavored to have survived the onslaught of the milk.

I went around Western Europe for the entire summer, though, and experienced the exhilarating flavors of various teas. Without milk, and with dishes that complement them.

But it wasn’t until I went to Japan one winter that I fully appreciated what milk tea is truly about.

My trip was defined by long walks around parks and various landmarks, and long walks going to and from famous temples, well into the night. As it was my first time to experience winter the cold was penetrating, and made a lasting impression.

Walking was a warming exercise, but I couldn’t escape the cold during moments when I had to stand still in order to absorb the beauty of a golden temple mirrored on the surface of a pond, or take in the expanse of a Buddha statue, or scrutinize the early blossoms of a flowering cherry tree (sakura), or simply ponder a deer’s nose nuzzling my wool coat.

But I was able to soak in the ambience of many wonderful things and places, with the help of milk tea. Specifically, of hot cans of Kirin afternoon milk tea, from the famous Japanese beer-maker. Many vendo machines warming tall slim cans of coffee and teas dot roadsides and tourist spots, providing easy access to many gratifying, warming moments before moving on to the next stop in the itinerary. 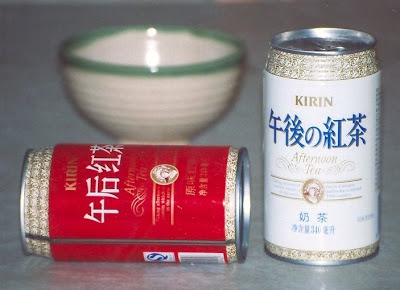 The Japanese milk tea made an impression on me. It helped that it was a source of comfort during the cold days of my wanderings, but on its own it was a satisfying, full-bodied can. The flavor of the tea was not suffocated by the milk, since what was used was soy milk, which was less forceful and more complementary in taste. The flavors actually melded.

I have come a long way since that winter, and a lot of cafes and tea salons have invaded Metro Manila since then. I have discovered that, as with the variety of teas, there are also many kinds of milk tea. Even powdered milk tea is now available in single serve packets and with such accessible price in groceries these days, though they are not much good, for me.

Freshly brewed tea tastes best, and I can say so because I make some - actually much, and frequently - at home for an enjoyment custom-made to my and my family’s preferences. A big part of my tea collection is devoted to milk teas. 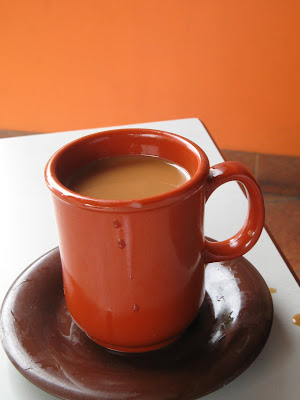 I enjoy a cup at tea salons every once in a while, and I find that I prefer those coming from the cuisines of Asia. Thai tea. Egyptian tea. Indian tea. I even love the nai cha, in both the hot and cold versions, of fastfood chain Chowking (I found that they use Steuart’s). One of the first milk teas I got addicted to was chai tea, though the versions of most cafes are overpowered by the milk (dairy) used. 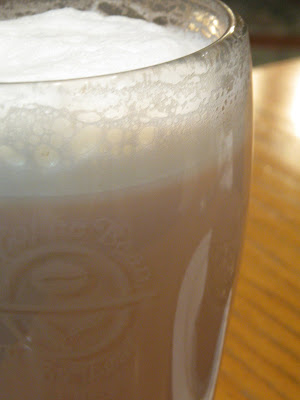 But the most common and well-known tea blend, English Breakfast, for milk tea can suffice for home use, and it has warmed many a cold morning, be it rainy season or during the cold holidays. I have also discovered that I could approximate the red milk tea by blending maple tea and rooibos.

Makasubok nga. Meron mga satchet ngayon sa grocery, but I've never tried it bcoz of my preference for coffee. Pro siguro di kasng sarap kaysa the ones you had in Japan. Hehe.

Growing up in Lingayen, my family always had milk with our Lipton tea. We had coffee, at times, when
visitors are around.