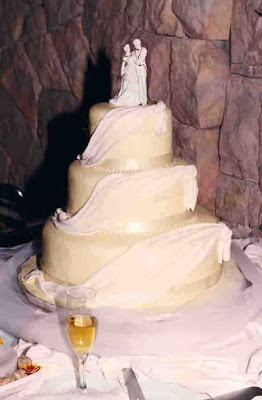 When it had been time for me to decide where to source my wedding cake several years ago, I only had one choice.

Well, it helped that the baker is the sister of my then groom-to-be's grade and high school classmate, so we were able to get a big discount. But we actually had no choice - we were going to hold the wedding in Baguio City, and we didn't know any reputable bakers there.

Besides our acquaintance, though, Pinkie's baker (the bakeshop was named after the youngest in the family, while the baker is the oldest daughter), had got a real good reputation in Dagupan City and the rest of the province of Pangasinan. That time all bakeshops had all been local, and she was one of the only few who had acquired cake-making skills abroad.

I was ecstatic when she agreed to do a cake my groom and I had envisioned, which resulted in the simple but elegant, beige-dyed, layered fondant cake above. It matched perfectly the flower arrangements at church, the intentionally sparse decor of the reception venue, and the color and design motif of the entourage. We were even touched when she volunteered to take the cake to Baguio City, from her bakeshop in Dagupan City, herself (she and her whole family had been invited, of course).

She is such a talented baker that most of the cakes she does are executions of the whims of brides, and maybe debutantes she has satisfied. So she has a catalogue of all the original designs she had done, and the best part of it is that she has named all those cakes after the ones who conceptualized them in their imaginations.

So the cake above had been named after me, in her book. Not the name I use in this blog, which is just a nickname, but my full name. It is a three-layered fondant cake decorated with sugar white "drapes," and ribbons and pearls in matching colors. The cake was carrot-walnut, but only for the top and bottom layers. The middle layer was made of styrofoam for the entire cake to hold up, but the carrot-walnut cake intended for that layer was given to us, unadorned, after the ceremony.

Related Posts
Chicken in Mangoes
The cakes in the Cake of the Month series
Posted by Kai at 2:08 PM

Email ThisBlogThis!Share to TwitterShare to FacebookShare to Pinterest
Labels: cake of the month