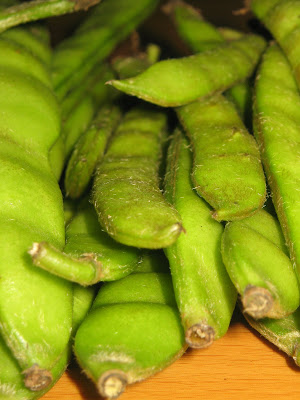 In Pangasinan we call this bunga'y lakamas, which translates to bunga ng singkamas in Filipino, and "potato bean fruit" or "yam bean fruit" in English (American and British, respectively).

These are the pods of the lakamas/singkamas/jicama (Pachyrrhizus erosus Linn.), which is more popularly known for its root, a white, sweetish succulent turnip-like tuber that is snacked on in the Philippines, peeled and julienned and dipped in salt or salted vinegar, and also added in salads and cooked as a vegetable, mainly for its crunch factor.

The pods are somewhat a cross between green beans (called Baguio beans in the Philippines) and snowpeas - not as bulging as the former but not as flat as the latter, just halfway through. But unlike these two smooth pods, jicama pods are quite hairy, though finely enough so as not to be frightening.

They come out only in summer, and in such small quantities that I get so spirited when I spot a bundle in the markets in Pangasinan. They should be harvested immature to be edible, or they turn a plastic-like texture when cooked. 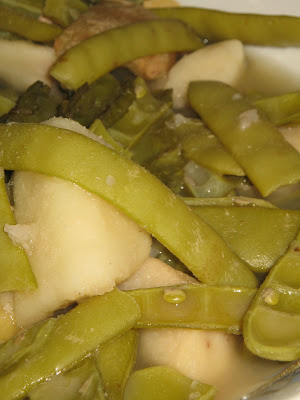 We cook the pods in a stew of okra and luko (gabi/taro), sometimes with squash, flavored with bagoong isda (salted fermented anchovies), and a piece of pork, but preferably the head of fried or grilled fish (bangus, of course). The okra and taro counterpoint the pods with their soft mushiness and chewiness, and the pods make the stew very aromatic, in a green sort of way.

Before cooking, the pods are stringed and split, revealing such tiny seeds that are almost invisible. These seeds, though, are power-packed, as they contain rotinoids, flavonoids, phenylfuranocoumarins, and have effective antifungal and antibacterial properties.

The common term jicama has been adapted in the Philippine languages to the general term singkamas. But as with many terms and names in the country, the name singkamas is ascribed to a misunderstanding between members of the former Spanish colonizers and Filipino indios who could not speak the colonial language.

It narrates in this website that some five Spanish soldiers were touring the countryside and spotted some farmers harvesting singkamas. Upon tasting the tuber, a soldier asked that they be given one each, or five more, which is cinco mas in Spanish.

The farmers, not knowing any better, gave the soldiers another tuber, which resulted in the soldiers repeating cinco mas, cinco mas. Which concluded to the farmers concluding that the tuber must be called cincomas, and adapted the name, with the replacement of the "n" with the "ng" of the local tongue, so becoming singkamas.