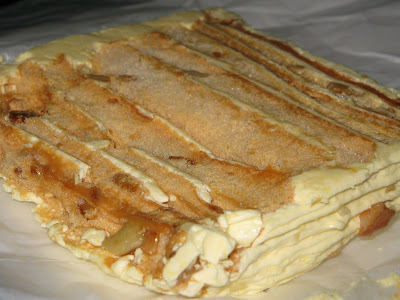 Spent four days, inclusive of a weekend, exploring the southern part of Negros Oriental, in the Visayas, on a child-friendly itinerary. Since my youngest has turned a year old and is already running, though awkwardly and still falls from time to time, I decided it was time to break my self-imposed vacation ban, after two years, and go island hopping.

Nothing too rigorous and too demanding as I had been used to, just a stretch of beach so the children can build sand castles, a grilled picnic among some mangroves, and an entire morning spotting dolphins.

The Dumaguete airport is the nearest access point to the places I wanted to cover, so the city of Dumaguete became our base. Though we stayed there for only one night, we crossed the city several times during our trip, and it was where we naturally ate more than half of our meals.

The House of Sans Rival, near the famed Rizal Boulevard, was one of the few restaurants we made sure to visit. The pastry shop gave rise to The House of Silvanas proliferating in the food courts of most malls in Metro Manila, specializing in silvanas and sambos, which are just really individual-sized sans rival cookies.

Sans Rival was established in 1977 in Dumaguete City. More than three decades later it is still managing a bustling operation in a cute shop done in blue, and serving pre-cooked meals during lunch and dinner hours.

During our visit the outlet was full-packed with people, ordering whole cakes or slices and eating lunch, even though it was still a full hour before noon. We decided to wait for a table while perusing the pastry showcase, taking tabs of what we wanted to sample.

The lunch set looked promising so we took an early meal. It was a good decision, as we enjoyed everything that we ordered, with good value for money. There were two choices for the main dish, accompanied by a bowl of potato salad. 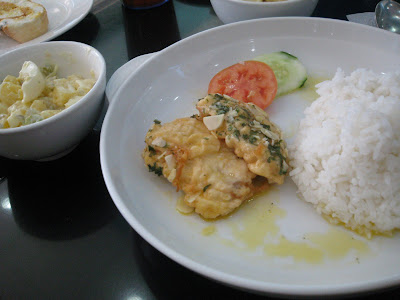 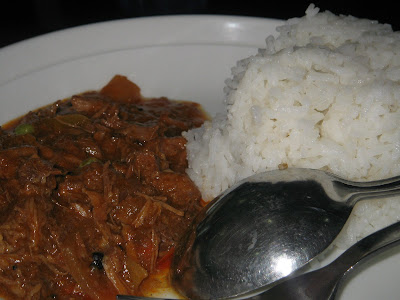 The pastries, while not superbly outstanding, can hold their own compared with many pastry shops in Metro Manila. The ingredients used were not the finest, but they are of good quality, and they were all well-made. This is a bit of a wonder, actually, because not a slice went beyond Php30, with even some priced below Php20, yet in every bite you get something incredibly good.

More importantly, all the pastries that we sampled were very lightly sweetened, so that we were able to finish several without suffering sugar glut, and we left the shop full and satisfied, and in the mood for a leisurely walk along Rizal Boulevard before our flight back to Manila. 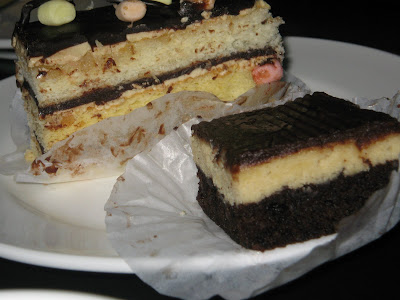 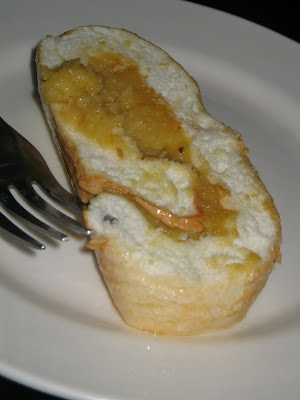 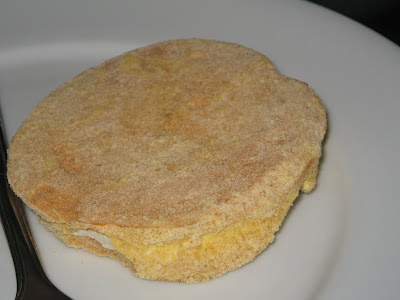 And the sans rival? We nearly weren't able to sample it, as it wasn't displayed in the showcase cabinet. Good thing my companions had the sense to remember what we were there for, and promptly ordered a slice.

Like the rest of the pastries, this sans rival was light in sweetness, but big in flavor. Toasty, spongy meringue layers sandwiching good quality butter and bits of cashew nuts. A cake worthy of being the foundation for which a name, and a legacy, have been built.

For other posts like this, read The Featured Cakes in the
Cake of the Month series
Posted by Kai at 12:44 PM

Email ThisBlogThis!Share to TwitterShare to FacebookShare to Pinterest
Labels: cake of the month, food finds, out of town, regional delicacies, restaurants, tinapay (bread/pastries)

Can't tell you how great it was to read about all of these classic desserts. Been trying my hand at Brazo but results have been very inconsistent.