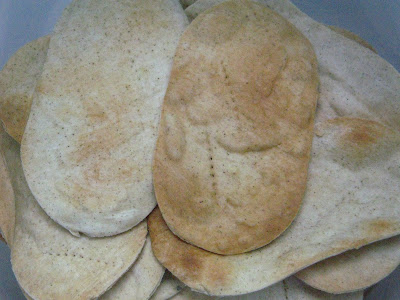 Well...not exactly. They don't taste like they came from heaven, like they want to claim, as they've been christened Manna Crisps. No, not heavenly - not heavenly soft, nor heavenly sweet.

They're the exact opposite. Unyieldingly hard - not even crispy - and almost bland but for a small hint of salt and the flavor of herbs.

I think what the creators wanted to come up with was a way to heaven, in the spirit of abstinence and sacrifice. Manna Crisps is perfect for Lent, at least for those who are serious about fasting. Or for those serious about dieting.

I've long been exempted from both, because for the last seven years or so, if I hadn't been pregnant I've been breastfeeding. But I did eat this last Ash Wednesday, sharing with many others from the big plastic jar container the crisps are sold in (those giant mayonnaise jars), after attending mass. I did eat lunch afterwards, of course. I'm not exactly heavenly.

ooooh! i bought some of these once in the cafeteria. kinda pricey but a dip was included. i liked 'em and would eat 'em everyday, if only they were cheaper...

Oh, really they're expensive? God bless the soul of our generous donor then! Maybe we should be baking some at home....

a little late for this, but I agree with bursky. i liked both the texture and the level of crisp from them and the way they went with the accompanying dip. dont compare them to conventional junk foods. treat them more like crackers compared to which, i'd say they taste a lot better. just wish they were cheaper, really.