Fruits of the Heat 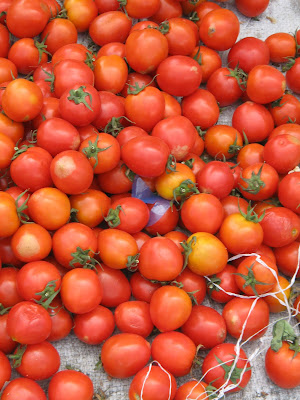 It's doomsday all over the news. The El Nino - the unusual warming in the Equatorial Pacific - is a dreaded phenomenon this year. The Philippines' entire eastern length is adjacent to the Pacific Ocean, after all, and the warm waters' normal effect on the country is devastating droughts.

El Nino has just arrived, but its influence is already felt massively. The once burgeoning San Roque dam, responsible for submerging northern Luzon last year is now almost dry. It's been very hot - summer hot, a month before the official start of summer - and showers have not come when normally February brings rains.

Already there are warnings of power disruptions and shortages for much of the year, since the country depends largely on hydropower. The bad side of being green....

One effect of El Nino, as though to make up for the impending doom, is the early arrival of summer bounty. And such abundance there is! We've had sweet, red huge watermelons and cantaloupes for Christmas, when normally the roads are lined with stalls selling these starting only in April.

Two months before the onset of summer, tomato plants are borne down with innumerable fruits that market prices have plunged down to Php5.00 a kilo (approximately 10 US cents). Farmers don't bother rubbing the fruits with kalburo (a chemical to hasten ripening) but run to the markets as soon as they've harvested to avoid having the fruits rot on the stem. It's us consumers who benefit, because we get fresh, sun-ripened tomatoes untouched by chemicals.

Of course this will not last. There's going to be a lot of belt-tightening in the months ahead. If I could bottle up fresh tomato sauce and stock them up, I would, but they don't last beyond a week or two in the ref. So in the meantime we're trying to enjoy the bounty as much as we can, slicing lots and lots of fresh tomatoes and eating them with agamang and fried and grilled fish.

We've been having lots of stews using fresh tomato sauce - I boil kilos and kilos of fresh tomatoes briefly, skin and deseed them, saute these with garlic and onions, then add chicken cut ups for afritada, or chicken fillet for marengo, or beef chunks for kaldereta, or balls of ground pork, and let the meats simmer for a long time, adding other vegetables in season when done, or topping the sauce on fried fish for a sarciado.

It's also a good time to have ragouts for pasta (hmmm, lasagna!), and homemade pizza using fresh sauce and kasilyo. And Filipino-style paella. 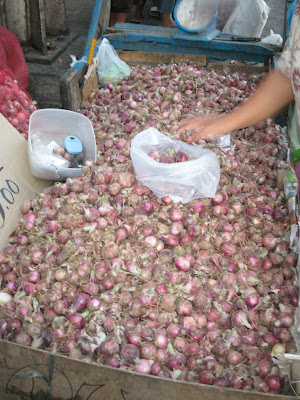 What else is flooding the market - onions! Small, thumb-sized onions, the pungent red and the tamer white, sacks upon sacks of them arriving every minute. The vendors have no time to wipe them clean, and they come dusty and still warm from the heat of the soil. 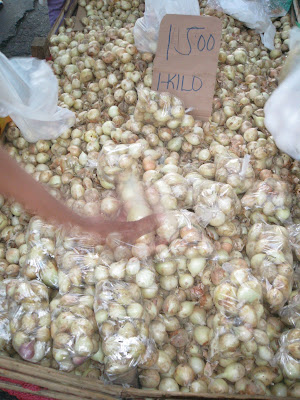 Roving carts overflow with them, enticing buyers to purchase in kilos. At an astounding Php15 per kilo from the Php60 a month before, how could anyone resist? 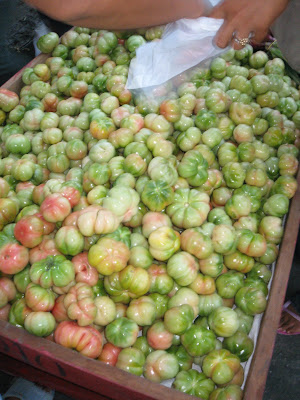 Native tomatoes, with skins thinner than an onion's, sweet and juicy, and come in all imaginable "blooming" shapes. Best eaten fresh, plucked still green because with the heat they ripen before you could blink.

Related Posts
Native Tomatoes
The Politics of A Mango Harvest
Posted by Kai at 9:46 PM

Hmmm... native tomatoes are the ones that I miss most. Here in the US they call it ugly tomato because of its many irregular curves.
Masamit tan mananam no satan teraken mo insan laokan mo ya lasona, asinan mo na bagoong ya agaman (pero mas balebale no walay laok to ya "arorosep" a seaweed. Mangala ka ya inkalot ya bangus a kapanluto... naputer so aklo ed kaldero. Kasumpal mon mangan inom kay lomboy wine ya nanlapod Dasol.What a dream and I hope I could taste it when I go there on the 20th. hehehe

I wish I could give you some of the rain we've been having in our area. Tomato season isn't for a while, but I'm waiting for local spring asparagus which is starting to show up at our farmers markets.

Manong Bert you make me drool! Hope you eat your fill during your vacation!

Mrs. L, thanks, hope you're doing well despite the El Nino's opposite effects in your area.

Oh they're large, larger than what's normal here in the Philippines, though somewhere else they would probably be smaller.