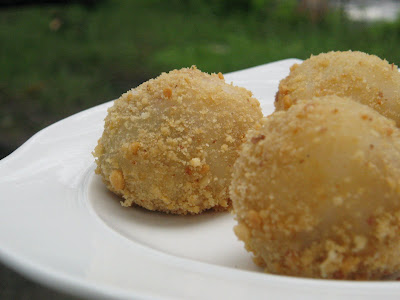 I spelled that title like how it is pronounced in Pangasinan. The common spelling elsewhere is "buchi," but in the Pangasinan language the vowels are hard but does not involve a puckering of the upper lip, while the lower lip is extended down like the floor is acting on it like a magnet.

This is not Pangasinan butse, though. This is more like mochi from the plains of Central Luzon, and maybe even like the mochi from Japan.

In Pangasinan we had butse from the public market in the afternoons - greasy flattened discs of rice dough filled with mashed, sweetened balatong (mung beans, monggo) that had been fried on both sides.

They were quite colorful - the outside crispy brown and dripping with oil from frying, the dough immaculately white, and the chunky filling in the center green, the monggo skins almost intact.

They were a sweet, albeit heavy, afternoon treat. But even then I didn't like all that oil, so they weren't common merienda fare, for as long as I had a say in my merienda.

I am mortified with frying, not only because of the hot spatters, but mainly because I have seen how rice dough can quickly absorb cooking oil - faster than a sponge, and is as much of a guzzler as an SUV. Thinking of all that oil clogging my veins gives me palpitations. 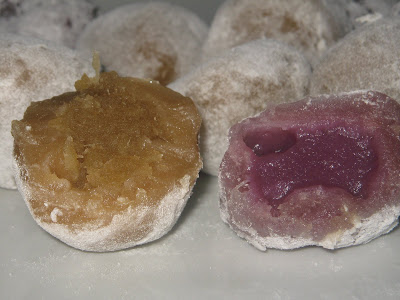 But I have read somewhere that the secret to "healthy" frying - where not too much oil is absorbed - is having the cooking oil very hot so that it creates a barrier in the surface of the food upon contact to prevent oil from going in.

I employ that during times when we have to fry fish, or have fried chicken for the kids, or when we want calamares (crispy-fried battered squid). 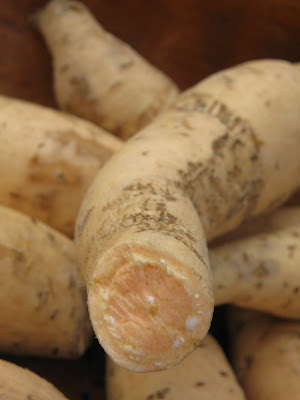 And I've tried it on butse, too - the Pangasinan version - using this peach-colored kamote which turned gold when cooked.

I used the mashed kamote as filling, and mixed with the rice dough so it had a lovely golden shade. The butse, shaped into balls and dropped into a pan full of bubbling oil til they rose to the surface, were crisp on the outside and softly chewy inside. 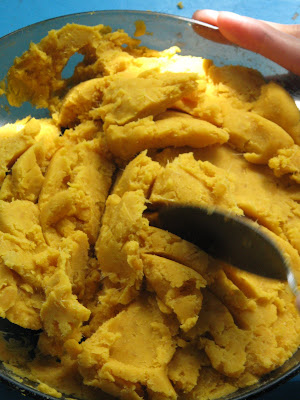 They were quite good. But though the grease was not as much as in my childhood butse, still they had oil. So I resolved to do it another way.

I first thought of baking them in gata (coconut cream), but quickly discarded the idea since I wanted to play around with the colors of the balls of buchi, not just with the filling. 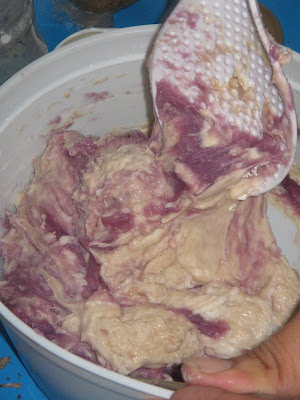 I had bottles of Good Shepherd ube jam in the ref, and several other opened bottles of sweet things on the kitchen shelf - Nutella, peanut butter, guava jam, coco jam. Since it's a new year I thought it was time to use them all up.

I mixed them with powdered glutinous rice (malagkit) that's been moistened with water, so that the butse dough was the color of its filling. Formed little flattened discs, put a teaspoonful of the filling in the center, closed up the dough by gathering all the edges upward and formed them into little balls.

Dropped the balls into a pan half-filled with briskly boiling water. Waited about two minutes more after the balls rose up to the surface for them to be thoroughly cooked and tender.

I tried coating the balls with powdered sugar, but they turned dripping wet, so I just rolled them in more powdered glutinous rice. But the butse filled with kamote, peanut butter and Nutella were scrumptious with a coating of peanuts pounded in a mortar, or unmsweetened cocoa powder.


A sister-in-law related a Kapampangan friend making boiled (or steamed) buchi with a core of yema (egg yolks cooked with condensed milk) and rolled on grated young coconut meat. I'm dying to make that.

This brings back memories of Bai. BTW, yesterday I saw TUPIG, among other native delicacies in the frozen section of a San Francisco Asian grocery. I think I'm going back to get some now.

The tip about heating the oil really well to seal the surface is appreciated, especially for those of us who need to watch what we eat. - louinsanfran

Wow, tupig in San Francsco! That's amazing. BUt I wonder how they taste like. Duma so taway na kapanluto. I posted a recipe for one years ago, using powdered rice flour.