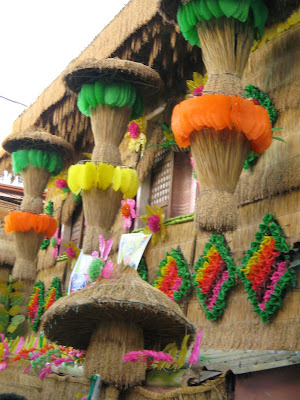 The first and last time I went to see the Pahiyas Festival in Lukban, Quezon was 16 good, long years ago, when I was with friends visiting a friend and we were all blisful, carefree singles.

Now we are joyfully blessed with kids, and we thought it was time to introduce the festival to the next generation (ugh, it feels old to write that), and to relive our past adventure.

So with eight kids in tow ranging in age from 3 to 14, yayas, water bottles, change of clothes, hand towels to sop up sweat, it was impractical to bring a high resolution camera, particularly since a four-hour walk was involved.

Which I regret, since I don't have a single, good quality photo of the event. But no matter, since the kids had the time of their lives and promised to one another to get together again for next year's festival.

Pahiyas from the 1990s and this year had the same vibe, with all the colors and display of agricultural bounty that is what the celebration is all about. The most notable difference, though, was this year's prevalent use of palay (unhulled rice), the kiping that used to be the festival's trademark now relegated to accents of color on the backdrop of tawny brown.

And of course the crowds this year were colossal, amplified by the narrow streets that hosted this year's festival (zones take turns yearly, though I've noted Southern Tagalog streets are really narrow, on the average). It was a challenge to take pictures, what with two-story high decor and not a lot of room to maneuver. 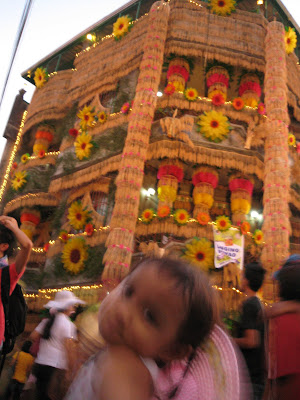 We waited til the afternoon to go there so the sun wasn't blazing, and we got to see the splendor of the Pahiyas lighted up at dusk.

This five-story residential building literally stood out fully bedecked in palay and kiping chandeliers and sunflowers. It didn't garner the first prize (yes, there's a competition), but it received a consolation and a citation, though I don't think the cash prize of P10,000 was enough to cover the expenses for the design materials plus labor and conceptualization. 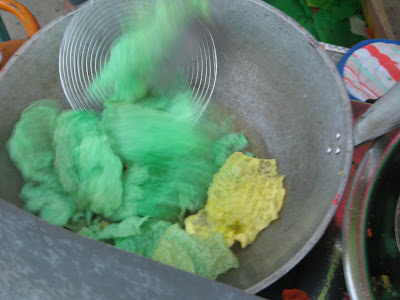 As with any other fiesta, food wasn't lacking, from the common street treats - boiled corn on the cob brushed with margarine and sprinkled with salt, boiled quail eggs, cotton candy, ice scramble - to the more regional fare kiping kropek, pancit hab-hab and special tikoy. 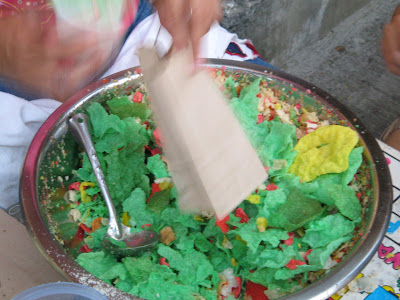 Kiping is thin, leaf-shaped wafer made by pounding rice to a paste and molding it on large real leaves, which are then dried and dyed. Kiping is an integral part of Pahiyas, defining the festival and differentiating it from all others.

After the festival, kiping is usually given away to be cooked into edible chips. But during the festival we passed by a group of middle-aged women frying up some kiping into kropek, which are broken up into small pieces and bagged with a sprinkle of sugar. 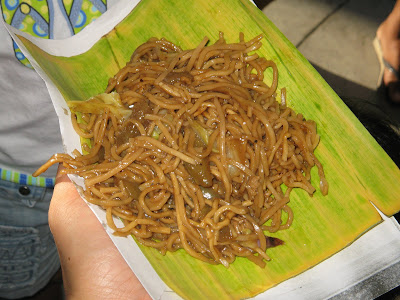 Then of course there was pancit hab-hab, which, even though it was being cooked in front of every other house along the festival route it kept running out. 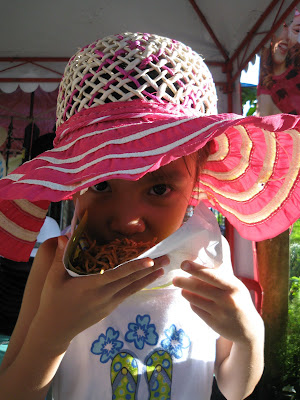 Pahiyas was "green" - all merchandise were wrapped in brown (recycled) paper bags. Pancit hab-hab came in the traditional squares of cut banana leaf which functioned as mobile plates.

Pancit hab-hab is one of the well-known specialties of the municipality of Lukban. It is dried miki noodles sauteed with minced pork and julienned sayote, seasoned with soy sauce and cracked black pepper, then doused with spiced coconut vinegar. 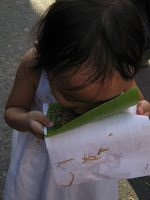 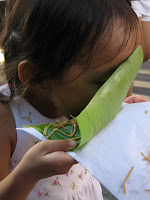 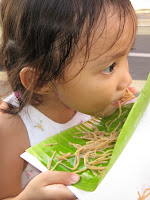 It is so-called because it is eaten hab-hab style, in the manner of hogs - no utensils employed, just bring up the noodles to your wide-open maw and enjoy while standing by the side of the street. 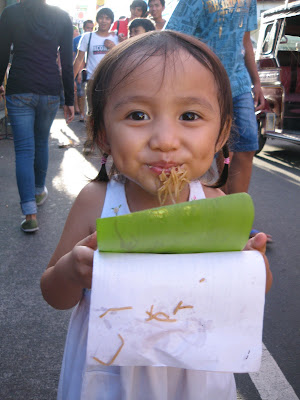 One of the reasons I didn't hear any single complaint from any of the kids, even though it was sweltering hot, the sun was right smack in front of us while walking, and we walked non-stop, was because food was abundant all along the festival route and even on the roads leading there. So the kids were kept full and energized. 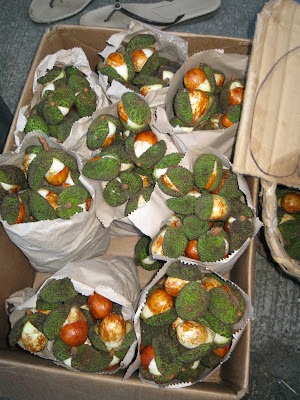 I've always think to go there in Pahiyas Festival.. But sad to say I am a busy person. I'm hoping next year I would go there and will watch the pahiyas festival. :) Hoping!

Mare very nice write up! makes me want to be there in the festivity and eat " hab-hab"! What a talent in writing!

And your "hab -hab" photos of Nikka( or was that Arwen?) - natural na natural!!
I like it!

Hope we can join you next year!( do let me know in advance! things get really hectic in summer!)