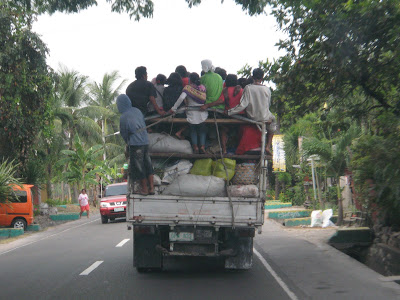 Certain areas in the Philippines call for a road trip. Besides having a lot of cool and lovely places to stop by, with million-dollar views along the way, the more important thing is that the roads are wide, smooth, and kept in top shape.

While I was growing up I had heard of two places discussed among adults as road trip havens. Ilocos was one, because then President Marcos took care to have all roads leading to his home province of Ilocos Norte all nifty, so it looked like all the budgeted and intended cement and asphalt were actually poured onto the roads.

Northwestern Pangasinan was another, the winding roads affording spectacular views of the expanse of the Lingayen Gulf. Going around the country starting in the early nineties I didn’t find any to add to these two, all inter-provincial roads and national highways rutted, didn’t exist at all, or at the least proving to be inadequate.

But my travels these last few years unraveled some terrific places for a road trip. Sarangani Province, whose ultra-sleek highways left me breathless and about which I should write about longer soon, tops my list thus far.

The latest one I've discovered is Southern Cebu. I was last here more than a decade ago, riding a commuter van that maneuvered its way along pot-holed, un-asphalted roads. This time, though, the roads are top-notch and almost large enough for a Boeing to land (except of course along the mountain passes).

That truck (photo above) on its way to the market, whose bed was converted into a three-decker to hold crops and other agricultural products plus household goods, with the vendors seated on a makeshift bench at the edge of it all, is an unequivocal guarantee of the mint condition of the roads.

I joined my husband’s company outing to enjoy several forms of water recreation, in both fresh and marine, and the first leg of the road trip traversed six towns on the southeastern side of the island along the Bohol Strait. We left early in the morning sans breakfast, with only a few pandesal to whet our appetites, in anticipation of the provincial treats we would encounter along the way.

For what is a road trip without the roadside dainties? 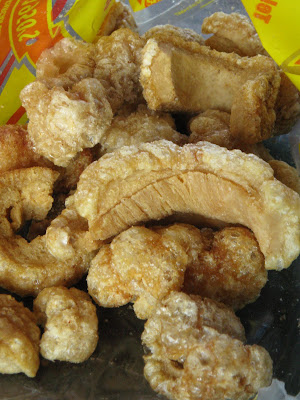 But it was nothing dainty what met us on our first stop-over. It was huge, fat-laden, oil-drenched and crackly. It was the well-known Carcar chicharon, thick morsels of fatty rinds plus the characteristic layer of meat sold all around the rotunda by the city center.

The chicharon business is a serious one, and a real big enterprise, such that Carcar City has a barangay named Baho (I'm not joking here), purportedly so named because all the piggeries that supply the pork requirement of the chicharon business are located there. A bio-mass power plant installed there could probably supply all the city’s energy requirements and then some.

Cebu City locals say when in Carcar the brand to buy is "Mat Mat." Others in the group bought other brands so I got to taste them, too, and I was more impressed with the chicharon offered by vendors walking around. I found Mat Mat's to be a bit on the bland side, though I'm sure the others were loaded with salt and MSG. 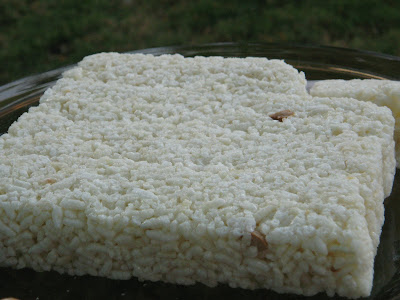 All eyes were on the chicharon, yes, so I failed to notice there were other items displayed in the chicharon kiosks. But being in Bisaya country a red flag that brandishes tourist! sticks out the moment I open my mouth.

So next thing I know I am being offered ampao, supposedly a Carcar specialty with peanuts (I found only two emaciated pieces), and multi-colored bukayo. 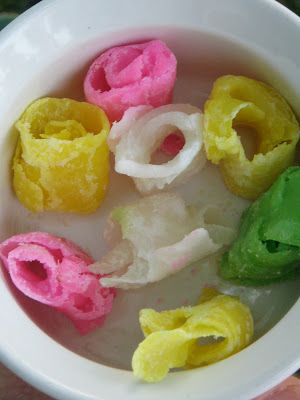 White ampao is a novelty for me, being used to the bronzed ones of my childhood, so I had to buy. And I think I need not explain why I had to include the bukayo, too, which were thick slivers of crunch rolled to resemble roses. 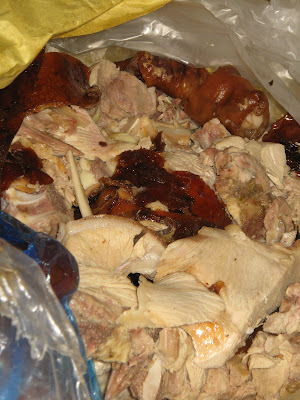 I had all the time I wanted to roam around Carcar because the head of the food committee for the outing was negotiating for a Carcar lechon, which was to be our lunch. Once it was packed and stuffed into the luggage compartment, conversation centered around how cheap Carcar lechon was.

It sold for P270 a kilo, while Cebu City’s CNT retails lechon for about P350 a kilo. The P80 difference translates to more than a thousand peso savings for an entire roasted pig. Logistics was offered as a big contributor to the cost (CNT surely sources from piggeries outside the city), as well as labor. 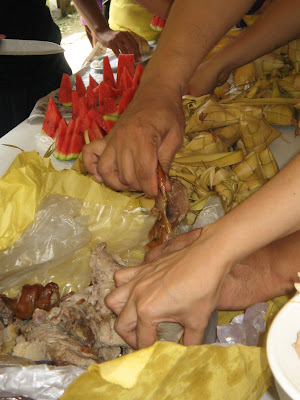 But after lunch – the lechon accompanied by puso, steamed rice conveniently packed individually in coconut fronds – we understood why Carcar lechon was cheaper.

It was nondescript – so totally lacking in flavor that we were rooting out the meat by the ribs adjacent to the tanglad and some garlic stuffed in the stomach cavity, and which was understandably salty.

It was noteworthy, though, that after more than two hours in an air-conditioned van the skin was still crispy. And it was razor thin and not too fatty.

But lechon is really big in Cebu. All groups we saw having a picnic that day and the next, by the waterfalls and by the beach, both of which were bursting to the seams with crowds, all had a lechon centerpiece. For breakfast, lunch, dinner and otherwise. 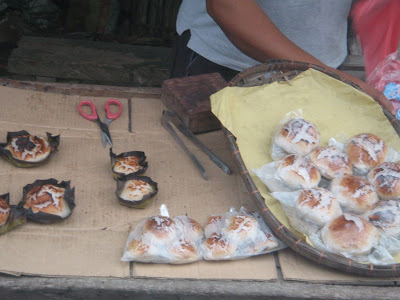 Carcar was in the mid-section of our road trip, but it was just the beginning of our food finds. From there we crossed the mountains to the western side of the island, and by Barili we passed by lines of smoky sheds selling bibingka. 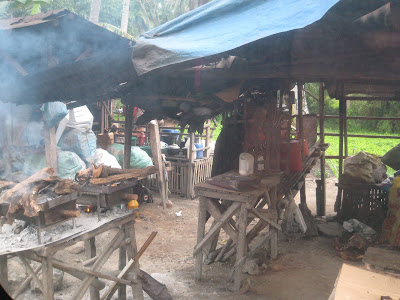 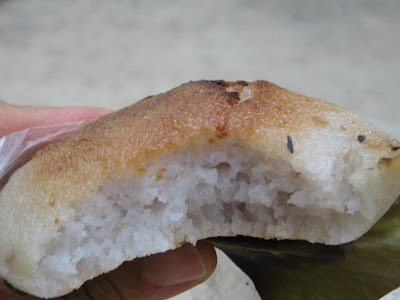 And it was bibingka the countryside way – thick, dense and chewy, made of real galapong (ground rice), not the cakey, airy, eggy and uberly-expensive ones so popular in Metro Manila. 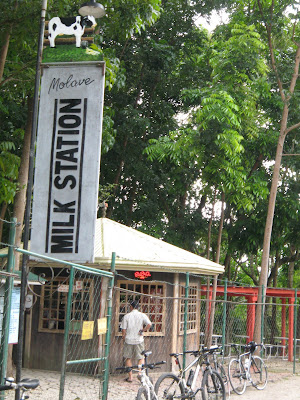 Also in Barili was an anticipated stop – for fresh milk and ice cream! It was 8:30 in the morning and I am lactose-intolerant, but when I am on a road trip it’s as if I am liberated of all sense of propriety.

So we get off and troop to have incredible vanilla soft ice cream at the Molave Milk Station tucked into a stand of molave trees by a roadbend. 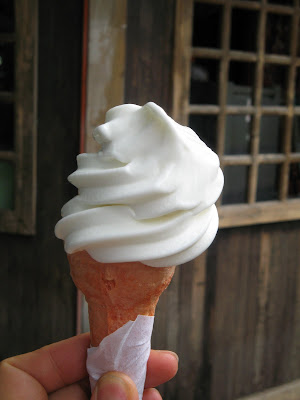 The only other flavor is ube, the color of which tells me it’s naturally flavored, though the mango ice cream I sampled was so bad I couldn’t finish a cup. Both retail for P20, while individual servings of refrigerated fresh milk in plastic drinking cups are sold for P25. 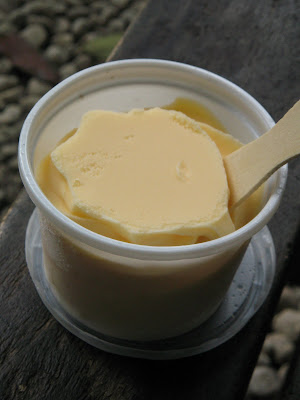 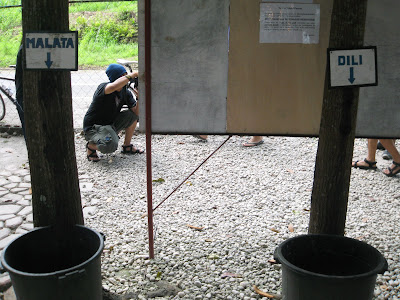 I understand malata is biodegradeable, while dili is Bisaya for "non-", or "not."

With a hyperactive bunch of guys on the road trip with me this was bound to be noticed, and it was fun to supply the missing word after the "dili," though of course we all dropped our plastic cups into the bin below it when it was time to go. 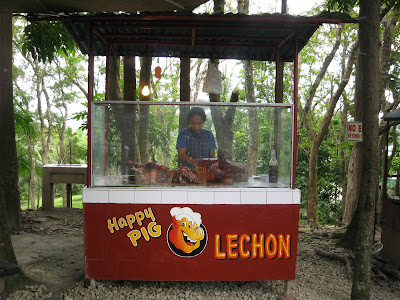 The smell coming from this lechon kiosk in the middle of the forest of molave trees, still inside the milk station, was so enticing that I almost bought a slice for myself, disregarding the chagrined look on my husband I was sure it would elicit.

But it was improper, more so inappropriate as we were travelling in a group, so I just focused on my vanilla cone.

But some people on bikes who dropped by preceded their bouts with ice cream or milk with chopped lechon and puso, so early in the morning. In retrospect – with the dismal lechon we would have afterwards - I should not have minded my manners and gone ahead and indulged. 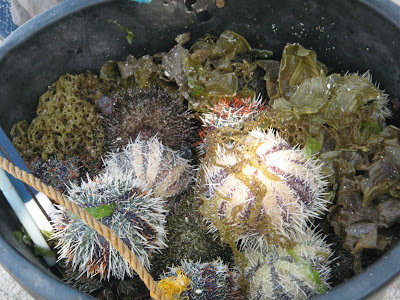 While snorkeling on the waters of Moalboal the next morning it didn't surprise me to note that not a single sea urchin was to be spotted among the corals. 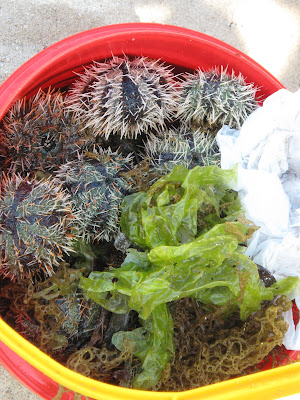 That's because by the beaches of Moalboal kids were selling freshly gathered suake (sea urchins). I was offered two full pails with a variety of seaweed for P150, but I remembered people in my husband’s line of work are not particularly enamored of exotic things, so I declined. 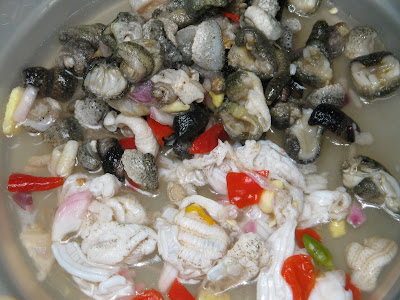 I instead opted for the kinilaw on offer, which had two kinds of sea cucumber. And which was an inspired decision, because the kinilaw was a perfect accompaniment to the lechon during lunch, foiling the richness with its cutting sourness. 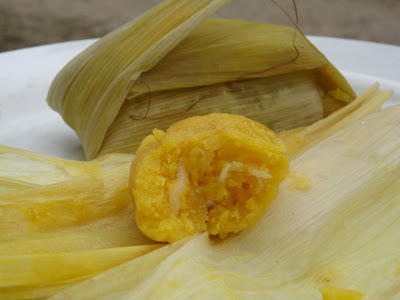 On the way back the next day, just as we were caught by a red light in Mandaue City, a street vendor knocked on our window to show these pintos, made in Talisay. At P70 for five pieces they weren’t cheap kakanin, but they were of the class of regional delicacies finely made that you get to eat only on occasions such as this.

Pintos are pounded yellow corn shaped into short rolls or pillows like suman, wrapped in corn husk and steamed. This particular pintos had shreds of buko in it, and was lightly sweetened. A similar kind of kakanin is found in the islands of Panay and Negros, called alopi mais.

And it was a fitting end to a countryside trip, which may not have been totally on the up side all the time, but on such trips it's not a bad idea not to have high expectations and pressure oneself, but just to take in and enjoy where the road leads you.

For a story on the origins of Molave Milk Station, click here
Posted by Kai at 7:46 PM

okay. that pushed me over the top. now i just have to go to cebu,take that road trip, stop by the same roadside food attractions, and stay overnight in moalboal for the sea urchins, seaweed, and kinilaw. outstanding write-up.