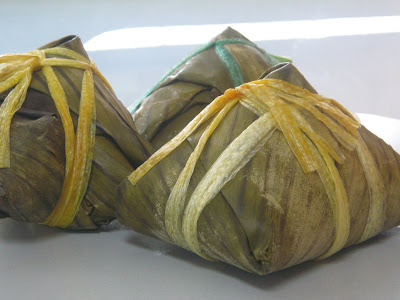 I am told this is a fine example of Southern Tagalog tamales. Tamales is a Filipino indigenization of the portable, wrapped food that originated in Mesoamerica (Aztec/Mayan/Incan civilizations) called tamal or tamale (plural tamales), which found its way to the country via the Spanish conquistadores.

I thought tamales was a regional delicacy in Pampanga, but Kapampangans affirmed there was a Southern Tagalog (ST) version. And I was surprised to find out that a good one is made right where I currently live. 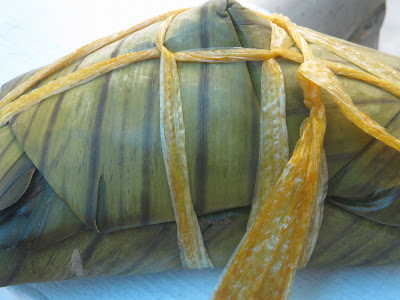 I found out about Robinson's tamales because a foodie-friend received a few pieces as a gift, and she promptly broadcasted to all her friends how good it was.

Robinson's tamales is made and sold at Elena's Food House, a small hometown restaurant with just a few tables. That Elena's is adjacent to the local Jollibee is testament to its good food - I haven't eaten anything there yet except for the tamales, but I'm hoping I'll get the chance soon.* 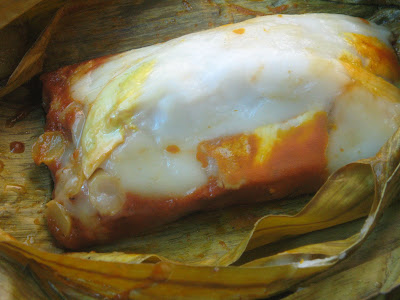 One distinct feature of Robinson's tamales is the wrapping - it is several layers so that it comes out thick and bulky, compared to the Kapampangan one which is flat. I can't say for certain, though, if this is a general feature of ST tamales because this is my first one. For all I know, it may just be styling by the makers.

But more distinguishing features become evident as the tamales is unwrapped. The first thing I think of is the absence of turmeric. As a child not used to luyang dilaw, I used to dislike the flavor, and it was one distinguishing taste I remembered from the Kapampangan tamales.

I first thought the reddish-orange layer at the bottom of the Kabitenyo tamales was dinilawan, but no, not a hint of the spice can be detected as I ate the tamales. People at Elena's confirmed that, yes, dilaw does not figure in Robinson's version.

The people at Elena's also told me one major distinguishing factor - gata was not used. I was a bit surprised, since most kakanin wrapped in banana leaves that I knew were stewed in coconut cream before they are steamed.

Then there is that reddish-orange bottom layer, which gives the tamales its signature flavor. It is nutty, meaty, a bit sweet, spicy from a lot of ground black pepper. It pools moistly beneath the tamales, so it is the last thing to arrive on the tongue, and becomes the dominant taste. Boiled halved garbanzos (chickpeas) provide crunch and enhances the nutty dimension.

Apart from these distinctive features, though, it is a tamales - with a savory filling. Slightly sweetened ground rice flour formed into a pillow, encasing slivers of pork and boiled egg. The soft rice dough fragrant from the steamed banana leaves, a palette showcasing the flavors of its filling and its nutty layer.

I like the flavor of turmeric now. But one thing I can say - I like ST tamales, even without the dilaw. 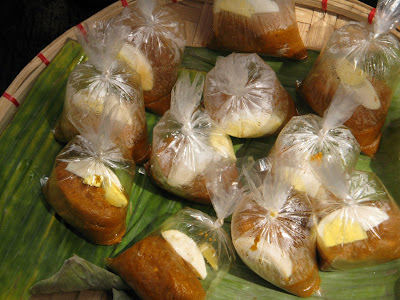 After I've had Robinson's tamales I was at the public market shopping for fresh fish, when I heard a vendor by the kakanin section shouting tamalis! tamalis! Upon closer inspection, the tamalis on sale were plastic bags of what looked like that reddish-orange layer of Robinson's tamales.

The vendor said tamalis was the only name she knew for what she was selling, and that it was a kind of spread, for bread. She said it was made of brown sugar, shredded chicken, coarse-ground peanuts and a slice of boiled egg.

I was quite intrigued, and promptly bought a bag, thinking I'd make some tamales out of it. But I forgot about it, and into the trash it went. But now that I know all the ingredients, I'm thinking of making tamales with everything from scratch. Soon, I hope.

While studying in Spain, I met several Spanish and Portuguese history profs who had cleared up much mixed (whether intentional or unintentional) ideas about Spain's "actual" influence on the countries that they colonized. --- Re: Tamales, it was introduced to Spaniard's via what is now considered, "Native American/Mexican Indian" opportunists and or slaves during the "triangle trade" (Vera Cruz > Spain < Manila). That is exactly how Chocolate ended up in Spain and how France got a hold of it. Oh, and do I have a great story for you re: Paella! That's for a whole other post though, but isn't it uncanny how Spainish cuisine doesn't incorporate "rice" in anything else BUT Paella? Hmmm...makes you wonder who really influenced who? There is a lot of things in Spain that are so very much influenced or stolen from the Philippines yet, it goes unsaid or unknown...even the most obvious i.e. the key to Spain's beloved "flamenco" dance itself the, "Manilla Shawl". That's right...even in Spain the name is overlooked and never examined.

---Anyhow, I love you blog. I just found it tonight and I'm reading every page! YES!

Hello, thanks for dropping a note. I hope you're enjoying the other posts.

Yes, it becomes quite difficult distinguishing who influenced who when it comes to food, especially if it is between a "developed" country and a "conquered" one.

What about ensaymada? I'd like to think it originated here, considering our passion for it. But then again it has flour, and butter, and cheese, all of which we don't produce locally. Oh well, but then there's paella. And bringhe....

My Lola Isay makes the best tamales which I so much miss now that she's gone. She was a student of Nora Daza then so her version best assumed to be leaning on the Kapampangan way. What I remember was rice flour was used, gata and the pastes were filled with chicken, pork (with fat)a slice of boiled egg, peanuts and maybe more. Now, i just have to be satisfied with Mexican tamales from those taco trucks when I drive to Seattle. I am hoping my aunt still remembers how to do this and learn from it. I guess it's time to visit PI. Thanks for this post. It brings back lovely memories.

Wow Manok you've had tamales from two colonies! I do hope your aunt remembers the recipe!