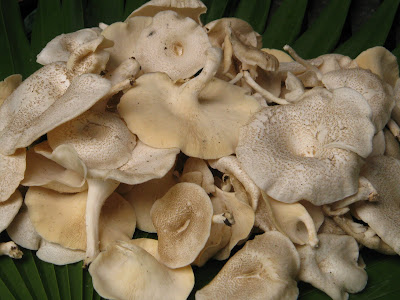 Finally we're having cold weather - I thought it was going to stay hot til Christmas. But the rains haven't let up yet - which is helping a lot in cooling the surroundings. Showers in the mornings, dark horizons at noon - they somewhat exacerbate my befuddlement at the darkening skies as early as 5PM.

The rains have been arriving daily since after Undas, so much so that I've found mushrooms at the market. Uhhh, yes, I had second, and third, and fourth, thoughts, but I bought the entire bilao of them. Just one vendor, and one bilao of mushrooms, and I made the vendor swear they were edible. They actually looked like those fungi growing on tree stumps and rotting driftwood.

The vendor said they were uong na kawayan, fungi mushrooming at the base of bamboo groves. 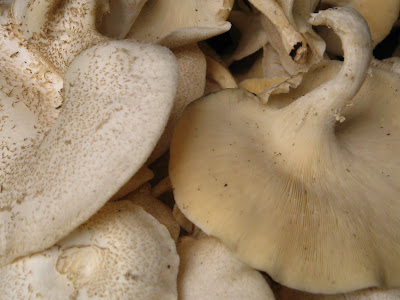 And yes they were, by the texture of them. They were thin as razor, but tough as hide. No matter what I did I couldn't rip a cap or make a tear in it.

So we had no choice but to eat lunch, and have the darned vegetables. But man, that soup was incredible. It had the flavor of beef and bones boiled for hours. Well, yeah, the soup was boiled for hours. We discarded the beef hide err the mushrooms and ate the green vegetables and finished the soup. It was a great one, without the cholesterol and the fatty lips. Perfect for the weather, too.

I remember my GrandMa frying the uong and tossing in garlic and onions. Water is poured until it boils and the veggies are tossed in. Finally, "sinagsagan na monamon ya inasin so sabaw to." Serve with rice while steaming hot. Heavenly delicious.
Best regards.

i remember this mushroom we call it "kulat-kulat" and yes it is makunat unlike the mushroom that is harvested near banana trunks/trees?
we walways cook it bulanglang style with unripe papaya, tomatoes and sometimes with dried dilis.

When was this?? cause it's only available seasonally. Im really interested!! man Mushroom lover here :)

With all the rains we've been having, and all those thunderstorms, I'm guessing the markets are sprouting a flood of mushrooms right now!