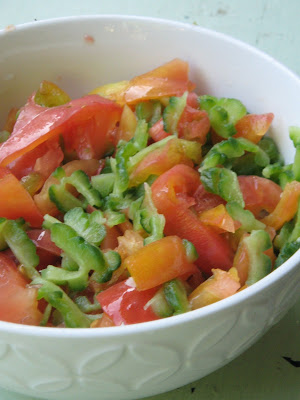 When it is cold and wet I crave for something salty. And because it's been raining every afternoon since Christmas, compounding the cold evenings, I remembered the tuyo - salted sun-dried fish - in the ref, and resolved to have it for breakfast.

We ate the fried salty fish with ampalaya salad. Raw ampalaya, halved lengthwise and deseeded, the inner white pith scraped away, then sliced thinly. Mixed with rock salt for a few minutes, then squeezed to remove the bitter juices.

The ampalaya is then put in a bowl of sliced native kamatis and doused with cane vinegar. The entire thing perfectly balanced the saltiness of the tuyo. It goaded one to eat a lot of rice, too, to drown the saltiness and bitterness. 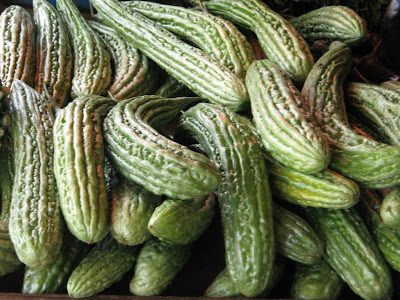 It is ampalaya season in Pangasinan now. Kaing upon kaing are offloaded in market sidewalks, and sold for just Php20 a kilo. That's three to four long pieces, or five medium-sized ones, which is more than enough to last a family for a week. 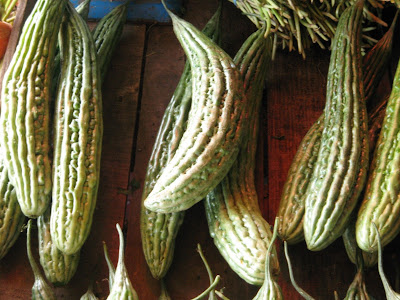 Ampalaya is a regular feature of our diet, from when I was still a child, because of its health benefits and my family's predisposition to diabetes. So eating ampalaya was but a natural inclination for me, although I think that's true for a lot of Pangasinense children, at least in my time.

The region's cuisine has bitterness as a prominent accent, be it from vegetables or meats. So that I know that the author of the children's folk song bahay kubo is not from Region I. In fact, what is known as the Ilokano parya - the 2-3-inch dark green ones with peaked ridges very close together - is reputed to be the bitterest of their kind - ampai-pait. Conversely, the "albino" ones, with shallow ridges, are supposed to be not bitter at all. 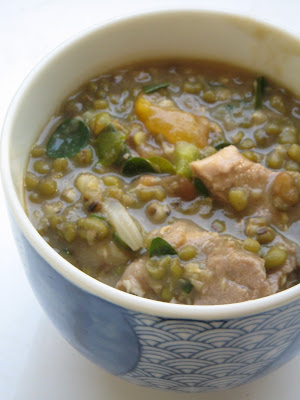 I can't speak for the younger generation these days, but since my kids eat what we have on the table, they have grown to tolerate ampalaya. My older daughter, who never ceases to amaze me when it comes to food, even likes it. We have it sauteed with tomatoes then folded in beaten eggs. Or with crab meat. We mix it with balatong or monggo, also sauteed with tomatoes and fortified with malunggay leaves.

They say an ampalaya's bitterness depends on the cook. Aga makaluto, kwan da. Although I think it's just a matter of technique, like employing the mentioned salting prior to cooking. But for me, who has SM tendencies, where's the fun in eating something bitter when it isn't bitter at all?

But cooking prowess aside, it is said that an ampalaya is best eaten raw. Raw and just sliced, not immersed in salt with the juices squeezed out. It is in the bitter juices where the almost miraculous powers are. Heals and empowers the pancreas and the liver. It is also an accepted folk remedy in my province for hypertension. It is said to strengthen and enhance production of red blood cells.

So it might be bitter to eat and swallow, but there's nothing bitter in looking forward to enjoying life for a long time yet.

Related Posts
Amapalaya con Kani
Posted by Kai at 10:41 AM

i have some tuyo, ya lalaniran, tomorrow i intend to sentence it - sintensyahan na, with newly bought ampalaya and tomatoes.

do you have a good recipe for monggo with ampalaya? thanks

Marilou, no recipe. Just boil a cup of monggo in a pan of water (about 2 liters) until soft (about an hour). While the monggo is cooking, deseed and slice thinly an ampalaya. Put into the pan when the beans have softened and let cook, and season with salt to taste. Turn off heat.

Peel and crush a head of garlic, and slice an onion and three large tomatoes. Heat oil in a frying pan, saute the garlic until golden, then mix the sliced onion. when the onion has turned translucent add the tomatoes and stir. Let cook until the tomatoes are almost melting. Then mix everything into the pot of cooked monggo and stir well to incorporate.

This is the basic way to cook monggo. We like to add a thumb of peeled ginger at the start of the cooking of the beans, then malunggay leaves together with the ampalaya.

Pork or chicken is good with the monggo for a one-pot dish. Put the meat mid-way through the cooking monggo.

We also like to add a piece of grilled fish, preferably bangus head, at the end of the cooking process (together with the ampalaya) when not using meat and we have left-over inihaw. Left-over roasted chicken or grilled pork is also good to add towards the end. Some people put in chicharon.

Don't cook monggo at night - it may induce constipation or stomachache. Consume it in the daytime, and make sure to cook the beans well (the beans should be very soft).