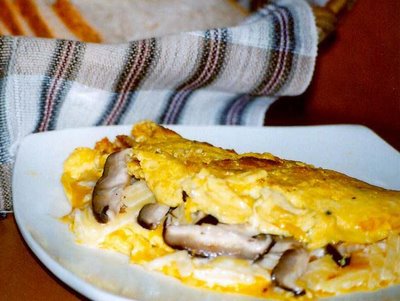 Cafe By the Ruins, my most beloved Baguio restaurant, calls this simply vegetable omelet. It is a simple enough omelet - tender slices of blanched shiitake mushrooms and julienned boiled potatoes moistened by a little mayonnaise and some melted cheese, lovingly enclosed by perfectly scrambled eggs.
But it is nowhere near light. Paired with the restaurant's freshly-baked, fiber-rich kamote (sweet potato) bread or English muffins or cinnamon rolls (in photo are some slices of Good Shepherd Marian loaf), and, just to be indulgent, a cup of hot tsokolate, it makes for a heavy breakfast fare that could sustain you through uphill walks in and around the city. 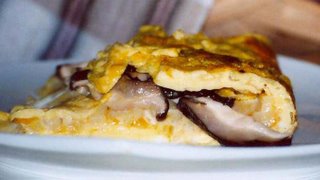 It is one of my three favorite dishes the restaurant serves year-round that contain shiitake mushrooms (the other two being a delicious shrimp-sotanghon soup and forest stream soup), although they are seriously impaired when fresh shiitake mushrooms are not available in the Cordilleras (they never use dried shiitake). So I only order these three when it's shiitake season, which is right about just now, or cook some when I can't go to Baguio.
But Cafe By the Ruins is not only about the fresh shiitake, available or not. It has a host of many other inspired dishes not found in other eating holes in the city, and elsewhere in the country. And comfort food dishes done with admirable and palate-gratifying aplomb, sometimes infused with delicious quirks and twists. Before they were introduced in Metro Manila restaurants, lemongrass iced tea and fish roe topped creamy pasta (the fish roe in cream also doubling as a dip for the excellent breads) have long been favorites at the highland cafe.
Cafe By the Ruins is the only purveyor I know of the slow food and slow cooking philosophies in the country, though I don't think it does so consciously. The menu was constructed around what ingredients are available in the Cordilleras, and what can be grown in the small plot beside the restaurant. Daily specials feature what's in season, with an option for a full vegetarian meal. A lot of the dishes allow for minimal or no cooking, and highlight the fresh vegetables and fruits of the region. Of course, dishes from around the area make an appearance here, so there's pinikpikan and bangus and longganiza, and basi and hot tapuey.
In short, everything is in context, and, needless to say, healthy. Smoking in the premises is not allowed, and no softdrinks and alcoholic beverages is served, except for wines and the local basi and tapuey. Rice is the red variety grown in the highlands. The cafe building itself uses local materials, and displays artworks from the artist-owners. No plastic tables and chairs - northern Luzon is not known for wood furniture for nothing. Even the comfort rooms sport organic deodorizer - no albatross discs anywhere, but an engagingly sweet scent exudes from a bunch of dalia flowers, freshening up one's psyche.
It's paradise a few levels below heaven.

Shiitake mushroom is one of my favorite and I never thought of combining them with eggs and make an omelet-this looks divine and I'm sure it's delicious. Thanks for sharing the idea of cooking shiitake and potato omelet...

I'm fine, Tin, thanks. I love mushrooms and it is a thrill to cook and eat the different varieties, coming up with varied dishes for each. Regards to you and yours!

hmm, warm memories of cafe by the ruins and our food sojourns. remember how we eat at different restos for all our meals and wish its not only three but five or more even when our stomachs are bursting. i hope their forest stream soup is still in the menu. i kind of miss baguio suddenly. must pay homage sometime.

Hi
The slow food philosophy is absolutely deliberate as is the idea of concentrating on the fresh food in the market! This is the work of founding chef, Adelaida Lim!