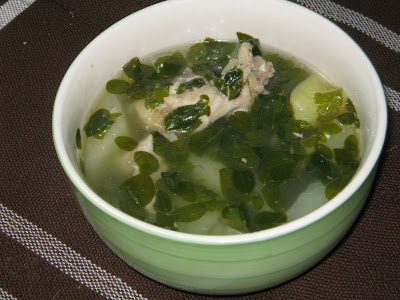 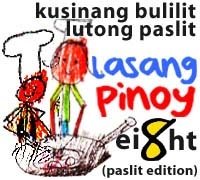 wow tinola! nyam! this too is one of my mom's pamana..hehe..love her tinola so...likewise my kids too love mine!:)

i want a big bowl now!!! hi kai, i am nursing a cold and sore throat for a week now. so i really need that, ahhh miss ko na ito. we always cook free range chicken too, i especially like the atay and balun-balunan and drumstick. thanks for bringing me home

hi kai that's my comment above its me alilay

hi kai! reading your blog always bring me back to my own experiences including childhood memories... this time you brought me back to "bahay-bahayan" with my sisters, brothers and cousins. we also had those small cooking wares made of clay from palayok to kawali and laddles. i remember playing youngest son to the make-believe family of so many children. our eldest cousin was the mother and, hence, the one in-charge of the kitchen... one time, we all gathered around the litle kitchen of a make shift play house and watched her cooked biko, known locally in our place as "sinukmani." i don't know why, but it seemed the best biko i ever tasted in my life.

Wow! I can imagine how tasty your tinola is! :) I will have to hunt down some native chickens of my own!

Oh I had those clay cooking set as well when I was young. Me and my playmates even tried frying real food in it. I couldn't remember if they were edible though. LOL !

Tinola - my very comforting food...I tried the native chicken Tinola long time ago and I’ve got a little sore over my jaw but it’s delicious and taste is really quite different than the commercial chicken but for now I will have to stick to the one we have available in the supermarket and once I get back home, I will definitely ask my family for a native chicken Tinola ready…

Thanks for sharing as part of your LP 8 entry!

With all your wonderful posts especially about food like pinakbet, papaitan and this tinolang native na manok, I couldn't believe you weren't into cooking as a kid.


Thank you for sharing your story for LP8! and I also wish I would be able to taste this tinola in the near future….

hmmm. tinola, one of my fave. how much more if the main ingredient is native chicken. sarap nyan!!!

native chickens are the best, even the eggs!!! another treat that i miss. the organic free-range chickens here are yummier than conventional, but there's still something about pinoy chickens:)

Hi Kai, this is a wonderful story. Maybe your kids can read this in future and write about how they played with the palayok when they grow up too. Very lovely. The tinola sounds so gooood. I remember vaguely the taste of the real native chicken. Here we have nothing but battery chicken.

tinola! we used to have that for sundays but then I hated native chicken because it takes forever to soften and be edible enough to munch. our version have papaya and dahong sili. our market then in daet only sells native chicken. now that its all tasteless chicken galore in the market, i suddenly hunker for dear old gamey chicken. My, how times have changed!

I love native chicken, too especially in sinampalukan. Worth it ang paghihintay sa tagal ng pagluluto.

I love chicken Tinola, i make them myself, only thing is im a japanese, caucasian hawaii born mom/wife, My spouse is hawaiian mix nationality, I LOVE ALLLL of the phillipine foods, especially the fried silet!! YUUUMMM!!!

AWESOME DISH that chicken Tinola, very healthy and wonderful help for your body when you catch one flu or cold!!