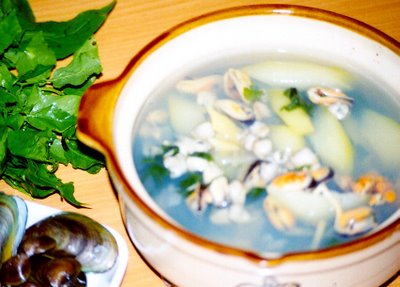 I understand that the term tinola in Metro Manila, and probably in other parts of the country, as well, is sauteed chicken in gingered soup with sayote (chayote, sechium edule) tuber and sili (bird's eye chili) leaves. So I'm calling this soup tinola, since it's basically tinola, only with steamed tahong and halaan out of their shells and not chicken.
The cleaned (washed and trimmed) mussels and clams are boiled in a pan of water with a piece of ginger that was peeled and whacked by a wooden ladle (I'm trying to say pinitpit, but how do you say that in English? It sounds like pinalo to me). Crushed ginger, maybe, but only with a single whack, or else the soup will be too fiery hot.
When the shells have opened, take them out of the pan, let cool for a while, then pick out the meat from all opened shells. Put back the meat into the pan, discarding the empty shells and all unopened ones. The mussel and clam meat are usually sauteed in minced garlic and onions prior to putting them back into the soup, but I skip this to reduce on cooking oil intake.
Bring the soup back to a boil, then add sliced sayote tubers, adding in the sili leaves, and maybe a couple of green sili (siling pansigang), when the sayote has turned a bit transparent. Season with salt and ground pepper to taste.
This is a very tasty soup, not quite a tinola (no chicken flavor) and not quite a clam/mussel soup because of the sweetish presence of the vegetables, but with all the ingredients so comfortable together that they seem to think they were made for one another. Mind-clearing, clean-tasting soup despite the cloudy appearance, flavorful chewy mussels, succulent sayote slices and the bitter-green notes of the sili leaves, all providing varying textures and flavor contrasts.
It's a low-calorie, low-fat, nutrient laden dish. Perfect for Lent, but nonetheless a delicious and easy soup to make any time of the year, since all the ingredients are perenially available, and costs almost nothing. I could eat an entire bowlful of this on a hot day.
I learned to make this from a friend who grew up in Cavite. I have to note, though, that I forgot to ask what they call it there where the mussels come from, and that I'm calling it tinola because I know tinola is a clear, gingery soup with chicken, or, if preceded by a qualifier, with whatever is referred to by the qualifier, like fish tinola, which doesn’t contain chicken, and is called pesa in Tagalog. Although in Pangasinan we do not have beef tinola or pork tinola, but instead we have laúya, both referring to pork (nilagang baboy) and beef (nilagang baka).
All of these are clear soups flavored with ginger, usually with green leafy vegetables and a starchy root crop, the kind of vegetables added varying and depends on the kind of meat used. Both the dark-leafed, native (meaning indigenous to the Philippine islands) pechay (bok choi, pak choy) and marunggay (moringa oleifera) are favored leafy accompaniments (not together, though, either one or the other) for all kinds of meat, including fish. In their absence cabbage is for beef, Chinese/Baguio pechay is for pork, or green beans for both.
To up the vegetable content, sliced green, unripe apayas (papaya) are also added to the soup, regardless of what else is in it. Potatoes and carrots are also added, and so the meat/fish becomes only one of the ingredients instead of the star attraction. But we stop at that, and never add seba, saba bananas because a sweetish hint is virtually unknown, and frowned upon, in Pangasinan savory dishes. And so chicken tinola does not contain sayote and sili leaves for Pangasinenses, but is a gingery soup chockfull of vegetables enhanced by garlic, whole peppercorns and salt, or patis, or sometimes the salted fish paste bagoong.

Yum and I think that's the easiest way to eat Clams and Mussels out of their shells-lol!

In English cooking term of "Pinitpit" is either "smash or crushing it." Thanks for sharing your wonderful dish...

kai napalo ang luya
will the word CRUSH help?
marami clam at mussels dito but have not thought of cooking this way
though I always seem to add ginger on my mussels

Thanks for the help, Tin, was having a good laugh at whacked.

Hello, there, Sha, how was Germany? Looking forward to some great photos from where you were.

I know that tahong/halaan tinola! Not that we call it that way although I really don't know how my mom calls it. That's how she cooks halaan most of the time. In fact, the only way aside from burong halaan. The only difference is that she never takes out the meat from the shell. No frying involved, too. As in nilaga na may ginger at dahon ng sili w/ sayote din! My mom is from Batangas which is very near Cavite…

hi, kai, we have not been introduced, this is kc. I missed home
especiall when browsed your blog, Halaan Tinola, Sarap!