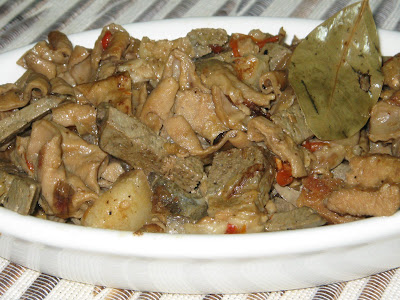 
Fiesta was not given much weight in our house. Let me add that I think it was given the same treatment elsewhere in poblacion, where our house was located. This is probably because there was not much community spirit, relative to the barrios.

We celebrated fiestas by joining the parade, or watching it, and attending the nightly baile in the town auditorium, again either as spectators or as active participants to the dances. But participation is rare – it was more fun to watch the politicians, those who wielded influence in the town, and the wealthy, cavort to the beat of the chacha or the tango as dished out by two live “orchestras.” Nowadays probably these are interspersed with Itaktak Mo. Midnight marks the end of the baile and the beginning of the annual beauty pageant.

Fiestas are also the time for the archbishop to confirm Catholic baptisms. Which gives more reason for a cooking frenzy, though confirmations are not celebrated as much as baptisms are.

We kids in the house having been confirmed right after our baptisms, our mom didn’t see any reason to be on a fiesta mood during fiestas. She just prepared some, for those who got tired and hungry after the rides in the plaza, or for those who wanted to join the dance and watch the beauty contest. But we didn’t receive that many visitors, anyway.

But both my parents grew up in the barrios, and my mom never missed a fiesta in Don Pedro, sometimes to the chagrin of my dad. It was the opportunity for her to catch up on the lives of her relatives. I always tagged along, until I was old enough to join the dances held on empty lots with dirt-packed floors. But that was not the reason I asked my mom to take me.

It was because my uncles cooked the best igado. My uncles’ take on meat dishes during big celebrations have become my standards. My uncles have always been the better cook as long as I can remember. Anyway, killing a pig and cooking the different parts into different dishes requires bayanihan – involving several families, which we did not have in the poblacion.

I have attended fiestas in different parts of the country, and in all of them it always involved a pig slaughter. This is actually practical, because with a whole pig a family can feed visitors for days, especially those with visiting big clans.

Various dishes can be created from a single pig, utilizing all the parts – the meat for embutido (ground pork meat roll), the belly and tail for adobo (vinegar stew) and giniling (sauteed ground pork), other fatty parts and liver for menudo (diced meat and liver in tomato sauce), the head for dinakdakan (grilled ears and snout mixed with pig brains), the thighs and legs for crispy pata, the lungs and heart for bopis (lung stew), the internal organs for igado, etc.

For me, these dishes may look different, and are called differently, but they taste all the same. Except for the igado. What sets the igado apart is the flavor imparted by the internal organs – the altey (liver), the pait (intestines), the kidney, all stewed together in vinegar with laurel and peppercorns. Very little or no meat flesh at all is included in the dish, which somehow makes the igado taste not as porky a dish as the others. The distinctive vinegar taste also sets the dish apart further. It is not makatama, or nakakaumay.

I have also been fascinated by the preparation of this dish. Not the cooking itself, but the cleaning of the organs after the slaughter. The long, long pig intestines are turned inside out – binaliktad – to wash out its contents, cupping and pressing with your hands the inside lining and running them from one end to another several times, frequently dousing with hot water. I can’t remember if my uncles used soap, but maybe I don’t need to know.

Then at dawn, the barrio is awakened, not by the tolling of chapel bells, but by the constant hammering of bolos and knives on thick wooden planks, chopping the ingredients of the day’s porky meals.

I’ve mentioned before that I don’t eat pork on a regular basis, and try to avoid it if possible. There are only two exceptions to this – when the pork is cooked with pancit, and if it is igado.

I live far away from my uncles now, and going home during fiestas has become impossible. I’ve searched far and wide for the dish that best approximates my uncles’ igado. For a time I lived in La Union where my husband used to work, but I was disappointed to find out that igado in that Ilocano province is cooked with tomato sauce.

It’s ironic, but the only igado that surpassed my uncles’ is one that was cooked by Tito Don Manuel, an Ilocano expat then living in Jerusalem. I was with friends – we were mostly just kids then – and it was the first foreign travel for most. Tito Don prepared a Filipino fiesta for us. Perhaps the poignancy of the moment added to the memory of that gathering. The aroma of vinegar, soy sauce, laurel, pepper and pork liver perfectly blending in the stew, and the smell of pandan-infused steamed rice – they sustained me during the 1 ½ months I was out of the country, away from my family and all things familiar and comforting.

And here is my igado, the version of an uprooted Pangasinense who cannot attend fiestas at home.

So glad you're back...you were my Pangasinan food connection!

Hi, Marilou, I missed writing, I have stocked up on many things Pangasinan!

Please join Pangasinan wikipedia at http://pag.wikipedia.org . We believe that you will make the wiki a lot better. You can contribute articles on Pangasinan food. Thanks and more power.

Its good you are back. Its amazing that filipinos are deeply into utilizing every part of a carcas of meat, great information here and looks really good.

hey kai! welcome back and thank you for joining lasang pinoy 19 . . .

igado has been one of my favourite fiesta food in the province and i remember it being cooked al-fresco in large kawas at our backyard along with other dishes like dinuguan, papaitan, etc . . .

Hallo, Manong Mike, thanks for dropping by. Yes, a large kawa cooking in the backyard is an indelible part of fiesta memories for me, too. Lots of firewood requirements!

Hello Kai, thank you for this Igado recipe, this will finally end the debate with my wife who keeps insisting that bopis is igado.
Still have no recipe on Menudencia? On your trips to Dagupan, check out Dagupena restaurant, I don't know if they are still around. It was the last time I had a bowl of it ages ago and still leaves me with lingering feelings of happy times.
Excellent writing on your blog. You must turn this into a cookbook. All the best to you.

Flipster, Dagupena is still around, but they've transferred to a new site in Calasiao, along the national highway going to Sta. Barbara and on to Manila. I haven't checked it out yet, but I'll be sure to put up a report once I do.
It's actually easy to mistake bopis for igado and vice versa, since they actually look and almost taste the same!

Cooking igado, Abra style is minus the intestines and the kidneys. You can add the heart and some meat, but use the tenderloin (lomo) part. It is cooked with (lots) of garlic, some peppercorn or freshly ground, vinegar, salt and a little fish sauce (patis to bring out the savory aroma combined with the garlic), minus the soy sauce and laurel leaf. Not so much of color though (that's why the use of soy sauce as you said), looks so pale actually, coz the soy sauce will likely change the somewhat sweet taste of the liver. This way, it cant be mistaken with bopis, just cook the intestines into dinuguan or bopis. Btw, use only cane vinegar (sukang iloko) or the del monte brand, mumurahing suka/sukang puti will not bring out the best aroma and taste of igado. Marinade first the liver and meat with crushed garlic, salt, pepper and vinegar. Leave some garlic to saute with the meat. Totally no onions please.

Abra igado sounds so different! I can't imagine igado without onions, but I'd like to try it because I don't particularly like them! And I totally agree with using natural vinegar - I actually stopped buying the white bottled commercial vinegar long ago and now rely on naturally fermented vinegars sold along the roadside in the provinces.