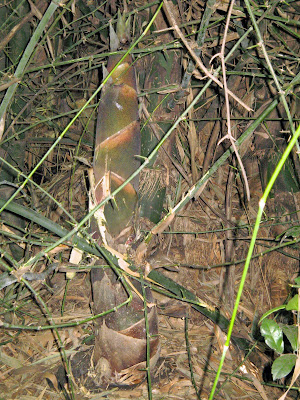 A city dweller once visited a friend in the barrios. As his visit extended into the late afternoon, he was prevailed upon by his friend to stay and eat supper in the house with the family, promising him a special treat.

The city dweller gingerly followed his friend into the kitchen doubling as the dining room, noticing the missing rows in the bamboo slat flooring. And indeed what a treat supper was! He was served something he had never tasted before, but he liked it so much instantly that he had a second, nay a third, even a fourth, helping.

After the meal he had to ask his friend what it was. His friend obligingly told him that what they had was bamboo.

After a few months the city dweller was again due for a visit to the barrios. This time he was a bit distraught, exclaiming, "My friend, I have never forgotten what you served me in your house. Its taste haunted me that as soon as I got home I asked my kusinero to procure bamboo and cook it for our next meal.

"My friend," came the answer, "which part of the bamboo did your kusinero cook?"

"Why, I suppose the same part that you used in your bamboo slat floor."

"Oh no, that's why you had a hard time! We don't eat our floor slats, it's the young shoots of the bamboo that we cook!"

- Translated from the Pangasinan language version as narrated by my father

Labong is highly seasonal, because it is not cultivated. We wait for the shoots to reach up above ground, usually in a tangle of spiny bamboo twigs in and around bamboo groves. It is tricky to get, requiring several slashes from a sharp, heavy bolo, and arms well protected to avoid bloody scratches.

Like all living things, bamboo shoots grow and thrive during the rainy season, although a grove by a creek or a river bank may bring forth shoots year-round. The Chinese can the labong for constant, steady supply, but there is nothing like the taste of fresh, newly-harvested labong. It's incomparable, indescribable - green, woody, earthy, all at the same time, speaking of where it came from and what it shall become. 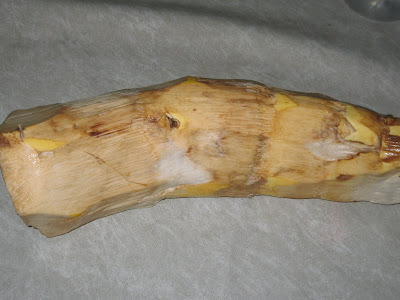 Once harvested, the shoot is stripped off its outer covering. The labong already looks like a bamboo, or a naked sugar cane perhaps, though conical in shape. It is thick and dense, the hole in the middle still very narrow. In this state it can keep for a few days in a cool, dry place. 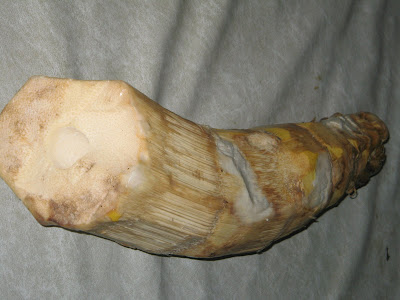 The labong is julienned - the thinner the better - so it is ready to cook. It can be pre-boiled before-hand (turning yellow) and kept in the refrigerator so it can last a little longer. But if there's an immediate need and a big one - requiring the entire shoot - it can be cooked straight from the harvest. The latter will make the labong turn pasty in hue.

How labong is commonly cooked in Pangasinan
Labong in Cagayan Valley
Posted by Kai at 2:20 PM

Wow, in Pangasinan you'd be talking about two entirely different vegetable dishes now - that's saluyot and labong, and pakbet with saluyot. I've never had pakbet with labong, but you gave me a new idea. And you had me craving for mushrooms which literally mushroom after a thunderstorm. Best with papaya and sitaw!