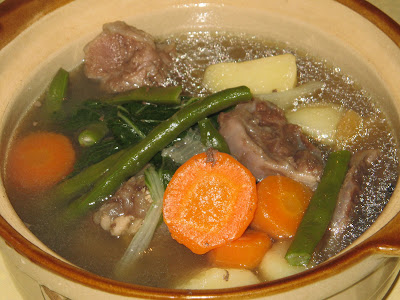 Lauya is the Pangasinan equivalent of the Tagalog nilagang baka, or perhaps bulalo with vegetables added, although the vegetables involved are a bit different. Owing to the Pangasinense partiality for saltiness in viands and anything eaten during a meal - the land is not called "the place where salt is made" for nothing - sweetness or any hint thereof is relegated to food eaten after a meal - dessert, or in-between meals - merienda.

And so lauya is more akin to bulalo, in that beef - the bones, the tougher cuts like shank/brisket and round, or the parts marbled with collagen like chuck - is boiled for hours until fork-tender, with only onions and whole peppercorns added. The long hours of cooking - even just an hour in a pressure cooker - renders the soup intensely flavorsome that little else is needed. Like bulalo, lauya is served with patis, kalamansi halves and finger chilies on the side for the diner to mix to suit individual tastes.

Lauya, though, like nilaga, can be considered a meal in itself because apart from the invigorating and revitalizing soup and the protein from the meat, vegetables are mixed in when the meat is done for added nutrients. What's added is what can be found in the province or in the nearby environs - native pechay from the backyard plots, and vegetables from Baguio City/Benguet province - potatoes, carrots, long green beans (commonly known as Baguio beans), onion stalks. When native pechay is not in season cabbage from Baguio is a good substitute.

But no boiled saba or halved ears of corn like in nilaga - the sweet hints will not be welcome.

I have heard that lauya is also the term used for exactly the same dish - comprising exactly the same ingredients - in some parts of Mindanao. I don't know who influenced who, but I gather the highlands in Mindanao produce the vegetables that are considered essential to the dish.

The long boiling hours melt the beef fat, the collagen, the bone marrow and what-have-you, thickening the soup a bit. Lauya should be eaten smoking hot, and fast, to prevent the cooling fat from forming on your lips. The soup alone is seriously artery-clogging that it is not a good proposition to cook lauya during the hot months. It is heavy enough, and you run the risk of developing a heart attack, swiftly.

It has been incredibly cool these past few days, though. I'm not sure if this is the temporary result of the convergence of three typhoons so late in the year in the country, but I'd like to believe the weather forecasters saying the cold is brought by hanging amihan coming down from the North. I hope it lasts, ushering in a cold Christmas season so extremely opposite from last year's. For I'm just starting to enjoy my lauya.
Related Posts
Uong na Pungol
Pinaupong Manok sa Sabaw
Tinolang Native na Manok
Tahong-Halaan Tinola
Posted by Kai at 5:03 PM

In Taytay, Rizal where I live, lauya is much like nilaga except that you drop in some cinnamon bark (sangkit) while tenderizing the beef. I use McCormick cinnamon when I forget to buy sangkit at the market. My kids love it.

yes, in taytay we cook it differently by adding sangkit which makes it more delicious and aromatic.

That's intriguing, nilaga with sangkit. I've eaten beef, cooked without soup but just stir-fried with a thick sauce, flavored with star anise. It was a Chinese dish and I loved the aroma. Never with sangkit. Thanks for that info, I'll try it!

Thanks, I didn't know it's called the same in Ilokano.

Hi Mandyandy, is that lauya from Rizal, too? I know Tagalogs like their soup sweetish, so I've come across nilaga with corn, or with saging saba specifically for that purpose. This is the first time I've heard about adding brown sugar, which is pretty straighforward, though I have probably eaten it without being aware of it.

Yes ! Specifically from taytay , rizal..that is our version of lauya with star anise(sangka) and red sugar to taste sweet. I learned it from my family. I am native rizalenos my parents are both from taytay.

Very intriguing. No saba, though, in your lauya? Or corn?

In taytay Rizal, they also add plantain(saba) sugar and the rest mentioned. Yummy