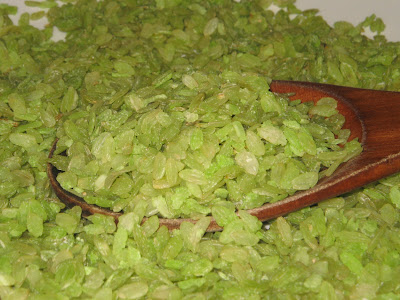 I got feedback from some of those who were able to watch the Undas episode of the television lifestyle show The Sweetlife, where I cooked the Pangasinan Undas rice delicacy inlubi, about a similar rice concoction that's also associated with the season.

Pinipig, young glutinous rice harvested prematurely, thus retaining its green color but comes out flat due to pounding (a process identical to the one undergone by deremen, without the burning stage) is a seasonal delicacy in the central plains of Luzon. I got feedback specifically from the provinces of Bulacan and Pampanga, where pinipig is harvested and eaten during Undas until the end of the year. 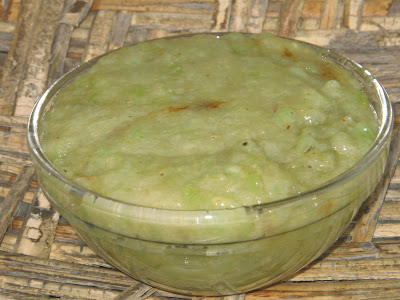 I was intrigued by this pinipig, because the only pinipig I know in my part of the country is the toasted rice kernels, crunchy like pop rice, white-to-beige in color and mixed in halo-halo. In Pampanga I heard that pinipig is eaten by the lolas as kutkutin or tsitsirya/chichirya. It is also made into biko and suman. 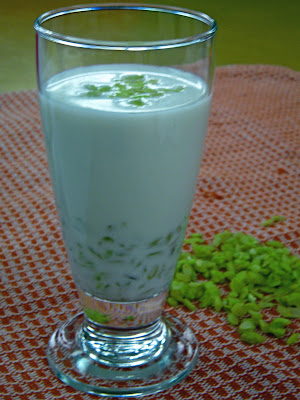 In Bulacan it is mixed with kakang gata (coconut cream), in some parts as thickener to the gata and drunk as juice, in some parts eaten with the consistency of champorado or oatmeal/porridge. The choice sweetener is slices of chico, which comes in season also from Undas onwards, and/or langka (jackfruit). Whatever is left over is cooked because it spoils easily.

It is also cooked in Bulacan into puto and pinipig bar.

I had the luck of being gifted with several kilos of sweet-smelling fresh pinipig from Bulacan, and of course I had to try the uncooked ginataang pinipig. Ginataang pinipig is a novelty for me, and I was warned that my stomach may not be agreeable to the raw gata. You have to grow up eating uncooked gata to develop the tolerance for it, I guess. For young Bulakenyos the gata is heated to avoid stomach trouble.

For my first taste of ginataang pinipig I used pure coconut cream - grated coconut machine-pressed without water, so that it comes out thick and lusciously creamy.

This snack is heavenly when drunk/eaten cold. You are hit by the creaminess of the gata, and then you crunch on the soft, fragrant pinipig and the sweet chico and langka to munch on.

Other variations include adding buco strips, and sugar if the chico/langka is not enough for one's sweet tooth.

Very simple and straightforward, just like any Filipino kakanin or rice delicacy. Yet there is complexity of tastes and flavors, representing what's in season.

Lasang Pinoy 22 for December, with the theme Rice to the Challenge is hosted by JMom over at Cooked from the Heart.

Wow! I almost forgotten fresh green pinipig, your photo of pinipig look so fresh and I bet they smell heavenly as well. Thanks for posting native food delicacy it’s certainly bring back our childhood food memories.

They smelled like nothing in this world, ut-man, really so heavenly. The donor wrapped them in banana leaves before wrapping them in newspaper and then again in plastic, so they got to me real fresh.

Hi Kai, we had 'green rice', as the girls call it, last year while we were in the Philippines. They loved it! Now I wish I had bought some uncooked to bring home with us :(

great entry for LP, Kai! Thanks.

wow, i never knew there was such a thing as green pinipig. thanks for this very informative post!

this is duman in Pampanga! i enjoy eating this with gatas ng kalabaw in the morning. i let it soak in the ref and have it as merienda. haaay... i wanna have some for the weekend.

this is beautiful. brings back childhood memories when we'd spend summers in bulacan. the smell of pinipig is awesome and with gata, it's just perfect.
great entries to LP!

You can also add sago or gulaman to the gata and pinipig and crushed ice...