I am not going to rant about the milk contamintation in China. My outrage about that atrocity is beyond words.

And the anger I feel cripples me. I am angered by the fact that I have to work, alongside my husband, to be able to raise my family in the manner I want, leaving my babies subsisting on monstrously transformed milk, instead of nursing them the way God - or our evolution - intended.

Writing about it is useless. Because I want China out of business. But that is never going to happen. Ever since it started manufacturing for the whole world atrocities have come, one after the other. But all we've had were - are, will be - recalls, because, at the end of the day, business doesn't care. The main point is the bottom line, and as long as China employs slave labor, the better it is for business worldwide.

What I want to focus my energy on, instead, is a related issue, but closer to home.

I had expressly forbidden instant noodles to be cooked and eaten at home. Even the househelp cannot cook instant noodles for themselves as long as the kids are around. If you are a parent who safeguards the health and well-being of your children, or someone who is conscious of what he eats, I'm sure you know why.

About a few months ago Monde Nissin debuted an ad on television for their instant noodles line, with no less than who is called the megastar of Philippine movies (and TV ads) saying this opening line -

Bawal magsinungaling. Hindi masama ang noodles.
(It is forbidden to lie. Noodles is not bad for you. Or something to that effect. Conspicuously, though, that ad line is missing from their website.)

To say that I was irked is an understatement. A few days after, my five-year old son pointed out the ad to me, and inside my mind I was screaming. How do you explain to a child what magsinungaling is? And why, why, is she saying noodles is not bad for you?

Outwardly I was calm, and reminded him in return that you do not believe everything you see and hear on television.

This is actually a difficult position to take, because we let the kids watch documentaries, National Geographic, Animal Planet. I hope they acquire the ability to distinguish which is true from what is false as they grow up.

I was willing to let it go at that. But I am writing this now because we went home to Pangasinan recently, and there I saw, in colored, blown up tarpaulin posters hanging on the fence of every public elementary school we passed by as we traveled around the province and La Union plus Baguio City, the megastar Sharon Cuneta in a pictorial progression of the poses of the three wise monkeys (see no evil, hear no evil, speak no evil). 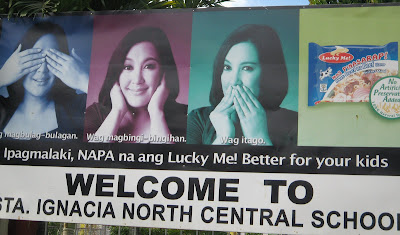 {monkey acts}
Cuneta may have just seen the ad as monkey acts. But she is the wife of a senator (not that senators are highly respected, anyway). She knows her influence in the country. And she has enough advertising contracts - all big ticket acounts - plus the kickbacks her husband receives that she can afford to choose the products she endorses.

Or maybe I overestimated her. Maybe she's soul-less.

What does instant noodles contain?

Just check the labels. It's just sodium (that's salt for you), some carbohydrates, which are reputedly coated in wax that's not digestible. The effects are potentially harmful if that's what all kids eat, with nothing nutritionally substantive to counteract it.

Compare that with two bunches of kamote tops, simply boiled, at Php10. It has long been considered poor man's fare, but it is so rich in nutrients, and organically grown, sodium-free, available everywhere, anytime. It is not genetically modified, not chemically processed, with no saturated fats. Eaten with steamed rice it is filling and substantive, fully loaded with fiber.

And so is the case with kangkong tops (swamp cabbage), or okra, or a slice of kalabasa (squash). Or even a cup of clams. All for the same price of two packs of instant noodles, maybe even cheaper. Even free, because these can be grown, easily and at minimal or no cost at all, in backyards.

We are not a poor nation. We choose to be poor. We are endowed with resources we don't give a second glance to. And we let people like Sharon Cuneta bully us into believing noodles is not bad, that it's all we can afford.

When what we cannot really afford is letting a generation of ignorant kids grow up on instant noodles, NAPA or not.

And I am just talking about the campaign here. Imagine how much food - substantive, nutritional food - could have been bought for the elementary public school pupils with the money spent for those colored tarpaulin posters instead?

Or, for that matter, those life-size colored posters of every politician in every barangay and municipality? Who says the government doesn't have money?

I completely understand where you are coming from. Here in the states we are being subjected to "High Fructose Corn Syrup" (HFCS) ads. It is in EVERYTHING because it's cheaper to use than real sugar (pretty much all processed foods, i.e. junk food has it). They started the commercials because people are starting to use real sugar instead or stay away from junk food and because there is some controversy about the HFCS not being healthy. The HFCS TV ads state "studies show it's okay to eat...in moderation". Yeah, studies that the HFCS folks did and "in moderation" is hard when it's in everything! Sigh, you see, I rant about food as poison too :)

Thanks for sharing, Mrs. L.