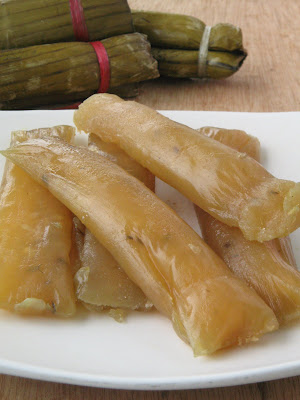 Pinais may mean a savory dish involving fish and banana leaves for some Filipinos. But for Pangasinenses, pinais refers to what is known as suman cassava, or steamed kamoteng kahoy rolls wrapped in banana leaves.

It entails a lot of work and so much brawn, as the cassava, a thick-skinned tuber, is peeled and grated manually. I don't know why, but grinders at the market won't mill it. I don't know how the cassava cake (known as budin in the Bicol region) makers manage to ground their cassava, or they probably they have a contraption for grinding specific to the rootcrop.

The cassava sport long, thick "roots" swirled in its flesh, which is difficult to remove in the uncooked tuber. They are included in the grated pulp, and provides chewy bits in the suman. 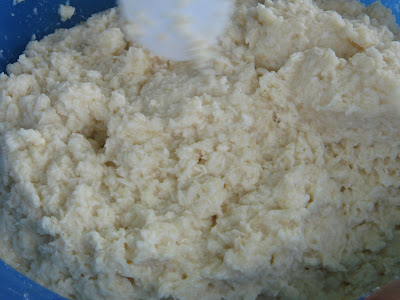 The grated cassava is mixed with sugar, refined white for a transluscent, almost transparent suman, brown for a distinctive, yellower hue. I like to liberally sprinkle the mixture with pounded anise seeds for that festive, licorice flavor.

Then a spoonful is put on the edge of a strip of banana leaf previously run over an open flame (making it pliant as well as sanitizing it), and shaped into a thin roll. The banana leaf is rolled to the other edge, the ends folded over and tied with strings. The wrapped rolls are steamed for an hour.

The cassava has a gelatinous consistency and texture when cooked. Because no water is added to the pinais mixture, it is a seamless, tight-packed suman. It smells of banana leaves, and is aromatic with the anise.

Cassava is a common, cheap rootcrop, and pinais is not considered a festive kakanin. Perhaps the cassava cake, with its decadent sweet layer. But the pinais can be made luscious, too, with additional topping of latik, even chocolate fudge. It's actually apt, even thematic, in these troubled times.

This is actually my favorite kakanin and I miss it! I love it with bucayo in the middle. I didn't know it had a proper name, we just call it cassava suman

Gosh that looks so good. I've never tried these before.