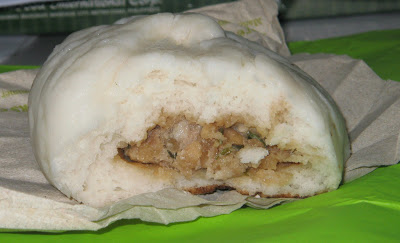 Classes in all levels opened one week after another starting on the first day of June, which happened to be a Monday this year. So for the last few weeks mothers have been shopping and shopping upon receiving the list of things needed for their kids’ school year.

I’m lucky that I still have a preschooler who goes to a school which provides all materials. I only needed to supply personal toiletries and stuff, all bundled in a pastel paper-wrapped box – but all these things had been required last year, so I only needed to unearth them from oblivion in the always messy playroom.

As for my eldest – he’s starting grade school this year, but looking at the list of materials he needed I saw no reason to hype myself up and go shopping big time. Especially since the two kids received trolley bags stuffed with school things as gifts from an aunt, and previous uniforms can still be used (they have to be ordered from the school, anyway). So I just visited the nearest bookstore and assembled everything in a night or two.

But for other mothers out there who needed loads of notebooks, papers, pencils, bags, holders, scissors and arts crafts, and other school materials, plus uniforms, for several kids, it would have been quite economical to make a trip to the veritable shopping destination that is Divisoria.

It is during these times that vendors at Divi, for short, make a killing, getting the feel that everything is alright again with this world. No A (H1N1) pandemic, no freakish weather, no economic crisis. The same goes during the few weeks before All Saints’ Day, gaining momentum as Christmas approaches. And before school year ends by March/April.

Divi holds and sells all things. And I mean all things. One street, or mall, specializing in one thing or another. It is the ultimate cheapo’s destination – everything can be had at unbelievably low prices, the products the same quality as those being sold in most generic malls.

It is quite interesting, too. Various trinkets and gadgets, which are guaranteed to malfunction in a day or two, abound.

But I don’t go to Divi to buy made things. I buy things there to make things. Materials for party favors and decor, ingredients and containers for party food, textiles for sewing curtains, bedspreads, pillows, mantles, odds and ends for Christmas ornaments that I get a kick out of making every year.

So luckily I avoid the mob, which can be monstrous and quite unpredictable, during peak seasons, except for Christmas shopping. I could go ahead and buy holiday favors in September or October, along with birthday party materials and candle-making paraphernalia, but products are also seasonal, and you’d be hard-pressed for choices when shopping out-of-season.

Not to mention the moolah allotted for seasonal shopping are also given seasonally. Which is important, because I treat any trip to Divisoria as an opportunity that should be maximized.

I don’t go there regularly, because it is such a harrowing, back-breaking experience managing the congested alleys under the sun, or rain (with mud to boot), people carrying piles of boxes and loaded pedicabs jostling for every inch of space anywhere and everywhere, that I usually need months to condition myself and months to recover afterward.

Of course the blame is partly mine, since I have to maximize due to the irregularity of my trips, I tend to buy much, much more than I could actually carry home. So in addition to whatever I go there for, I include kilos and kilos of fruits and vegetables, dessert ingredients, household items, toys, ponytails and other girl stuff for my daughters, and whatever are laid out on the pavements that attract my attention, which are usually a lot.

Cheapskate that I am, I take the view that bringing a car would negate the savings I would accumulate from buying at Divisoria because of the fuel expense, plus finding a parking space is an additional stress factor.

It is best to go to Divisoria early in the morning, when the traffic is still manageable and the crowds are still thin. But no matter how early I go I end up trolling the alleys and stalls til evening, which is when it really gets interesting (the regular stalls close at 6PM but vendors lay out ingenious stuff along the roads by dark). By that time I am ready to collapse, with sheer exhaustion from lugging loaded plastic bags, and hunger. Because, frankly, there is no decent eating place in and around Divisoria.

The few fastfood joints are scattered too far away from one another that I usually think it is not worth walking there with blistered palms from all the bags and an aching back from my huge backpack.

But a few years into my Divisoria treks (started in earnest after I got married), I had learned to manage shoppping the whole day, with fried siopao. 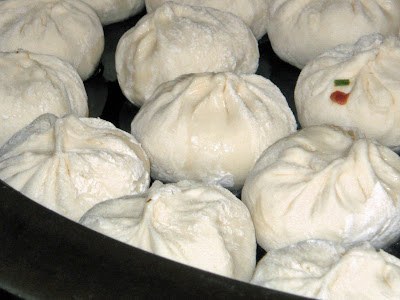 laid out and ready to cook
Specifically, Keeann's fried siopao, virtually a street food made, cooked and vended in a small stall in the heart of the shopping district. I had first seen, and bought, ready-to-eat fried siopao walking along the length of Ongpin Street in Chinatown, but I had since discovered that Keean's freshly-made on the premises fried siopao is a great way to tide me over one whole day of shopping, right within the location of the stalls I frequent.

It is not the usual asado-filled siopao, with large chunks of pork fat, but a soft bun containing lean ground pork sauteed with chives and finely chopped jicamas. Crunchy, a bit sweetish with salty undertones. The siopao I prefer.

The fried tag gives the siopao dough a sightly burnt bottom, but otherwise it is not much different from the common steamed buns. I suspect some form of seasoning - light soy sauce, perhaps - is added to the sauteed filling, so that the steamed buns are saucy enough and do not need the requisite siopao sauce. 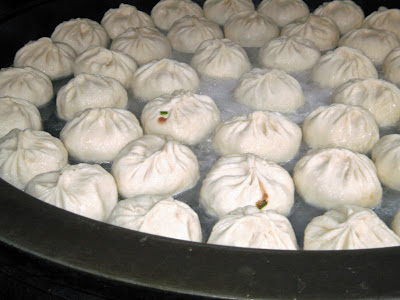 steaming merrily away
At P15 a piece, the fried siopao is so Divisoria, cheap and Chinese, but filling and satisfying. I usually buy one mid-morning, stop by again by mid-afternoon for several more to bring home, gobbling another piece on the road while I contemplate the things I bought, and the things I will make of them. And plotting the next trip to Divi.

I am Siopao lover,Whenever i go to mall i always buy siopao as pasalubong.

if you want the best try SHANGHAI FRIED SIOPAO in Ongpin st. is the original fried siopao. they are a lot better than kean's. That store has been sellling scrumptuos fried siopao since 1987! try it out. it has been fetured in new papers in blogs over the net..

Hi Gale, may I know where exactly is Shanghai Fried Siopao in Ongpin St.?