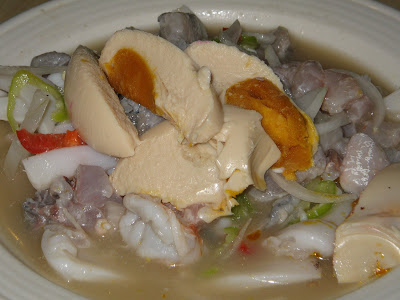 Seafood Kilawin with Itlog Maalat
Out on the beach with no baon and not exactly in the mood for grilling? Order inkalot a bangus (grilled milkfish) from the many houses by the roadside parallel to the shore. But if one prefers an entire spread of Pangasinan dishes at minimal effort, there are actually restaurants along Bonuan beach.

The most famous is Matutina's restaurant, which grew exponentially upon its reputation (the favorite of the incumbent President). From a single nipa hut it expanded to five outlets and a non-beach branch along McArthur Highway in Urdaneta City on the way to Baguio. Beside the original hut a fancy concrete affair rose just across the regional office of the Central Bank.

I've eaten there about twice, first when the nipa hut just opened, and second inside the fancy castle more than two years ago. The food is Pangasinan cuisine at its best. I wasn't running a blog yet the first time, and the second time I neglected to bring a camera. Most likely I won't go back there soon, so unfortunately I cannot feature the restaurant.

As I said the food is representatively Pangasinan cuisine done well. But I won't be eating there again in the near future for two reasons. First, I cook at home, and all my relatives and in-laws and friends cook. And we do the marketing ourselves, so we know the actual cost of preparing food. Which brings me to the second reason - economy. When you cook, the prices of food prepared in a restaurant that you can cook yourself at home becomes horrifyingly expensive.

Pangasinan cuisine is simple and everyday ordinary. The representative dishes are mostly seafood cooked briefly, the ideal way to taste the sweetness of creatures from the surrounding marine waters, and vegetables boiled in bagoong. The festive dishes are ones that are shared with the rest of the country, mostly with Spanish and/or American influences, so there is no need to sample them here.

That being said, it is understandable that we don't eat out a lot if we want local food. Since Pangasinan food requires no fancy cooking technique or any elaborate presentation, we just cook and eat at home. The best way to really sample food from the province is to force oneself on the hospitality of a local, who is more than willing to cook for visitors, anyway.

What's more, there's nothing more satisfying than indulging in a feast amidst the conviviality of your dining companions while lingering at the table without the sometimes wearisome presence of waiters, and not worrying about imposing on the hosts about the cost of the meal when you see a dish on the menu that you like but is prohibitively priced.

So the seafood restaurants, which do not exactly abound in Dagupan City and other towns, are for out-of-town visitors, and serve as a place for marketing officers to entertain their customers.

Such is Silverio's, a good alternative to Matutina's, and which actually has an edge with its nightly live band performers. The ambience is entirely different, though. The joint, made with local materials, is shaped like a pointed hat, with bamboo posts instead of walls along the hat's "brim" so air circulates freely. It is also a few kilometers from the beach, so instead of a seaview the restaurant is surrounded by fishponds. The diner can opt to eat al fresco on a patio down a few steps from the main dining area.

I actually like the vibe better at Silverio's. At Matutina's castle the ceiling is quite low, and the small rooms can be a bit stifling. These contribute to the unpleasant noise level, which sometimes can be intolerable, especially when you happen to dine there along with those marketing officers out to impress clients.

Apart from the grilled bangus, here are some dishes we sampled at Silverio's. My meals here, same with my meals at Matutina's, were all courtesy of friends and relatives. As I said, I cook at home. And I'd be glad to cook these same dishes for anyone visiting Pangasinan. 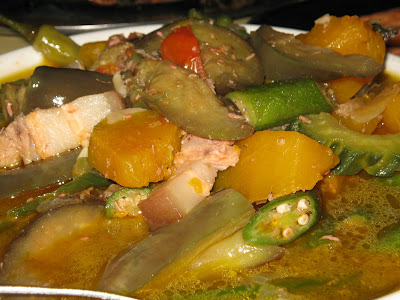 The pakbet, or what is called pinakbet in Tagalog, at Silverio's is not done the way it is done in Pangasinan homes - steamed with bagoong isda or alamang, but more like a Manila version - sauteed, and with cubes of squash. 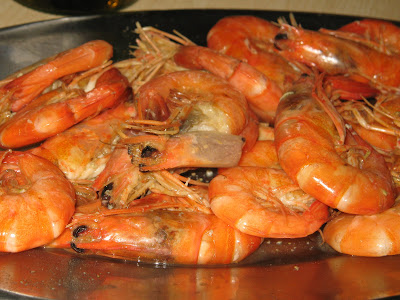 Steamed shrimps. Dipped in spiced vinegar, this is as good as it gets. The steamed oysters, served unshucked, are phenomenal, too. And don't forget to order a plate of ar-arosip and tomatoes to go along with the grilled bangus, these shrimps and the oysters. 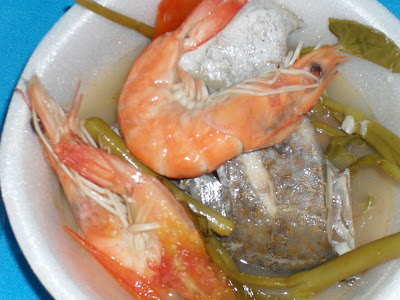 Any meal in Pangasinan would be sorely incomplete without inselar a malaga tan orang (siganus and shrimps in soured broth), boiled briefly with ginger, soured with tomatoes and sweetened with a sprig of celery. One of the ultimate ways of tasting what the province has to offer.

I didn't realize Matutina's have restaurants. But then again like you, all family the members can cook Pangasinan cuisine so we tend not to go to restaurants that cater such. We always buy boneless bangus at their shop along bonuan on the way back to Manila. And yes, we use bagoong isda for our pakbet. Mananam :) Oh i miss all these foods as hubby and daughter doesn't eat/allergic to all the foods mentioned.

Yes Jane, right beside Matutina's shop there is a pink/green two-storey building that looks like a house, you can dine there, although I've heard the food at the branch in Urdaneta City is better.

i totally agree. matutina's main is a bit of a let down. but on their urdaneta branch, ay, the milkfish is grilled to perfection. the sinigang na malaga is well soured. truly an unforgettable meal for hungry credit reviewers and a nice stop on the way to baguio.

Thanks for the confirmation. I actually haven't eaten at the Urdaneta branch.

Couldn't help but smile as I read this post :) Comfortingly familiar food. Haven't had malaga in ages!

We went to Silverio's last summer. It was a total disaster. Soo many flies there, oysters served to us were not fresh, very smelly. When we ordered bangus I was imagining perfectly grilled,fat bangus.What was served was cold, thin and very small bangus. :( Never to go there again!

My, that's bad. Due to the open-air structure there's bound to be flies, but that speaks a lot about the sanitary practices of the restaurant, too. I hope you asked for a replacement for the oysters, as not-so-fresh ones can be deadly.