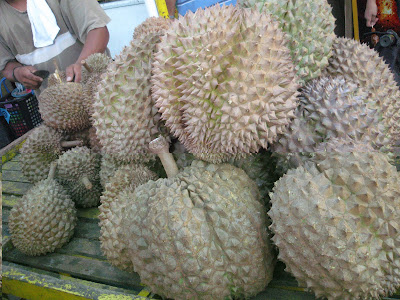 Everybody who had been to Davao always had this line to tell me - the smell of durian assaults you the moment you step out of the plane.

I’ve never been to Davao before. Besides being too far from Manila so that airfares were never slashed down, and because there are no natural wonders, like a nice beach or a waterfall or a raging river or a thick rainforest, that beckon to me, except of course Mt. Apo (the country’s highest peak) which is beyond my proficiency level at the moment, I never pursued any trip to Davao, dreading the thought of breathing the (in)famous scent every single second of my stay in the Philippines’ largest city.

I’ve eaten durian only once before in my life. Only a tiny morsel, and that was enough for me. While every single personnel working on the floor where my office is located mobbed the highly odiferous fruit sent from our Davao branch, shoveling into their mouths handfuls of the stinking flesh like a pack of dogs that had not eaten for days, eyes rolling upwards and mouths agape, I took a bite, and retreated.

It was like eating butter redolent with raw garlic. I like butter, and I adore garlic, and I love them together in anything savory. But to find the combination in a fruit is nothing short of bizarre.

Friends, and durian fanatics, insist that I sampled an inferior fruit. And I always countered that, well, I’ll never know if it was inferior, because, well, I vowed I will not have a second sample to compare it with. 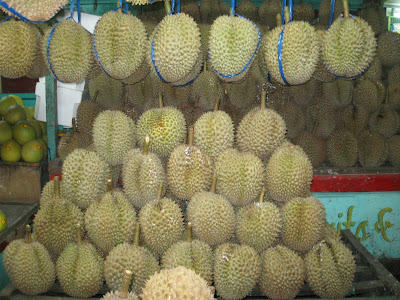 But stubbornness is a punishable trait, I’ve learned early on in my life. Perhaps my employers became aware of my unstinting narrow-mindedness when it came to Davao’s pride, so they sent me to the city. I bargained for a balikan trip (outbound and inbound flights within the same day), but compromises have no place in a chastisement, so I was in Davao longer than my usual 24-hour out of town trips.

I always maintain a modicum of honesty, so when I arrived in Davao and the first thing that the locals asked, even before querying about my flight and all, was how I felt towards durian, I answered truthfully. I wasn't surprised when everybody declared that all out-of-towners couldn't leave Davao without first partaking of durian.

It didn’t help that on that trip I was with two crazed durian lovers, who had to pass by the fruit stands each and every night of our stay to get their durian fix. As I was a lowly subordinate I had to go along with them on their post-dinner trysts. 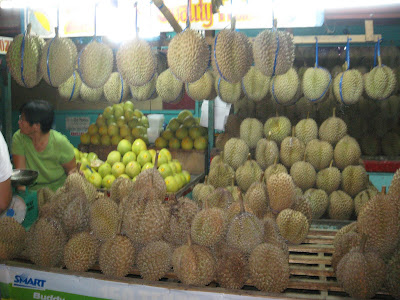 On my first dinner in the city our hosts ordered durian float for dessert. Incorporated in any dessert, I can tolerate durian. In fact I eat durian ice cream. But the durian in the float was so pungent it was barely dessert.

Curiously, though, the locals hardly finished theirs, while we were constrained to scrape clean our individual dessert plates. The reason - they only want the fresh fruit, not gussied up in any fancy dessert. Such hardcore loyalty impressed me.

And so they proceeded to take us to the fruit stalls, which were receiving truckloads of fruit delivery at 9PM.

Plastic tables and chairs line the road ready for hotel-based out of towners, as hotels don't allow durian inside their premises. The vendors carefully choose the ripe ones, break open the fruit for customers, and hand out plastic bags. You insert the plastic bags over your hands to handle the pulp, if you don't want to be prevented entry by the hotel security guards. 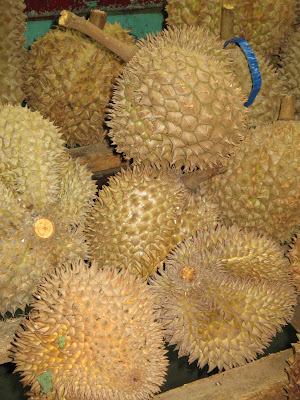 First lesson: there are many varieties of durian. The varieties are distinguished by size, the shape of the fruit, the length and sharpness of the spines, down to the color of the pulp and thickness of the sections, and the pulp-to-seed ratio. And of course eventually, the smell and taste. 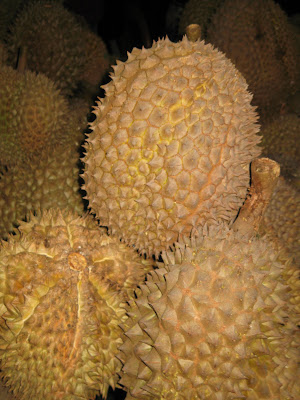 And there, to my chagrin, I realized that everybody was right. That what I had previously tasted was an inferior fruit. On my first night alone in Davao, I had sampled three varieties (Cob, Yellow Cob, Arancillo) and they were all, ambrosially, sweet. 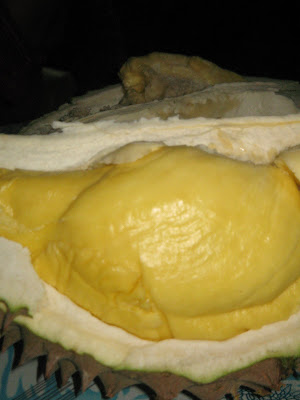 Sweeter than langka (jackfruit), but with the same pungency, though durian pulp is soft as moist cotton, the fibers fine and smooth.

The next day we were able to sample the Puyat and Lacson varieties, and they were also very sweet. That pungent flavor actually is addicting, and now I can understand why people wax crazy about this fruit. 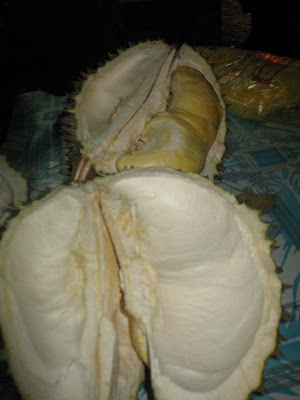 During conversations with the locals, I found out that their preferred variety is the native one, which was the variety used in our durian float, and is not very sweet, with a very small pulp-to-seed ratio.

My companions went crazy and wanted to try the native variety.

I don't know what happened to me. But I wanted to taste that variety, too. We almost missed our flight back to Manila because we first scoured the city for the native variety, an hour before our flight schedule.

We didn't have any luck, and had to check in (we were the very last) for our flight.

Now I'm always on the alert for any trip back to Davao, and constantly checking promo fares.

My husband loves eating Durian, he could eat one whole in 1 sitting. I remember we were in Phuket last year and we couldn't find durian. He's kind of disappointed.
Happy weekend!

Finally, you are eating one of my favorite fruits! Way to go kalad!