Davao is Not Just Durian 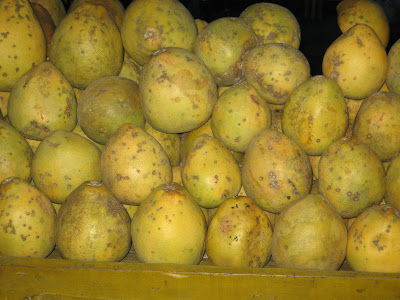 Davao is fruit-land. It is home not just to durian but many other fruits that are not ordinarily found anywhere else in the Philippines. Davao pomelo, for example, is a class of its own among all other pomelos growing around the country. It is the sweetest, perhaps because of its size - it is one of the smallest - so the sweetness must be from concentration of flavor.

The average size is slightly larger than your two hands cupped together. The segments are pink, the juice has no trace of acidity, the seeds minute. All in all very kid-friendly, so I was constrained to buy crate-fuls of them to bring home to the children. And of course it is the kids' favorite, as the husband had carried or shipped crates of Davao pomelo to us whenever he had been in the city.

Photo above was taken from a pomelo mobile stand outside the shopping mecca Aldevinco, at the junction of CM Recto and Manuel Roxas Avenues. At Php40 a kilo for three to four pieces a kilo, it was the cheapest we got in all of Davao. Pomelos at the durian stands beside Magsaysay Park were selling for Php70/kilo.

Note that the pomelo skins were speckled. I spent quite some time talking to the vendors about the quality of the fruits, and they spent an equally devoted time explaining to me about the difference between a speckled fruit and a flawless one.

There's basically none, because the cottony rind between the skin and the fruit pulp is thick enough to insulate the edible part from any external damage. But the immaculately-skinned pomelos carry a premium because they are perceived by buyers as the better, and undamaged, fruits. They even broke open samples from both camps and offered them for a taste-test, which proved them right.

The flawless ones were going for about Php20 more, so I got the speckled ones. They are the kinds I now hunt for whenever I see pomelos being sold in and around Metro Manila.

To save on space and possible charges for excess baggage I asked that several pomelos be peeled. For every four pieces peeled about a kilo was removed from the total weight, which, considering the volume I bought, was not bad at all. But I didn't have everything peeled, though, because I was told the pomelos would sweeten more unpeeled. And I was instructed not to put the peeled fruits inside the refrigerator to prevent them from drying out. 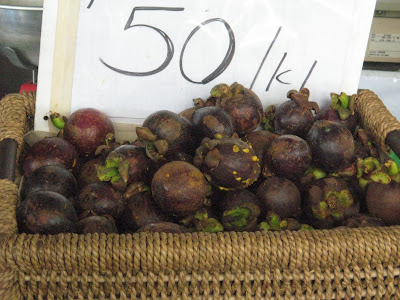 Mangosteen is another fruit we lesser mortals living in Luzon are not privileged to have in abundance around us. So whenever I am in Mindanao or in the parts of the Visayas that are close to the island, I try to bring home as many kilos of mangosteen as the airline allows. Especially now that there are documented studies of the super-nutritional value of the fruit.

Mangosteen was selling for Php50 a kilo when I was in Davao, but I think this has gone down quite a bit nowadays as the fruit is now in season. Fruit concentrates and supplement pills were also being sold, as well as the dried rind of the fruit, which piqued my interest quite a lot.

It turns out the dried rind are used to make tea, because that is where the supernutrients are actually found, not in the edible pulpy seeds. At Php35 per kilo ready for transport in a sealed plastic bag, they come in cheap, but I didn't buy because I decided I'll just save the rinds from the fruits that I bought. 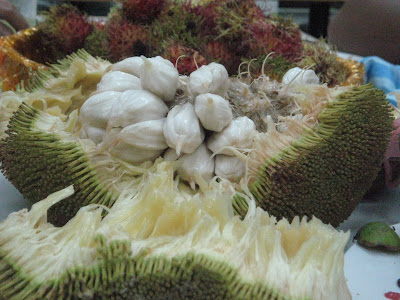 Marang and rambutan from Kidapawan. I first tasted marang in Los Banos, Laguna, which province is also a known producer of rambutan. But the Kidapawan variety is vastly different - the flesh more firm, still sweet but not as sugary sweet as the Laguna variety, and the seeds bigger. 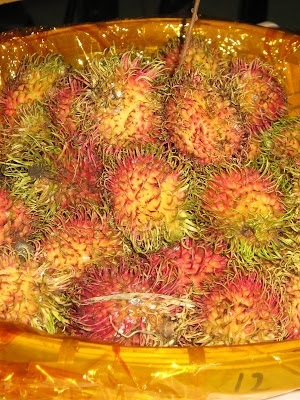 Mangoes in Davao are more like their counterparts in other Southeast Asian/Asian countries, both in taste and size. The taste is just like the variety called Indian mango, or even apple mango, very mild sourness when unripe, but medicinal in flavor when ripe, which we don't like to eat in Pangasinan.

But these mangoes are humongous. As in immensely humongous. Those are durian fruits beside them, and they are even bigger! 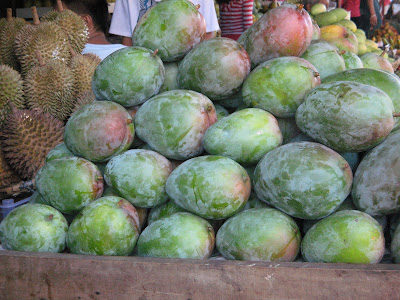 Dwarfing a heap of dalandan. 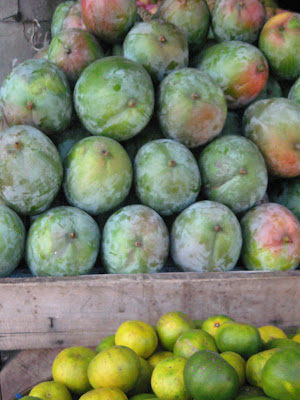 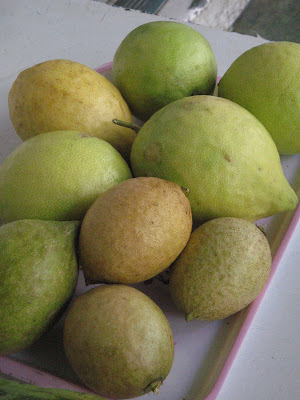 Extra-large "American" green lemons (as labeled by the vendor), from Samal Island. The biggest is almost the size of a Davao pomelo. The flavor is not as bright as a lemon's, though. More like a lime. 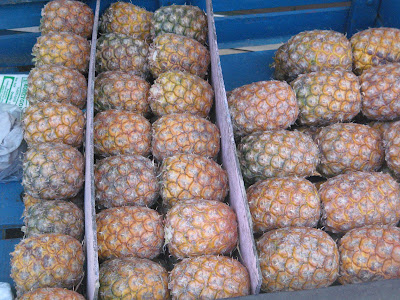 Pineapples in Davao are bright orange, not the pale yellow we commonly encounter. But they are of the small, sweet variety. One mobile cart vendor has an ingenious way of skinning them - employing a sharp bolo to carve a cylinder from the inner fruit core, doing away with the labor-intensive business of carving out grooves to remove the "eyes." 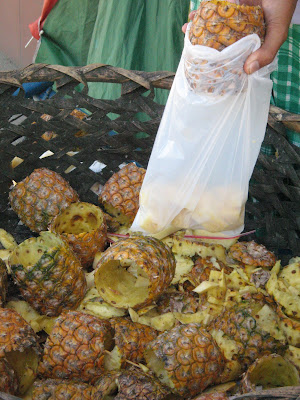 Missing rambutan... I wish I could visit Davao someday, my cousin lives there with her family.