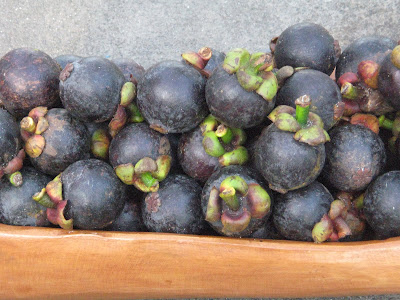 This year there must be an incredibly enormous bumper crop of mangosteen, Garcinia mangostana L. (elsewhere known as purple mangosteen to differentiate from other varieties, which I haven't come across yet in the Philippines), that legendary fruit pined for by people living in the higher latitudes because it only grows in tropical climates, and only in this part of the equator.

Never have I seen so many carts heaped full of the fruits around Metro Manila in all the twenty years I've been living here. And it's unbelievable that they're selling for Php40 a kilo (down from the Php50 retail price when they started appearing in Metro Manila).

I was in Davao recently, just before mangosteen season, and I brought home boxes of the fruit for Php50 a kilo, which I think is the normal going price in Mindanao and the Visayas for the first half of the year (at least from my experience). Maybe nowadays they're selling for Php5 a kilo, which, friends tell me, is the normal price when the fruit is in season. 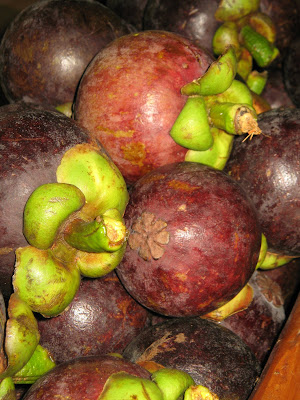 Of course the mangosteen currently in a deluge plaguing Metro Manila are small relative to those I've brought back from Mindanao and not of the best quality (a lot are inedibly hard, and some are bland), though I think since they all come from the island maybe the bumper crop this season was responsible for the size of all mangosteen this year.

It has been my observation that when a certain fruit is in hyper-abundance during a specific season relative to the average years, the size usually shrinks. Much like when a litter of puppies is beyond a dozen or so the cuties are smaller than those say coming from a litter of only six. 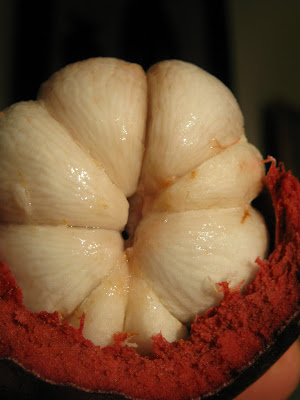 But no matter. In the past I couldn't see why I should shell out an average Php180 to buy a kilo of the fruit, usually found only at the fruit stands along the roads to Tagaytay City. Now I buy five kilos (the most I could carry) any one time every chance I get. Even if the fruit basket at home is still full of mangosteen, because the edible part is not that much, and my daughters have become quite the mangosteen addicts. And who knows when the downpour might suddenly cease? 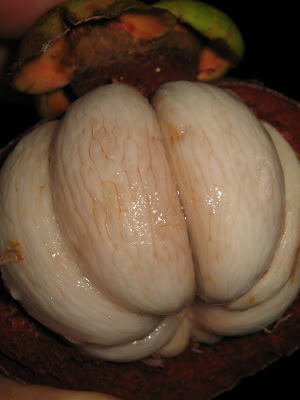 I've become quite an addict, too, God help us when this is all over and the fruit disappears from the streets and there would be no opportunities for me to travel to Mindanao in the near future.

The fruit is a titillating thing to eat, is why. The seeds, called arils, are sweet, with a pleasantly, piquantly tangy edge to it. Westerners have waxed poetic about the taste, but have miserably failed to exactly describe it, comparing it instead to various temperate fruits or a conglomeration of several of them. Succulent, sweet, citrusy, and molar-numbing, that's as far as I could go.

The arils number about four to eight, totally edible save for the biggest one, which carries the actual seed and can only be eaten boiled or roasted. To get to the arils break open the rind by squeezing it with your two hands, halving it. Hands and the tips of fingernails are usually stained magenta in the process. Some employ knives to score a shallow cut into the rind to aid in halving it. 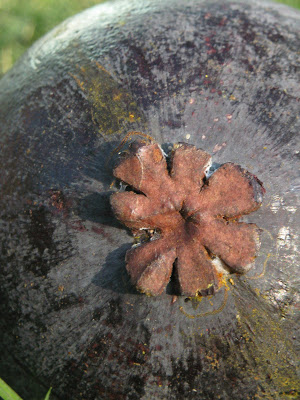 At the bottom of the rind (the endocarp), the number of these "petals" correspond to the number of arils or edible segments of the mangosteen. 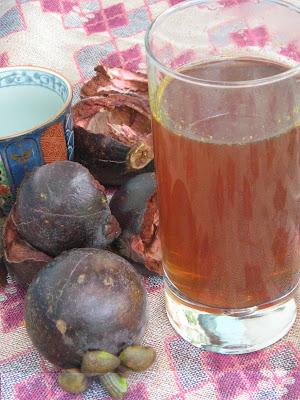 It might seem an actual waste to be eating only a small portion of the fruit. The endocarp, or the rind, is thick and takes up quite a bit of the fruit's total weight. But it doesn't matter, now that I've seen the rind being sold separately in Davao.

I've instructed the children not to throw away the rind but to save them in an uncovered container, and we boil a couple pieces at a time. The infusion is colored a bright magenta when fresh rind is used, dulling to amber with rind that have dried, with some yellow "curds" from the sap.

I strain the infusion, and add it to brewed tea to be drunk cold (as in iced tea). There is no distinguishing flavor, so it is a versatile addition to any other drink. I mix it with our daily kalamansi juice, too. And sometimes, I include a few pandan leaves, or a stalk of tanglad (lemongrass) in the infusion for a refreshing drink during noontime meals.

But why bother at all?

It is because of Xanthone, a naturally occuring chemical substance from plants (polyphenolic compounds) that are hyper-powerful phyto-chemicals. And phyto-chemicals translate to anti-oxidant activity. The mangosteen rind has been found to be abundant in xanthones.

This site lists 34 benefits to be derived from the rind. But basically it's all about the anti-oxidant property, which has been linked to the prevention of cancer, because xanthones break up leukemia cells. These xanthones are only present in the mangosteen rind, and none in the arils. So the waste is more important than the edible part.

That's why I buy mangosteen, and I feel so privileged that they're here in Metro Manila. We enjoy the sweet, citrusy taste, and benefit from the rind. And now I realize that even though the season may prove to be short-lived (but I'm praying otherwise), we'll have the rind to sustain us til next season.

Hello Kai, I live in San Diego and I meet a lot of PangaLato's living here, US Navy personnel. We have a hard time remembering the name of a siniguelas-like fruit the Thai's call Makok, Bangkok's original name.It was sold at school entrances, the dark green skin is peeled and sprinkled with salt. Ovate shaped, the size of 2 siniguelas, after eating the pulp, the seed has unique soft filamitous spikes. In Bangkok, I ate it fresh with chili salt and also pickled. We have a big bet on who name's it first. Help!!!
Love your blog, so well written, so U.P. All the best Christmas wishes to you and your family.

Shucks, when did you go to school? Hahaha, we didn't have that kind of fruit, we picked up mabolo from the huge trees, or makopa, or chiko, or bought water chestnut. I googled makok (makok farang, which is close to your description), and I don't think I've ever seen that kind of fruit my entire life. Hope you find the name, and when you do, please point out where I can find it, too. Good luck! And Merry Christmas to everyone in San Diego!

It's a delicious fruit known as makok in Bangkok.

Makok fruit is what we call CHICO in manila

Hi Jericho, I'm getting confused, because according to flispter makok is green, and we eat chico when it has turned ripe-brown.

Hi! Me and my groupmates are conducting a research about mangosteen and ginger. However, we cannot find any mangosteen here in Muntinlupa, we even checked it on divisoria but to our dismay there's none there. I'd like to know where exactly in Manila did you buy mangosteen and do you have other locations to suggest that are near manila? Thanks! Your reply will be a huge help for our team.

Where can I buy mangosteen in metro manila?