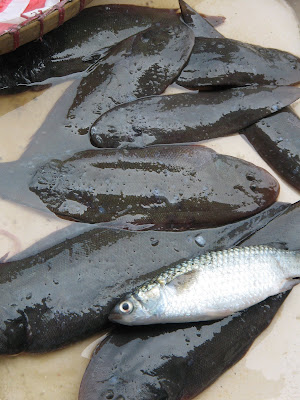 Not a lot of fish can be found at the market in Cavite lately, just the usual caballas (mm-mm), small yellowfin tuna (mm-mm), tilapia (from Batangas, mmm!), bangus (from around here, noooo!), squid and talakitok(expensive). 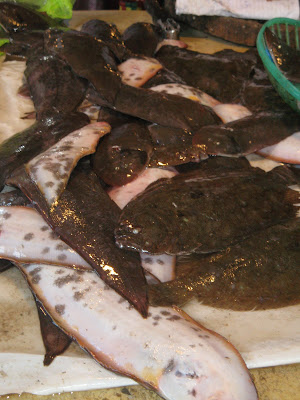 I'm missing small tulingan, dalagang-bukid, asohos, even galunggong and blue marlin. Only two kinds of shell abound - clams and mussels, but the clams have disappeared, while mussels are quite plentiful and cheap.

So I'm forced to beef up our weekly diet with meat, and look more closely at some species I normally ignore, either because I'm not familiar with them, or because I don't know how to cook them. 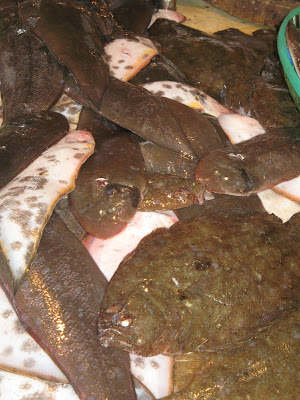 These first two weeks of January saw banyeras of dapa (sole) and palos (moray eel). I don't need to include in my new year resolutions "trying something new," because I'm always onto anything new, but the start of the new year is just jiffy to try something I consider exotic, and previously unknown.

Both tongue sole or tonguefish (family Cynoglossidae) and a kind of flounder were heaped together on the tiled counter this weekend. The vendor told me each has its own fanatic base, but she herself prefers the tongue sole. 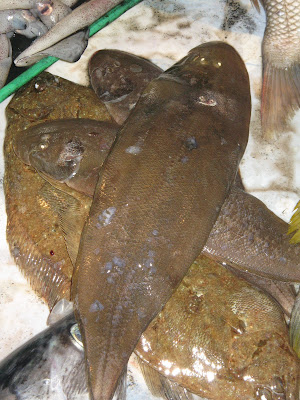 She also said that to have something unfamiliar, it is always on the safe side to fry. But that dapa are best cooked pangat sa dilaw, which I now believe to be the favorite way of cooking fish in Cavite - briefly boiled in vinegar with garlic and turmeric rhizome. 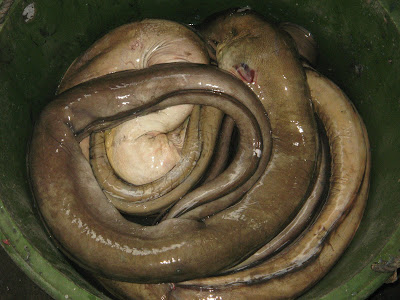 And there was also malabanos, the local term for a kind of palos or igat (family Muraenidae). I usually see them "dressed" - already cut-up and bathed in the lemony hue of turmeric - but this morning I chanced upon them whole and unmolested. 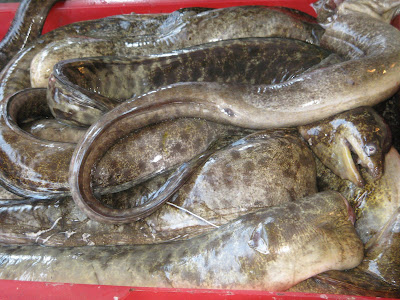 There were plain, unmarked eels, and there were patterned ones, not very fat but very long. It's going to be a very interesting week in my household.

This is some exotic stuff. I am looking forward to your sharing how you did with these Cavite finds. Who knew these could surface in bucaio? -louinsanfran

Oh but this isn't the first time. Try clicking the "exotica" category in the sidebar for my other wet market finds. Or try clicking this link.

We fried the dapa, to be "safe." The flesh was flaky, very meaty, the taste recalling pingka or espada. I'll try other ways of cooking it when I find some more this weekend.

I think you might be a wonderful advocate for some Philippine city to become a UNESCO City of Gastronomy. See this site:

Dapa fish is not sole, it is halibut.