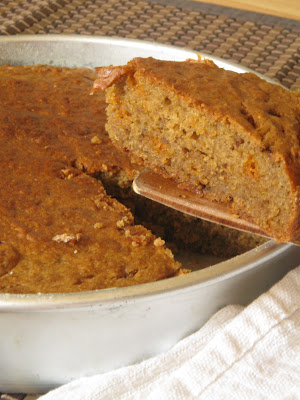 Because shiploads of green bananas from Mindanao were denied entry to China amidst the stand-offs at the Kalayaan Island Group (KIG) in Palawan, banana producers in Davao have been giving away subsequent fruit production. My husband had been to Davao twice in the last month, and he saw boxes and boxes of packed bananas being dropped all around the city, for whoever would like to have them.

Because my husband's office sends crews to Davao regularly, boxes of of green bananas, even pomelos, have been crowding desks and cubicles for weeks. We always ask him to bring us fruits from Davao, so he's happy to clear some desks at the office to oblige us at no extra cost.

The bananas were colossal, dark green, and rock hard. It took weeks for them to ripen. But when they did, of course, they had to ripen all at the same time. I had to put them all in the freezer peeled in a container. Interminably we've been having banana shakes blended with chocolate milk for breakfast, or with vanilla milk and guyabano. Mini pancakes, too, packed with mashed bananas and creamy with buttermilk, cooked in an egg ring.

The bananas kept coming, and kept ripening like they wanted to be frozen. I would have liked to make a banoffee pie, as green bananas would be perfect for it, but I prefer fresh bananas for that. So I made banana cake. But instead of the regular banana cakes I make, which I'm proud to note approximates the excellent banana bread made at the Baguio Country Club, I made a turon cake.
Turon is the quintessential Filipino snack cooked by the roadsides. Ripe saba banana halves embraced by a slice of ripe langka (jackfruit) wrapped in flour wrappers, sprinkled with sugar, and fried to a crisp. Caramelized crunch encasing a sweet, soft fruit filling, it is comfort food to the nth degree.

It is jackfruit season now, and we have bottles of tree-ripened fruit in the freezer, as well, perfuming the kitchen with their funky sweetness every time somebody gets ice or fish to cook. But I cannot cook turon, because turon requires saba, and the blackened saba at the market are not at all appealing. 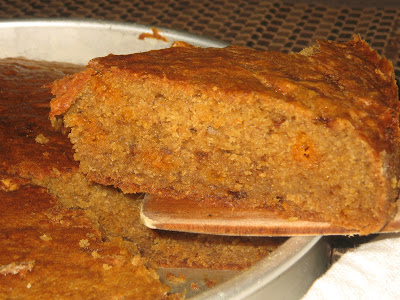 So it became turon cake. Sweet, rich, and buttery, this banana cake is laced with that peculiar langka scent, the banana sweetness edged with musk. I put in some butterscotch chips for a hint of caramel, and although it was cake-soft  all throughout without the crispy crackles of real turon, the varying dimensions of sweetness all came together in a cake that's good enough to defy threats to our independence as a nation in these enlightened, and civilized,  times. In the light of globalization, let us eat cake.

Sift together the flour, baking soda, baking powder, salt and powdered sugar.  Beat the eggs in a small bowl.


Beat together the butter and granulated sugar in a separate bowl, then beat in the eggs, bananas and langka. Add the combined dry ingredients and stir to mix, then stir in the butterscotch chips until evenly distributed.

Preheat oven to 180°C. Grease the bottom and sides of a 10” round pan with butter. Dust with flour, then shake out excess. Pour and scrape the cake batter into the pan. Bake for about an hour (start checking  at 40 minutes), until the top is golden brown. Leave cake in the pan for 10 minutes, then transfer to a wire rack to cool.

Adapted from the recipe for "Whole-Wheat Banana Nut Bread" from The Williams Sonoma  recipe book, Baking.

* Notes:
- I usually use the darkest granulated sugar I could find, called negro in the Cavite market slang, which is used for making biko, latik and other kakanin. This darkens the cake, but only subtly sweetens it, allowing the natural banana flavor to shine. I was trying to clean up my pantry, so I used up what was available, that's why there's brown powdered sugar and segunda in the recipe. White (refined) sugar is fine, but use sparingly, about 1/2 to 3/4 cup. I usually mix in 2 cups negro.
- Without jackfruit, this cake would still be astounding. The original recipe calls for a half cup of chopped walnuts.
- The original recipe also uses 2 teaspoons baking soda without any baking powder. I substituted half of the baking soda with baking powder to lighten it a bit and to balance out the extra moisture from the blended langka.

An entry to the Kulinarya Cooking Club Challenge for the month of June.
Posted by Kai at 8:36 PM

WOW! Turon cake! what a brilliant idea! I could imagine how it would taste...

wow! that's yummy! it looks moist, i like it!

Yes, it's so moist due to the surfeit of ripe bananas ;-)

Banana cake may be so simple and common but hubby and I love it!
But your cake isn't simple, Kai, so creative!

what a great ending to your story. let us eat cake. for us, in this era, the words of the queen can be made to work.

Turon flavored cake. I love it!

That sounds wonderful. Wish I had boxes of bananas to play with!

Just tried this cake today. Not really much flavor. Possibly more bananas? It's missing something