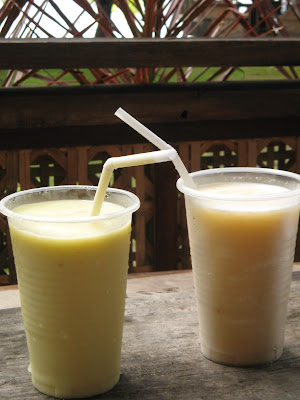 It's been raining for a month. Sure, there were days when the sun sizzled, the static air almost burning. But mostly it pours. Don't get me wrong, I love the rain. But it's unfortunate when I have to go to work with traffic at a standstill due to unsolvable road flooding, which is most of the time.

But I have enough memories of days in the sun - the sand tickling my toes, and the sound of gentle waves lapping the shore accompanying me wherever I go - to last me the next three months of the rainy season. 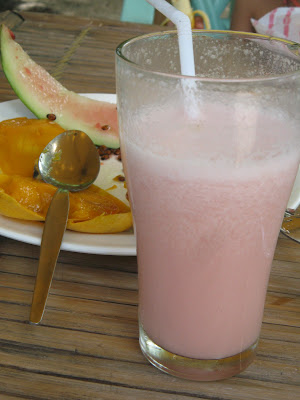 Bohol, in the central Visayas, is one of my favorite islands. I keep going back there, ever since I first    rode in an inter-island ferry to the Visayas more than two decades ago. The attractions - almost all of them natural - increase with the years that it doesn't run out of things to offer returning visitors. I've been there with friends, with family, and now it's the kids who perennially ask that we go back to Bohol.

But I go there now mainly to recharge. I've toured Bohol island several times, that now I just stay at one of the pockets of beach lining Panglao island, the small islet at the southernmost tip of Bohol, adjacent to Tagbilaran City.

By the eastern coast is Bolod Beach, which I find therapeutic. Restorative, in fact. It has a placid stretch of beach that remains flat and shallow for about a kilometer out to sea, and drains of the ocean during low tide. The fine white sand is powdery, and hoards starfish in a variety of color, size and texture.

The beach is not lengthy, just a few kilometers along a straight line, but it hosts accommodations  ranging from rated Class AA resorts down to family-managed properties. I've tried the whole spectrum of them, and discovered that where I check in doesn't matter, because the beach fronting each property is all the same - tranquil, serene at any season, the aquamarine waters clear and placid. 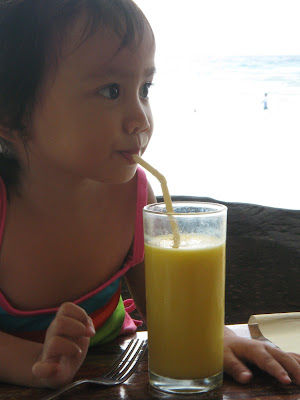 But as for the food - it's a different matter altogether. I found that the dishes served in the most expensive and the mid-priced restaurants didn't agree with the island vibe. Too fancy, and not really done well. In the end I decided to have  most meals from the grilling station right along the center of the stretch of beach, amidst day cottages, where seafood is treated simply, with minimal intervention.

It's called DBR Grill Station, because it's owned by the adjoining Dumaluan Beach Resort. It has a short menu, with grilled items taking center stage. We love the fruit shakes, with whole fruits and a drop of evaporated milk, that we start and end our days with them. 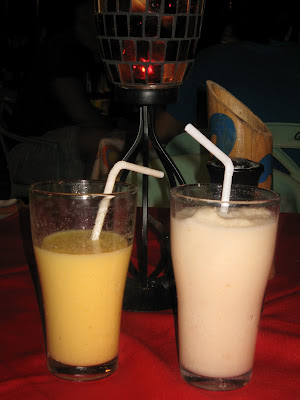 The mango shake is phenomenal, as well as the watermelon and avocado shakes. There is no fruit combination indicated on the chalkboard menu, but the attendants will do one upon request. There is even a nangka (jackfruit) shake, though I haven't tried it yet as it is rarely available. 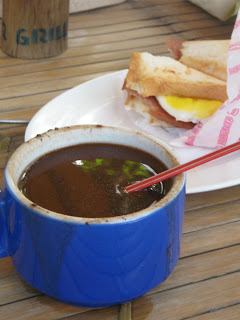 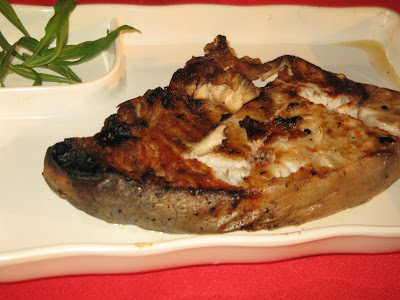 In Bolod we have our fill of the Visayan su-to-kil, the holy triumvirate of island eating - sugba (grilled), towa (poached, but more akin to tinola, in clear soup) and kilawin (raw steeped in vinegar). Seafood and marinated meats are arrayed on the counter, and you make your order turo-turo style, pointing and saying how you want it cooked. 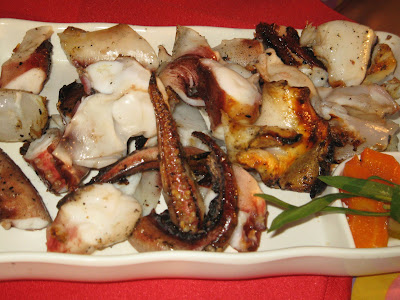 One night there was octopus, and my daughter wanted to try it over the squid. I warned her the cooks might not be that adept in cooking an octopus, but ordered it just the same, thinking we were in an island, with island people preparing our food. But as expected,  it came out rubbery. The squid was better.

Grilled items are served, interestingly, with pickled carrots and a small bunch of tarragon. On each table is a bottle of the default Visayan dip of mixed vinegar, soy sauce, kalamansi juice and chopped onions, pre-mixed and ready to pour. 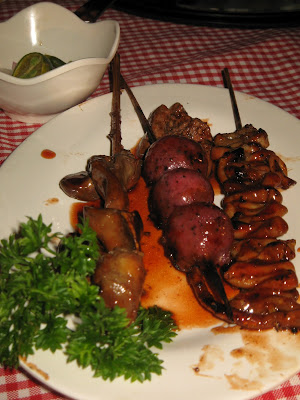 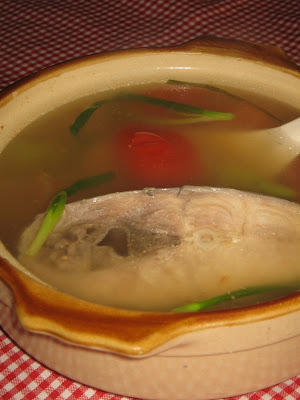 The towa is gingery and peppery with siling haba and spring onions, with a mild sourness from whole tomatoes added to the broth. 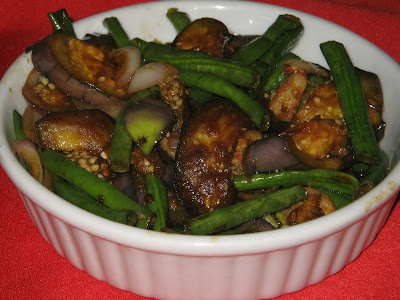 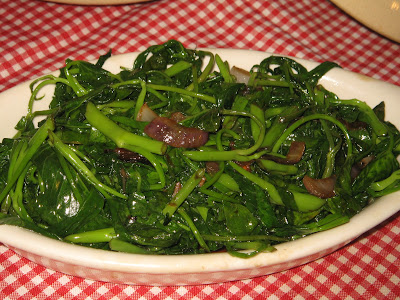 There are just two vegetable dishes - ginisang gulay, sauteed yard-long beans and sliced eggplants, and kangkong, sauteed swamp cabbage. We order them alternately, sometimes together, and both are awesome accompaniments to grilled seafood. 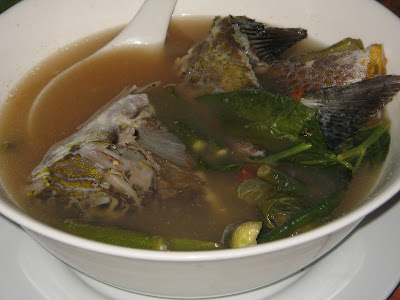 Three lodges away is the charming little property called Whites and Greens, a no frills resort offering a collection of native huts for accommodation. We come here for shrimps and sinigang na isda, which one time featured a large kitong (samaral, malaga) good enough for three people. 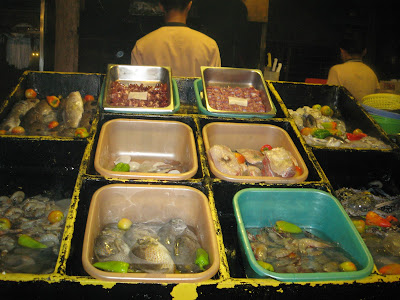 Inside the Dumaluan Beach Resort property, there's a beachside restaurant where I haven't eaten anything that I liked yet. During our most recent trip we discovered that they have added a grill kiosk  where seafood is also displayed and grilled in an open-air broiler. It is a more upscale version of the DBR Grill Station, selling premium fish and shellfish. 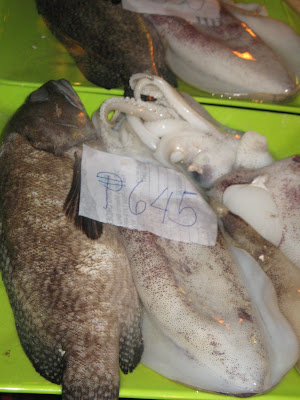 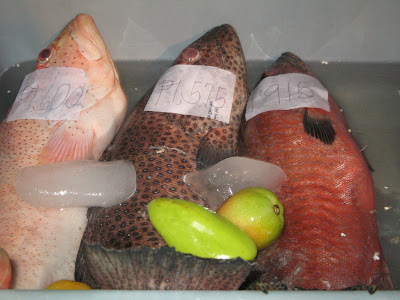 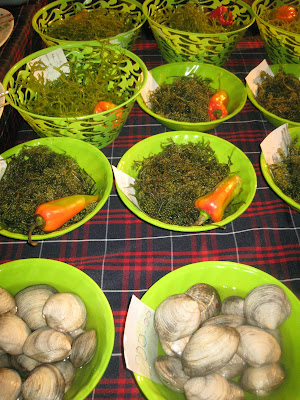 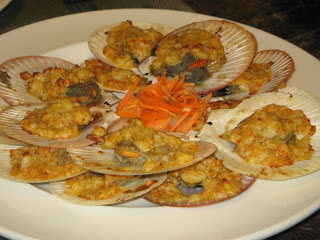 We dined there one night, lured by the scallops. At Php250 for 10 pieces, it wasn't cheap, but we love the shells, and can easily finish a kilo among ourselves along with other dishes. We had two orders baked, but regretted our decision when the dish arrived - we were barely even able to consume half of it. It was thick with bread crumbs and salty processed cheese that overwhelmed the sweetness of the scallops, rendering them inedible. 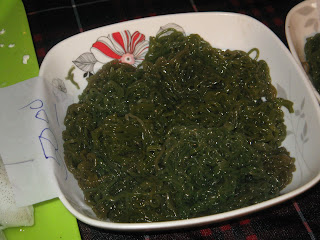 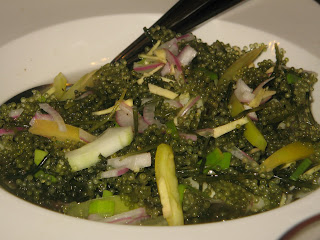 We were better off with the salads made with fresh seaweeds, doused with vinegar and paired with sliced onions and tomatoes. 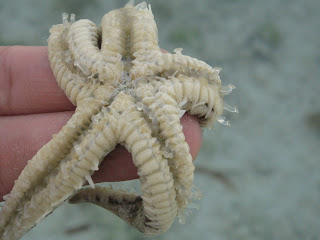 But no matter that dining opportunities jar at times, I only have to take a few steps down to the sand and the gentle beach is sure to ease my dissatisfaction, calming me. I become unperturbed, and resolve to have fruit shake and sinugba next time.

Thanks for this post. I have been searching for restaurants in Bolod area since I don't want to get stuck with just one place. The beach area looks fantastic. I feel though that food scene is low and may be too expensive given that most hotels around are 4 or 5 star. I've never been to Panglao and this may be the first. But is it similar to Boracay where you can easily walk to other restaurants?

Hi Jac, no, the restaurant scene is not as vibrant nor as varied as Boracay. This one is more laid back, and is not a partying venue. The more expensive selection in Bolod in the photos were from the restaurant at the Dumaluan resort, but beside it is a grilling station that serve more affordable but just as excellent fare. Bohol Beach Club's food is forgettable, and even more expensive. More homey and cheaper food is served at the other "mom & pop" lodges along the area, such as Whites and Greens.