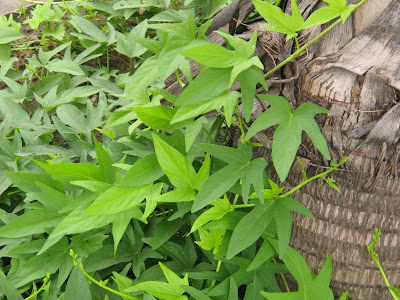 I expect there would be unwanted traffic for this post because of the title, and it is just a continuation of the laughs I got when I went to Manila for college and talked about this vegetable.


The title means kamote tops, or the young shoots of the sweet potato. In Pangasinan we distinguish this from other kamote varieties by the term kamote waklay (Ipomoea batatas Linn.). 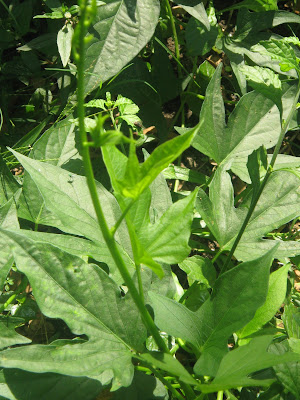 Kamote tops was one of the few vegetables I embraced willingly as a child. It was omnipresent - grown in the front, side and back of every house and just about anywhere there's a small patch of available soil. Consequently, it couldn't be found at the market, and it was just laughable to think of buying some kamote tops when it could be got everywhere. 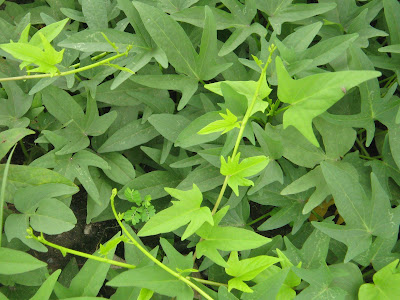 It was mild in taste, though a bit rough on a child's tongue because of the thick but tender stalks. We always had it in sinigang na bangus - milikfish in soured broth. The sourness came from tomatoes, or pias, and the kamote shoots enhanced it due to an inherent slight fruity tang. It was the unequaled backdrop for the bangus, with its milky-sweet flesh and rich belly. 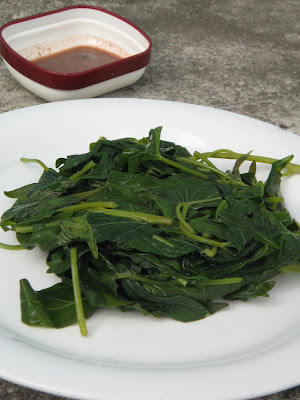 When I got older I was able to partake of the tops simply steamed, then dipped in bagoong Pangasinan squeezed with kalamansi. This accompanied grilled or fried fish, and rounded up a simple and rustic but exceedingly nutritious meal with hot boiled rice. 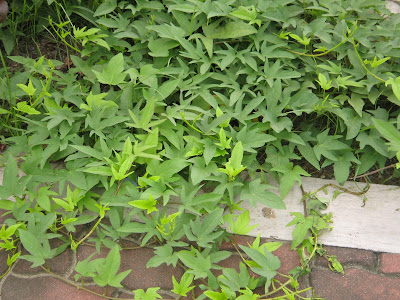 However, I only recently discovered that putting the tops in a soup is actually the optimal way to eat them, since the nutrients leach into the liquid. I've been advised that when steaming, the liquid should be drunk, so I mix it with our daily juice. 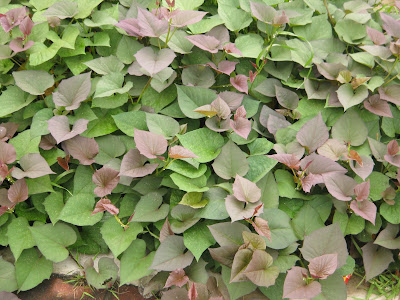 All﻿ my life I've only ever known the "puti" variety, as what the all-green kamote leaves are called in Metro Manila and its environs. It was only in Cavite that I came to know the red, or red-violet kind. Bicolano friends tell me the opposite - it is only this variety that they know. 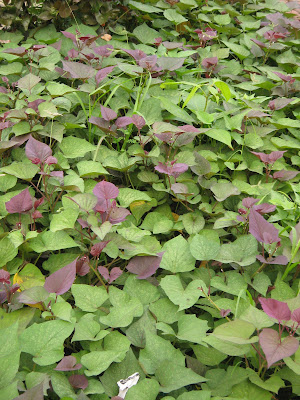 The red-violets can be ﻿very pretty. The young shoots come out in rogue, then turn green as they mature. Sometimes I come across all-red tops at the market, and they are quite striking. 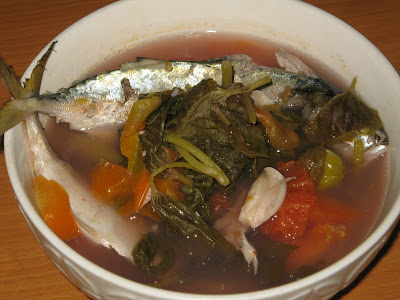 I was told that the sanguine kind is more nutritious, but I find I like the puti variety I grew up with. The ﻿red-violet stains the broth... 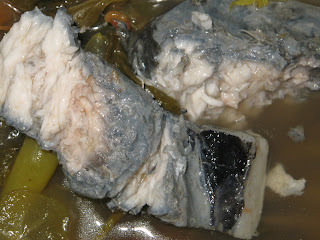 ...and dyes the fish an unappetizing blue.

Kamote leaves are one of five, aside from malunggay, organic, endemic leaves that are bursting with nutrients and have natural healing powers. I eat most of these bionic five, but  have just discovered some of them. I will be featuring them all in the next posts.


The leaves of the sweet potato are rich in Vitamins A, B and C, iron, calcium and phosphorous, and along with the tubers, are a good source of complex carbohydrates and dietary fiber. They are considered antioxidant, antimutagenic, antibacterial, antidiabetic, and also hemostatic, with spleen invigorating properties.

The kamote plant does not only benefit humans. It is one of a few believed to have the capability of regenerating nutrients in the soil. 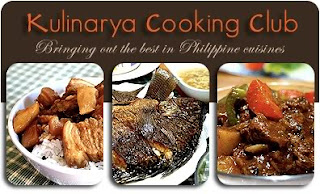 This is an entry to the July cooking challenge of the Kulinarya Cooking Club, of which My Expat Mommy and I were hosts. Our theme for the month was Pang-Habang-Buhay,  to give emphasis to vegetables and fruits we should be eating often, and in conjunction with the observation of Nutrition Month.

okay, i just got the kamote tops and the milkfish. i'm going to have some good sinigang for lunch! and then the steamed kamote tops with bagoong and lemon peres for dinner. life should be so good.

It should be so good, especially if you have unlimited access to kamote growing in your backyard!

May I have permission to use one of your photos of kamote tops in a book I am publishing. please? The book is about American POWs held in the Philippines by the Japanese in WWII. They were starving and Kamote tops was one of the foods which they grew to eat.
Thanks so much.