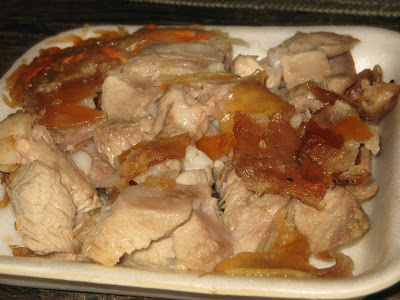 Tagbilaran City, the provincial capital, is the gateway to Bohol. The airport, which services only two flights per airline, is there (with plans of transferring to Panglao Island, which I hope with all my heart doesn't push through), as well as the major sea port that connects the island to the other islands in the Visayas and to Mindanao.

There is no Manila-based mall in Tagbilaran City, so there's not a lot of chain restaurants that can be found there. Consequently, most eating places have local roots, or are transplants from neighboring islands Cebu, Negros and Panay. There is a  small mall called BQ in the center of the city, which hosts some international chains along with the local eateries.

And it is at the BQ Mall where one can have, in my opinion, the best lechon in the Philippines. Proudly called Lechon Boholano,  it is sold by a small counter at the basement supermarket. Freshly roasted pigs arrive daily at 9am and 3pm, and it goes so fast that there is just a one-hour window to make a purchase.

I arrived at lunch one time to find painful disappointment welcoming me - staff cleaning out the  empty chopping board. The salesperson told me to come back in the afternoon, but neglected to inform me that up by the third floor there is a dining counter serving the lechon at the food court called Food Plaza.

The lechon was so full of flavor it didn't need to be salty. The fat was negligible, the toothsome meat tender, the golden burnished skin thin and crispy like it came from a suckling pig. For one unforgettably delicious hour I forgot about the seafood in Bohol. 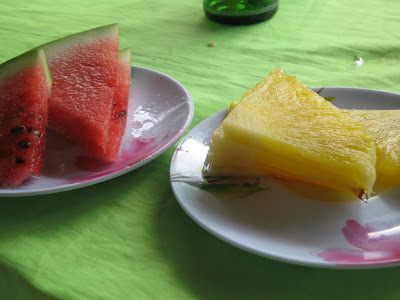 The first time I was in Bohol twenty years ago I stayed with friends for a few days in Loboc. The Loboc river already hosted cruises, but there were only two rafts then, and only during lunchtime. Nowadays river cruising is a seriously flurrying business with an indefinite number of rafts, several cruise operators, and hourly trips from daybreak until almost midnight that features song and dance acts by costumed children.

But man the food has not varied for the two decades that has passed. The same sloppily prepared and presented banquet that shames the local island cuisine. I wasn't impressed twenty years ago, and I wasn't keen on cruising again, but I had to take the kids, if only for experience. The fresh fruits were easily the best of the lot.

The cost for the packaged island tour - which includes the chocolate hills, the man-made forest of planted gemelina trees, a visit with the tarsiers and some languid pythons, managing a hanging bridge, and a stop at Asia's oldest limestone church and in Loboc for the river cruise, has shot up beyond the country's inflation rate. For me it can be bypassed, particularly for my adventurous family.

What the kids enjoyed the most was the trip to Danao town, in the northwestern part of Bohol, where the zipline goes above a chasm so deep it's spine-tingling. It's far from the usual tourist spots, so unfortunately it can't be lumped with the common island tour, but on the way back to Tagbilaran City from Danao the chocolate hills, the tarsiers and Baclayon church are along the way, which is more than a sufficient way of seeing the best that mainland Bohol has to offer. I'll go back to Loboc only if the esteemed Bohol Children's Choir has a performance. 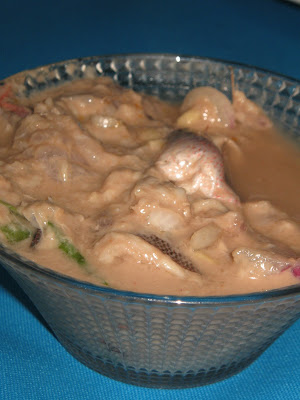 On my most recent trip to Bohol I attended the silver anniversary commemoration of the ordination of the parish priest of Dauis town, in Panglao island. There was lunch cooked by the local parishioners, and I felt lucky to partake of home-cooked food.

At the buffet table people were converging around this huge bowl of what looked like bagoong na isda, fillets of what looked like dalagang bukid skin-on heaped together in a brown thick liquid. I had to try some, and upon inquiry it turned out to be kilawin. It wasn't as sour as others I've tried, and must have been reposing for a while in its steeping vinegar. But it attracted more people than the lechon. 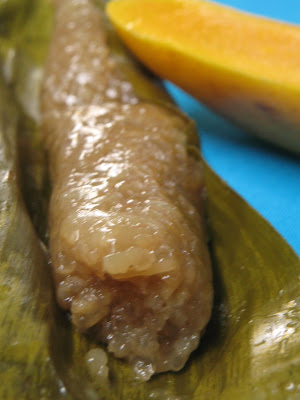 Suman dyed with the brown sugar made with it. It was sticky and sweet, but not so sweet that it was a joy to eat with the halved cheek of ripe mango. 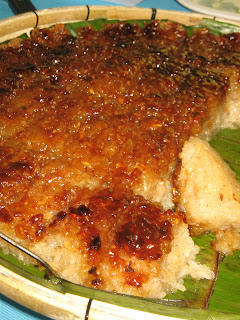 Bibingka, the Boholano version of latik, with a thin sweetened latik topping spread over the malagkit. That top was grilled below high heat, which resulted in a crusty latik that was almost crispy. It was so good my companions and I went back for seconds, and thirds, that we almost demolished the entire bilao. Now I know how I'll cook my own latik.

what a wonderful travelogue trilogy on bohol. it's like the one about lake sebu, sarangani, and cotabato a few months back. you had me on the picture of the lechon, but in the end, i'd like to try that kilawin and latik.
those fish prices in the first story of the series look a bit on the high side, but then again it's probably good for 10 given their size - which might make them a good value. i hope the meso-cyclone and the flooding in many places have not affected you too badly.

Not too badly, Lou, thanks, I just lost internet connection for a while.

The uncooked seafood shown in the Bolod Beach post were for the DBR restaurant, where we didn't eat because of the very high prices. We ate mostly at the DBR Grill at the adjoining property where the dishes didn't go beyond Php300 (grilled food photos).

oh all those kakanins and delicacies from Bohol look delightful. I have a best friend in Bohol who's been inviting me for years. After your post, I'm convinced I must go. Thanks for sharing!